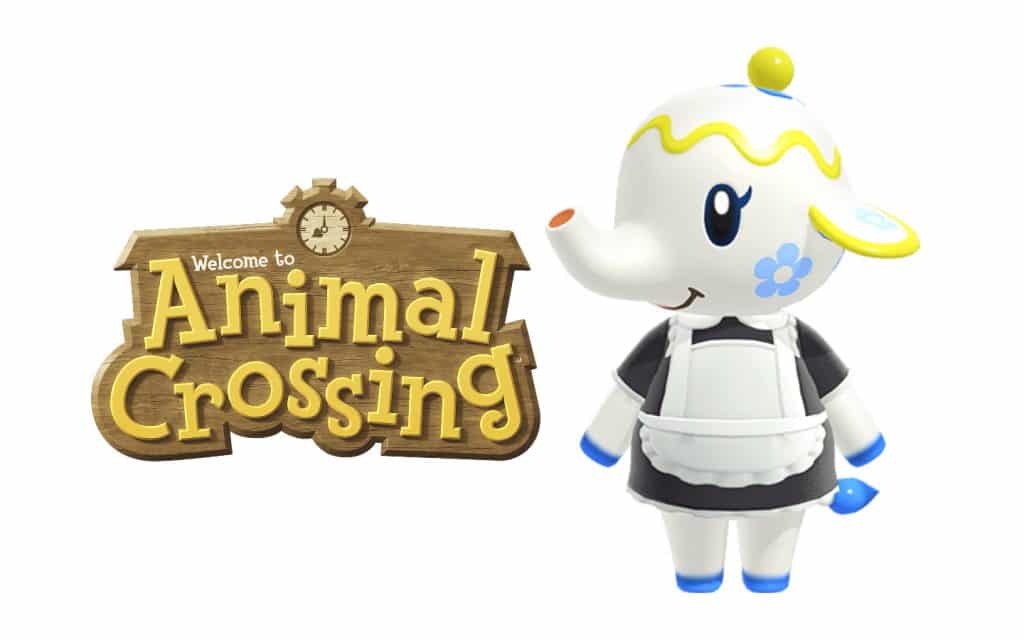 She’s sweet like sweet tea, with a warm kindness like vanilla chai. Tia is a stand-out villager in Animal Crossing due to her very unique look and pleasant personality.

Let’s learn more about her in this Tia villager guide.

Tia is an elephant villager with a Normal personality. She made her debut in Animal Crossing: New Leaf and has been a regular cast member in other games of the series, most recently in New Horizons.

Her name is as unique as her! The first syllable of Tia sounds like tea, which completes her teapot look. In the original Japanese release, she is named Tina, which still has the tea pronunciation in it.

There is no reason given as to why they changed her name in the English release, but the tea theme continues!

The first thing you’ll immediately notice upon first look is how much she looks like a teapot. Tia is all white with hints of yellow and blue. Her hooves, the tip of her tail, and the flowers all over her face and head are in shades of blue.

Meanwhile, the finial and trimmings of her teapot cover are in yellow. Compared to her New Leaf appearance, she is noticeably more porcelain-like in New Horizons.

Her round eyes are accentuated with cute and curled eyelashes. The end of her nose or trunk is noticeably smaller than other elephants, probably to make it look more like a teapot spout.

In New Horizons, she wears a Black Maid Dress, which gives a cafe vibe. This is very different from her New Leaf outfit which was a Garden Tank.

On rainy days, you’ll see her with her cute Blue Shiny-Bows Parasol.

True to her theme, when she’s relaxing with a drink, she holds a tea can or yellow mug. You’ll also see her eat a Chocolate Donut. Seems like every day is tea time with Tia!

Her catchphrase won’t come as a surprise to you. Yes, it’s “teacup” and it is definitely in line with her tea theme.

If this cute catchphrase is too on the nose for you, increase your friendship with her to get the opportunity to change her catchphrase.

They are called as such because of their neutral disposition towards the player and to most villagers.

Normal villagers are always kind and gentle, and you can immediately tell with Tia! Like other Normal villagers, she has a soft voice and speaks to the player in a sweet and calming manner.

Try talking to her after being hurt by wasps—-she will definitely express her concern to you!

Normal villagers are early risers, so you can probably see Tia roam around your island as early as 6:00 AM!

It’s generally a good idea to talk to her as often as you can every day. She also enjoys letters!

Other personalities can get along well with Tia due to her Normal personality, but she might have some conflict with Big Sister and Cranky villagers.

But don’t worry, there won’t be any boiling teapot happening, since a conversation with her and the involved parties can smoothen it out.

Her house got a cozier upgrade in Animal Crossing. From the outside, her house has light beige roof tiles, mint walls, and a navy blue door. Inside, a welcoming atmosphere greets you.

There’s a yellow Double Sofa to go with the Ironwood Low Table, a white Iron Garden Chair and Table for lounging, a Lily Record Player that plays K.K. Bossa, and a cute kitchen with an Ironwood Kitchenette, Gas Range, and Yellow Kitchen Mat.

Of course, her home embodies her tea theme as well. You’ll find a Tea Set and Simple Kettle in the kitchen and living room areas. For additional cafe vibes, she uses a Cafe Curtain Wall and a Menu Chalkboard.

In a lot of Animal Crossing communities, blogs, and gaming sites, Tia is often categorized as fairly popular. Her unique teapot look greatly helps, as well as her overall tea theme and sweet disposition.

In some elephant villager rankings, she also tops a lot of lists, together with another tea-themed elephant Chai!

How to get Tia in Animal Crossing?

You can try your luck with Mystery Island tours. There are a total of 12 elephant villagers in New Horizons, but a whopping 63 Normal villagers, so you best hope you run into Tia immediately without using a lot of Nook Miles Tickets.

You can also hope she’ll drop by through your Campsite, but this also involves luck and a lot of waiting. If you really want to invite Tia to your island, the easiest way is to get her Amiibo card.

What to Gift Tia in Animal Crossing?

She loves Cute and Elegant clothing, so it’s best to get her something like a Peasant Blouse, Mage’s Dress, or an Evening Bag.

Her favorite colors are black and white, like her Maid Dress. Her birthday is on November 18th—-don’t forget to drop by and give her a gift!

Tia in the DLC

Consistent with her tea theme, her vacation home request is a Perfect Tea-Party Palace.

She wants to invite everyone to a tea party and wants you to use tea-related items like Fancy Tea Set and Afternoon-Tea Set.

And that’s it for this lovable, tea-loving elephant! Tia is one of the most unique villagers in Animal Crossing, and I hope you get to meet her in the game soon.