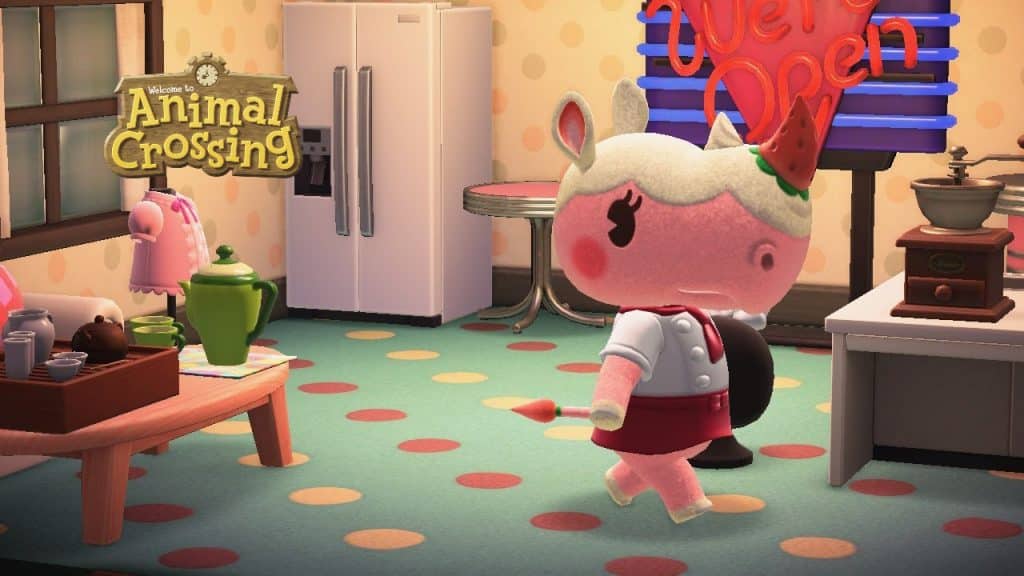 Be careful not to get a sugar overload with our featured villager today. She has a Normal personality with a strawberry dessert character design, so she is doubly sweet!

Get to know this lovely rhinoceros as we serve you her Merengue Villager Guide on a platter. Bon appetit!

Who is Merengue in Animal Crossing?

Merengue is a pink rhinoceros villager with a Normal personality. She joined the Animal Crossing series during New Leaf, and was then added to Happy Home Designer, Amiibo Festival, Pocket Camp, and in the latest game in the series, New Horizons.

Her birthday is on March 19th, with Pisces as her star sign.

Both her English and Japanese names revolve around desserts. Her English localized name, Merengue, comes from the dessert meringue, which is made using whipped egg whites and sugar.

In the original Japanese games, she is called Patty, and it is short for patisserie, a bakery for sweets and pastries.

Merengue’s overall character design will remind you of a slice of strawberry shortcake. She is a pink rhinoceros with white hair that looks like cream on her head. Her hooves are also white.

Her big horn is red with dots on it and green semi-circles or curves on the base, resembling a strawberry. She also has a tiny horn that looks like a dollop of whipped cream. Her cheeks have a reddish pink blush.

Continuing her dessert theme, Merengue says “shortcake” as her English catchphrase. This is definitely based on how her character design resembles a slice of strawberry shortcake.

In Japanese, she actually says “deshuga” and is a pun on “desu ga” and the pronunciation of sugar. Quite clever and sweet!

Expect Normal villagers like Merengue to be really pleasant to talk to. Their sweet nature is a given and they will shower the player with affection and kind words.

They won’t hesitate to befriend you immediately. Merengue can even offer twice the sweetness because of her dessert theme!

This sweet personality extends to her neighbors and friends as well. Merengue can get along with other personalities and will try to be understanding of their varying quirks and attitudes.

Lazy villagers will want to play with them but might get upset when they lose. Merengue’s caring nature will swoop right in!

Smug villagers can be quite the show-off with their knowledge of high culture and how to do things, but luckily Merengue is understanding enough to her Smug neighbors.

Misunderstandings and arguments can happen between Merengue and other personalities, but things usually get patched up immediately, especially when you’re around to settle matters.

Merengue interacting with other Normal villagers is always a delight! They all love baking and reading, so they can get along very well with each other.

You can even join them on their picnic or book club activities! Just for the sweet interactions and cute friendship alone, having another Normal villager with Merengue is definitely recommended.

Her house exterior’s color theme is just like hers. She has a Red Slate Roof, just like her strawberry horn, Beige Cobblestones as walls, and a Beige Basic Door.

Her interior design is as sweet as her! Baking seems to be Merengue’s favorite hobby, as seen in her furniture.

She has a Diner Counter with a Stand Mixer, a Microwave and a Refrigerator, a Kitchen Island with a Menu Chalkboard next to it, a Tea Set with Cream and Sugar, and a Soft Serve Lamp.

The colors of her walls and floors are in pastel shades as well. She uses a Pasted Dotted Wall for her wallpaper and Mint Dot Flooring to cover her floors. Sweet house!

Merengue has one of the most unique character designs in the Animal Crossing series. Players who want to have food-themed villagers usually have Merengue on their islands.

As of this writing, she is still in the Tier 1 group in Animal Crossing Portal’s recent rankings.

How To Get Merengue In Animal Crossing

When the game rolls species first and picks rhino, there’s a 50% chance you’ll meet Merengue this way, since there are only two Normals among the seven rhinos in the game.

The second method is waiting for her to appear in your Campsite. It seems like you can only get limited visitors a month, so a lot of waiting, patience, and luck is involved in this method.

The third method involves player interaction and sometimes trading. You go to another player’s island to invite their leaving or “in boxes” Merengue.

However, if you have her Amiibo card, scanning it is probably the easiest method to get her.

What To Gift Merengue?

Merengue loves Cute and Simple styles, so some clothing suggestions for her are Diner Uniform, Sailor Collar Dress, or a Cosmos Crown. For items, keep in mind that she loves the colors white and red.

Merengue in the DLC

Is Merengue a good villager?

Yes! She’s a strawberry shortcake rhino! She’s pink, cute, and has a Normal personality, which is a ridiculously cute combo in Animal Crossing.

Is Merengue a rare villager?

Using the Mystery Island method, when the game rolls for the mystery villager and picks rhino and Normal, there is a 50% chance it will pick Merengue.