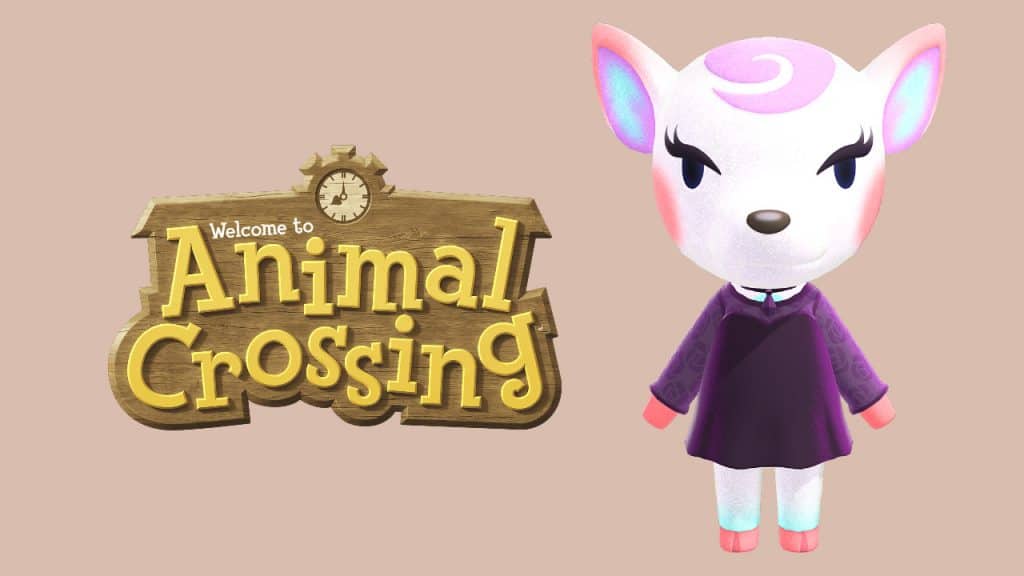 She’s stylish, she’s vogue, and she definitely knows she has it! This Snooty deer might seem beautifully intimidating at first, but at her core is a villager who loves to help her friends and neighbors in her own Diana way. Roll out the red carpet for her in this Diana Animal Crossing Villager Guide!

Who is Diana in Animal Crossing?

Diana is one of the deer villagers in the game and the only one with a Snooty personality among them. She was added in New Leaf and has shown up in subsequent games, like Pocket Camp and New Horizons.

While her original Japanese name is Natalie, her English localized name is Diana and could be derived from the Roman goddess of animals and wild hunts.

In Roman art, Diana is depicted as a huntress with a deer companion, and in one story she turned someone into a stag when she was spotted bathing.

Diana is a white deer with a lilac spiral tuft of hair and sparkly colorful ears. She has pronounced eyelashes and noticeable soft round blushes on her cheeks.

The tips of her ears also have the same soft blush as her cheeks.

Her hooves are pink with a brush of sparkly sky blue above them. She wears a purple Mysterious Dress for her default outfit and can be seen with a Black Chic Umbrella when it’s raining.

Since she has an Education hobby, she will wear Rimmed Glasses whenever she’s reading a novel.

Diana is fond of saying “no doy” in conversations. This seems to be her preferred version of “well duh” as a way of saying that something is quite obvious.

Of course, you should know that already, darling!

In Japanese, she says “desho” with a meaning that could range from “I think so / I wonder / Don’t you agree? / I thought you’d say that!”

While Snooty villagers like Diana tend to be a bit haughty, she still shows her genuine care to the player and her neighbors by offering help where help is needed.

She can be a bit straightforward, won’t mince words, and can be a bit blunt with her advice, but it is advice from her heart. She delivers her words with grace!

Diana enjoys the finer things in life, and because of this, she can bond with Smug villagers over high art and culture.

However, Smug villagers can be too much, and Diana won’t hesitate to tell them what she thinks. Here’s Henry being caught in the crossfire of Diana’s choice of words.

She still loves aiding her neighbors with their everyday problems, like when Normal villagers ask her to be more like her, when Peppy neighbors talk to her about music, or when Lazy friends lose their words.

Overall, Diana loves her friends and neighbors dearly. Whether it’s a Normal villager who needs a helpful push with being more assertive or a Jock villager wanting a nail paint sesh, Diana’s there!

Her exterior house has a color theme similar to her. The roof, which is a Light Gray Thatch Roof, and the walls, which are White Cobblestones, mimic her being a white deer.

The curtains are pink and look just like her ears, blushed cheeks, and hooves.

Inside, you get the impression that Diana likes to relax and have a spa day whenever she can. At the center is a Whirlpool Bath, with a Shower Set above and a Beach Towel to the side.

She also has some of the Rattan Furniture Set, like the Rattan Vanity, Rattan Low Table, and Rattan End Table. Her bed is a luxurious Shell Bed!

To aid with her relaxation, she also has Fragrance Sticks, a Fireplace to warm the place up, and a Lily Record Player that serenades her with the K.K. song Farewell.

Her refined and elegant manner partnered with her pastel colors make her one of the more popular villagers in Animal Crossing.

A lot of people in the community really love deer villagers, and Diana is definitely one of the top favorites.

In Animal Crossing Portal’s recent community poll, she went down one step but is still in the Very Popular category.

In Nookazon, her average price is one million bells and/or 30 Nook Miles Tickets. Whew, darling!

How To Get Diana in Animal Crossing?

If you really want to have Diana as one of your villagers, the easiest way to get her is to invite her from another player’s island or scan her Amiibo card.

If both methods are difficult for you, your next best bet is to go on multiple Mystery Island tours to meet her. There’s no immediate guarantee that you’ll see her, so it’s best to prepare enough Nook Miles Tickets.

Another way is the Campsite method, which takes a lot of time and patience. Campsite visitors don’t show up every day, so waiting is the game for this method.

What You Need to Get Diana in Animal Crossing

Diana adores Elegant and Gorgeous styles in purple and pink colors. Tumblr user rustic-moon has nicely gathered excellent ideas on what to give to Diana.

Her birthday is on January 4th, so these suggestions will come in handy then!

Diana definitely knows how to de-stress, as evidenced by her spa house, and she shows that side of her in the DLC as well.

She wants a vacation home where she can meditate, so use an Aroma Pot, a Fortune-Telling Set, and an Elegant Lamp to fulfill this request.

She is featured on the K.K. Waltz album dancing with Zell.

How do I get Diana to move to my island?

There are four methods to get Diana: Amiibo card, Campsite, meeting her in Mystery Islands, and inviting someone’s Diana who is leaving or inboxes.

What should I give Diana?

Give Diana clothes in Elegant and Gorgeous styles or items in her favorite colors. Check our “What To Get Diana” section above.

What is Diana’s favorite color ACNH?

Her favorite colors are purple and pink.