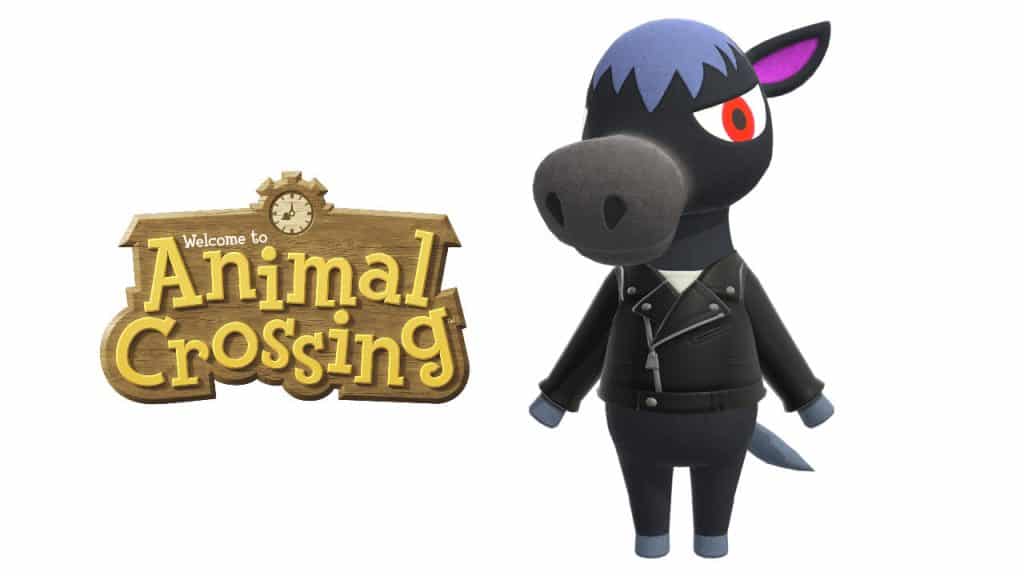 Don’t let his stare intimidate you. This “dark horse” might look fierce and angry, but he’s a champ and a real buddy at offering advice. Here’s Roscoe in his own Roscoe Animal Crossing Villager Guide!

Who is Roscoe in Animal Crossing?

Roscoe is a Cranky horse who joined the series way back in 2003 when Nintendo released the expanded version of the first Animal Crossing game.

Ever since Doubutsu no Mori e+, he has been in all of the subsequent games, spinoffs, and DLC.

His English localized name, Roscoe, might be a reference to American horse racing legend Roscoe Goose.

In the original Japanese release, he is actually called Schubert, a name with German origins.

Roscoe is a horse with a black coat and bluish-gray mane. His eyes are red and angry-looking, but don’t let that scare you! He just looks intense—-his Cranky self has a softer side, too. When he’s actually angry, the eyes turn yellow instead.

His hooves and tail are also bluish-gray, which works really well with his black coat. Aside from his red eyes, his magenta inner ears also stand out.

In New Horizons, he wears a black Biker Jacket and goes out with a Bat Umbrella when it’s drizzling.

His phone is also black and the bag he carries when he’s out shopping is gray. Roscoe embodies the “dark horse” persona with this wardrobe!

Can you guess what he says as a catchphrase? Nay! No, really. It would be foolish, nay, silly to continue horsing around!

Okay, let’s rein it in with the horse jokes and actually explain this catchphrase. If it’s not immediately obvious, nay sounds like neigh, which is perfect for a horse villager like Roscoe.

In Japanese, he says “bururu” in his conversations, which seems like the onomatopoeia of what a horse sounds like when they nicker.

Roscoe has a Cranky personality, so expect tiny squabbles between him and other villagers, particularly towards Peppy neighbors.

Cranky villagers can be difficult to sway from their old ways, thus you’ll often hear them act stubborn, unconvinced, and out-of-touch with new things.

But really, Roscoe just wants to guide and protect his neighbors, too!

As a Cranky, Roscoe can be quite opinionated about things, which can clash with the equally opinionated Peppy personality.

He’s just practical with things like food and will show his care to the player in his own Cranky way.

He gets along very well with other Cranky villagers and can have pleasant conversations with Normal and Lazy villagers.

He might seem a bit rude, but he does try to fix any misunderstandings between him and his neighbors, so all is well in the end.

If you want to say hi to Roscoe, he should still be wandering around your island very late at night, since he sleeps at 3:30 AM and wakes up at 9:00 AM.

Continuing his dark horse aesthetic, his house, both outside and inside, are mostly black. The exterior has Black Striped Roof, Gray Panel Siding, and a Black Vertical-Panes Door.

His house might have a sinister aura, but step inside and you’ll see that the interior is decorated and arranged in a classy way. The walls are covered in Black-Crown Wall and the floor has the Monochromatic Tile Flooring.

Right at the center is his Rattan Bed, with a Rattan Low Table at the back holding his Rattan Table Lamp and Portable Record Player.

Look up and you’ll see a Skull Doorplate right above his bed. His coat and hat are neatly hung on his Iron Hanger Stand, and guests can sit and get comfy on his Double Sofa.

Roscoe’s love for music shows, because aside from his record player he has a Throwback Skull Radio, an Electric Guitar, and an Amp. He seems to groove to K.K. D&B.

Keep in mind that all of these are in different shades of black!

His popularity is just so-so, but because of his dark horse aesthetic, some people like to have him on their island with Colton or Julian.

Chance to Get Roscoe in Animal Crossing

Your first two villagers are always a Big Sister and a Jock, so you can’t get Roscoe at the start.

However, you can always go to Mystery Islands to meet him and invite him back to your island.

With Mystery Islands, you have to hope that the game rolls horse first and then Cranky. Since Roscoe is the only Cranky horse, you will immediately meet him.

You can also try your Campsite! If you don’t have a Cranky on your island yet, a lot of Cranky villagers can drop by and visit you through the Campsite.

There are a total of 57 Cranky villagers though, so patience and luck are definitely needed.

The downside to both methods mentioned above are the long waiting time and testing your luck.

If you know someone with a Roscoe who is leaving, you can invite him instantly that way. Another quick way is to get his Amiibo card.

What You Need to Get Roscoe in Animal Crossing

Roscoe really likes Cool and Gorgeous outfits, especially in the colors black and gray. Looking at him, that’s not so surprising!

Roscoe is one rad horse, so maybe you can give him a Chesterfield Coat, Fedora, or a Bone Costume.

His birthday is on June 16th, so keep these suggestions in mind to score some friendship points from him!

Roscoe in the DLC

He wants a black and white vacation house. That’s it. Never change, Roscoe.

Use a Cool Low Table and a Cool Sofa on your design and Roscoe should give you a thumbs up.

What do you think of Roscoe? If your island needs a cool dark horse, Roscoe is your guy—-or horse. I hope you got to know more about him in this Roscoe villager guide!