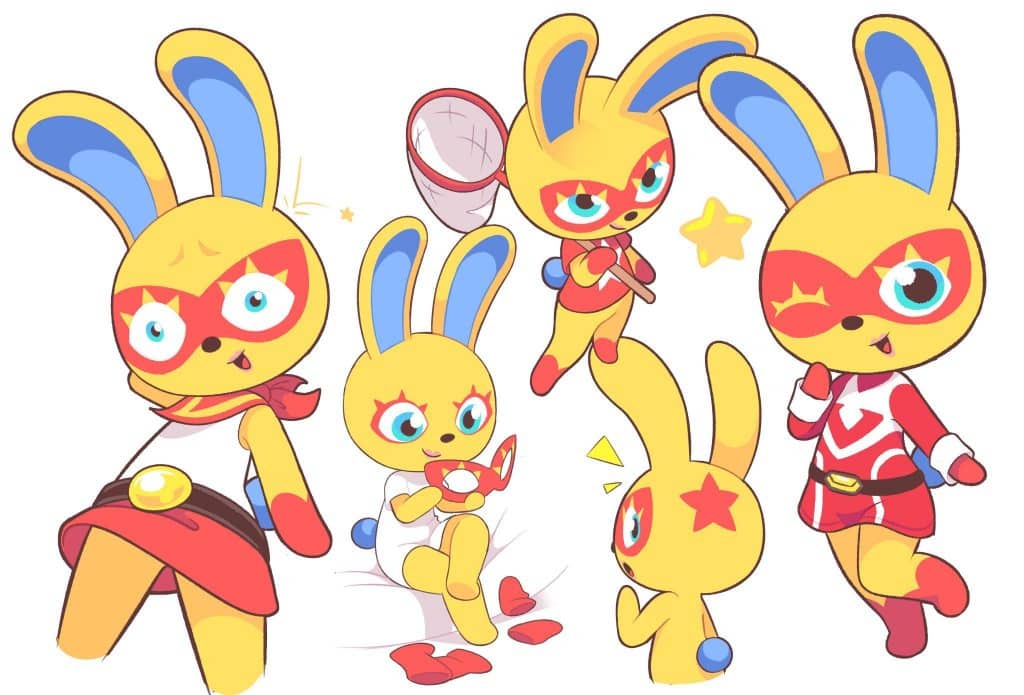 Patrolling your island by moonlight, being a Big Sister by daylight—-she is the one called Mira! This superhero bunny gets the spotlight today in this Mira Animal Crossing Villager Guide!

Who is Mira in Animal Crossing: New Horizons?

Mira is a yellow rabbit villager with a Big Sister personality. She joined the Big Sister lineup when New Leaf was released.

You can meet her in other Animal Crossing games, like Happy Home Designer, Amiibo Festival, Pocket Camp, and the newest addition to the series, New Horizons.

In the Japanese release, she is called Mirako, which could be derived from the name of the main protagonist in the manga Codename: Sailor V.

Their similarities don’t stop there, since Mira’s superhero outfit could be a reference to Sailor V’s costume as well.

In English, they shortened her Japanese name to just Mira. Other possible references or origins of her name could be the Japanese word for future, which is mirai, or a star in the Cetus constellation, which is also named Mira.

Mira has yellow rabbit fur with a superhero mask and outfit. Her eyes and her inner ears are different shades of bright blue, which stands out from her yellow fur and red outfit.

She also wears red gloves and red boots that match her superhero costume.

She has a black button nose, yellow eyelashes, and pink lipstick on her lips. Another very distinct feature she has is the red star on the back of her head.

Take a look when she turns around and you’ll see it!

Mira is a bunny afterall, so it’s not surprising that her catchphrase continues this theme. She says “cottontail” in her conversations, and it is as cute as her own fluffy cottontail!

In Japanese, she says “da mun” to end her phrases. Could it be that she’s saying “the moon”? This could be another moon rabbit reference—-just like another rabbit villager, Ruby!

Mira is a Big Sister villager. Big Sisters are known to be direct in their conversations, with a no-nonsense attitude and a very honest opinion on things.

Mira can be quite blunt when she says things, but don’t mistake it for rudeness, for she just cares for the players in a tough love kind of way.

Because of their seemingly hostile tone sometimes, Big Sisters can butt heads with other personalities.

With Mira, you’ll probably see her argue with Snooty and Smug villagers for their different communication styles, although Big Sisters can get fascinated by their lifestyles as well.

Meanwhile, Mira can get along with Jocks because they can both talk about physical activities.

Lazy villagers are too laidback, so Mira usually has no issues against them. Normal villagers are always pleasant to talk to, especially when it’s about cooking.

The exterior of her house matches her very well! The roof is a Yellow Wooden-Tile Roof, with Light-Brown Cobblestones as the wall, and a Red Vertical-Panes Door.

You won’t expect what’s inside, however. Maybe Mira is fond of the performing arts, has a fascination with dinosaurs, or just wants to act out her superhero dreams, but her house is basically one big stage play with triceratops as her fellow actors!

Her room is surrounded by a Heavy-Curtain Wall with Wooden-Knot Flooring as the base.

She has Tree Standees and Throwback Dino Screens as props, with her Cassette Player playing Go K.K. Rider as background music.

Guests can watch the show and sit on one of the Folding Chairs.

If you do get her as one of your two starter villagers, she will get a starter house instead, with Woodblock furniture.

Unfortunately, our superhero bunny isn’t really high in the rankings among Animal Crossing fans. There are far more popular bunnies, and the Big Sister group has a few more notable options.

Still, her superhero persona is quirky and unique, and a lot of players are grateful to have her on their island.

Chance To Get Mira in Animal Crossing

If you’re not so lucky with that and still want to get her, try redeeming a few Nook Miles Tickets and go on Mystery Trips.

Out of the 26 Big Sisters in Animal Crossing, she is the only rabbit.

Your Campsite could also get lucky and get her as a visitor! Still, this involves a lot of patience and waiting. The fastest method to get Mira is through her Animal Crossing Amiibo card.

What You Need to Get Mira

Mira is fond of Active and Cool styles in red and yellow colors.

Her hobby is fitness as well. Combine all that and the perfect gifts for her are Camo Tee, Pullover Jacket, or a red Biker Jacket.

Why not wrap a gift for her on her birthday on July 6th?

Mira in the DLC

Mira looks to the future in Happy Home Paradise. She wants her vacation home to have Crew Member’s Seats, a Strategic Meeting Table, and a Cold Sleep Pod. Her mirai name origin sounds pretty probable now.

She is featured in LINE’s 15th Anniversary Sticker Pack.

And that’s it for our superhero, futuristic, sports-loving rabbit! Meet her and her tough, big sis love in Animal Crossing: New Horizons!