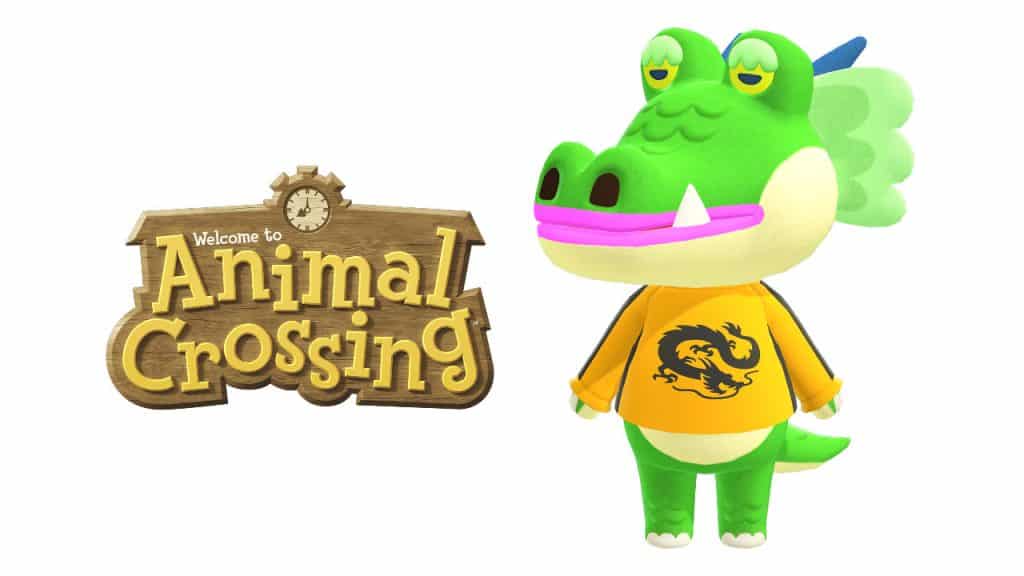 An actual dragon as a villager? Well, he’s really an alligator. But with his name and design, I don’t blame you if you think he’s a dragon!

Learn more about the character Drago in Animal Crossing in this special villager guide about him.

Who is Drago in Animal Crossing: New Horizons?

Drago is one of the alligator villagers in Animal Crossing. He has a Lazy personality with a laid-back attitude and was just added in New Leaf. He’s also in Happy Home Design, Amiibo Paradise, Pocket Camp, and most recently, in New Horizons.

Drago has a dragon theme going on for him—-from his name to his looks. His uniqueness not only comes from this but also from the fact that he’s a lazy dragon. That’s quite an interesting combo!

His English name is based on his dragon-like design. Since Drago seems to be a shortened form of a dragon, Draco in Latin means dragon. Likewise, he also has a similar themed name in Japanese.

In the original Japanese release, his name is Tatsuo, which means dragon.

Drago has one of the most unique designs in Animal Crossing. His looks definitely reflect his dragon theme. He is covered in green scales, has sharp teeth sticking out from his jaw, and has two frilled flaps on his head.

He also has horns sticking out of his head, and his underbelly. And the area under his jaws, and his arms are scaleless and cream-colored.

Apart from these notable characteristics, he has the same body shape as other alligator villagers—-they have large heads and jaws and show a bit of tooth.

Continuing his dragon theme, Drago wears a Dragon Suit with a dragon symbol on it. The yellow color makes it look like Bruce Lee’s iconic suit!

Drago says “burrrn” in English. Yes, that definitely burns with three r’s! Quite a fierce Lazy villager we have here.

This is definitely another dragon reference since most dragons in stories are usually bellowing fire.

In Japanese, he says “etto” (えーと), which is a filler word like “uh” or “uhm” in English. It’s amusing how ferocious his English catchphrase is, but his original Japanese one reflects his Lazy side.

Drago might look menacing and wild, but he has a gentle heart and a very easygoing attitude. Drago is a Lazy villager, and true to being Lazy he loves snacks and relaxing, and taking it easy.

Lazy personalities are generally nice to the player and to their neighbors. They can easily bond with other personalities because they don’t take things too seriously.

They are just happy to have snacks and to slowly enjoy island life at their own pace.

But because they can get too leisurely, they can clash with other personalities. Jock villagers don’t approve of their exercise-less activities, and Snooty villagers disdain their “I picked this snack from the floor” lifestyle.

Upon opening the door, you will be greeted by the redness of his Imperial Wall. In fact, his entire room is decorated with Imperial furniture.

His love for food is shown through his dining area setup. He has a lot to munch on thanks to his Imperial Table!

While not the most popular, Drago is often remembered because of his dragon theme, cool house, and interesting design and personality combo.

In different Animal Crossing communities, he is ranked so-so in popularity polls. Not too bad for our dragon friend, but I’m sure there are players out there who love and will love to have him!

Chance To Get Drago

You can get Drago through Mystery Island tours by waiting for him to show up at your Campsite, getting him from another player, or scanning his Amiibo card.

Recruiting villagers through Mystery Islands might need some luck (and a lot of tickets). The game picks randomly through a system of choosing species first and personality second.

There are eight alligators in New Horizons with two Lazy in the roster, so you best hope you get Drago and not Alfonso, the other Lazy alligator villager.

What You Need to Get Drago

Drago likes Elegant and Gorgeous clothes in orange and red colors. Some suggestions for this would be a shirt with a striped vest, silk shirt, or Miko attire.

Don’t forget to wrap your gift with wrapping paper, since this will give you an extra point to up your friendship meter with him.

His birthday is on February 12th, so these outfit suggestions are good ideas for his birthday present! It also sounds like he needs a new set of clothes.

Drago in the DLC

Drago wants all the good luck in his vacation lodgings. He thinks this can ward off all the bad vibes from him.

Use Lucky Gold Cat and Torii for your design and he’ll approve of it. Hopefully, adding a lot of lucky cats will help Drago with his luck problem!

As a joke, he has a Sea Horse Model in his home. In Japanese, seahorses are called Tatsu no otoshigo, which translates to “a dragon’s illegitimate child” due to how seahorses look like tiny dragons.

And that’s it for this gentle giant of a dragon. I hope you get to meet Drago in your game! With his Lazy personality and dragon aesthetic, he’s definitely one unique villager to have.