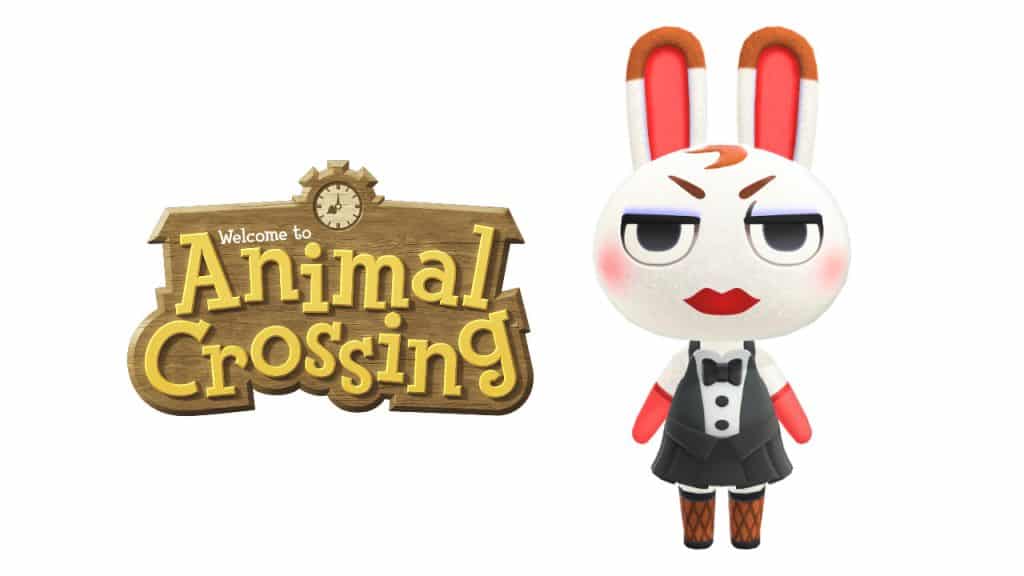 She’s classy, she has style—-she’s Tiffany, see her smile! This cute bun might look fierce, but behind the side-eyes and condescending comments about your current outfit, she is really a bunny who actually cares. Here’s Tiffany in her very own Tiffany Villager Guide!

Who is Tiffany in Animal Crossing?

Tiffany is a rabbit villager with a Snooty personality. She was added during Doubutsu no Mori e+, the expansion of the first Animal Crossing game. She has since appeared in all games after that, with her recent appearance in New Horizons.

In the Japanese release of the games, her name is actually Bazuree or Basley. The origin for this could be a reference to the Japanese word abazure or abazuremono, which is quite an offensive word to use on a woman.

It means a lady who is acting crazy, to put it mildly. The term is definitely used in a derogatory manner.

Back in the Edo period, it was an insult you can use on everyone, but nowadays it’s mostly used to slight women.

Is her name connected to how she looks? Your guess is as good as mine, and it seems like there’s a lot to unpack here about society in general if we keep digging.

It’s a good thing her English name seems to have a lighthearted origin. Her English localized name, Tiffany, seems to be a reference to Audrey Hepburn’s role in Breakfast at Tiffany’s.

It’s a good choice, localization-wise because Tiffany has the same fashion style as Hepburn’s character. She even has a tiny hair tuft!

Tiffany is a white rabbit with a snobbish look due to her hooded eyes and upward slanted eyebrows.

Her rabbit ears have brown tips. Her hands and feet could be colored as well, similar to other villager designs, but they’re covered in gloves and fishnet stockings, thus hidden from view.

She wears a black Chic Tuxedo Dress with her red gloves and black fishnet stockings. To continue her chic style, she has a Red Chic Umbrella that she uses for rainy days.

In previous games, she wore a Spiderweb Shirt and had an Elegant Umbrella. Seems like she upped her style in New Horizons!

Tiffany says “bunbun” as her English catchphrase. Seems like it’s rabbit-related, so it’s not too surprising, but it is quite cute and endearing!

In Japanese, she says “ttesa” to end her phrases and sentences. It’s a casual and informal way to say things. With Tiffany, no need to stress out about the formalities!

This little rabbit is a Snooty type! She might seem a bit haughty and condescending, but Snooty villagers love to help their neighbors with fashion and lifestyle advice.

You can definitely count on Tiffany to tell you what’s up!

She can get along with Normal villagers and will be eager to help them with their problems. Dealing with Smug villagers can go either way, however.

Tiffany enjoys her fellow high culture aficionados but can find Smug villagers to be a bit too much sometimes.

She’ll also get into small arguments with Lazy and Jock villagers. You’ll find Tiffany disapproving of the kind of food her Lazy neighbors enjoy, and rejecting the style and activities her Jock neighbors sport.

Overall, as a Snooty, Tiffany will be nice to the player and other characters in her own Snooty way. Try wearing the same clothes for days to get a uniquely Snooty compliment from Tiffany!

Her house might seem a bit foreboding and intimidating from the outside, with its Black Striped Roof, Black Stucco Exterior, and White Iron Grill Door.

It looks like a manor that you visit because of a mysterious invitation from a deceased millionaire!

Cast your fears aside, because inside Tiffany’s house is full of warmth and cheer. Tiffany’s pastime seems to involve unwinding in her house playing darts, billiards, and pinball!

She has a couple of Pinball Machines and Dartboards, a big Billiard Table at the center, a welcoming Neon Sign, and a Jukebox playing K.K. Ragtime.

Tiffany is not so popular among the majority of Animal Crossing fans. Is it perhaps her personality that rubs some people the wrong way? Maybe her design?

All I know is that the Tiffany fandom remains strong!

Chance To Get Tiffany in Animal Crossing

Want to have this bunbun join your island? Your two initial villagers will always be a Big Sister and a Jock, so there’s no chance you’ll get Tiffany right away.

Once you’re asked to invite more villagers to your island, you can definitely go through multiple Mystery Island trips to meet her.

Mystery Island’s “randomness” works by picking the villager’s species first and then personality.

If you get lucky and the game picks rabbit and Snooty, you’ll either get Tiffany or Francine, the only two Snooty villagers among the rabbits.

You can also meet her at the Campsite. You’ll most likely get visitors with personalities that you don’t have. No Snooty villager yet? Let’s hope Tiffany shows up!

What you Need to Get Tiffany in Animal Crossing

See her default outfit? Tiffany loves Gorgeous and Cool styles in black and red colors. Clothes like Visual-Punk Dress, Labelle Hat, and Full-Length Dress with Pearls might suit her.

Or give her Stache & Glasses. That works, too.

Her birthday is on January 9th, so these clothing suggestions might be a good birthday gift for her. Don’t forget to use wrapping paper for extra friendship points!

Tiffany in the DLC

The life of a celebrity can be tiring and Tiffany definitely knows this. For her vacation home, she wants to get away from it all and chill in her “Celeb Hideaway” paradise.

Use a Whirlpool Bath, an Elegant Sofa, and a Capricorn Ornament in your design to make her happy and satisfied. No paparazzis here, madam!

And that’s all for our Tiffany Animal Crossing villager guide! She’s a Snooty bunny with a flair for style. I can’t wait for you to meet her in the game!

Is Tiffany a snooty villager?

Is Tiffany a new villager?