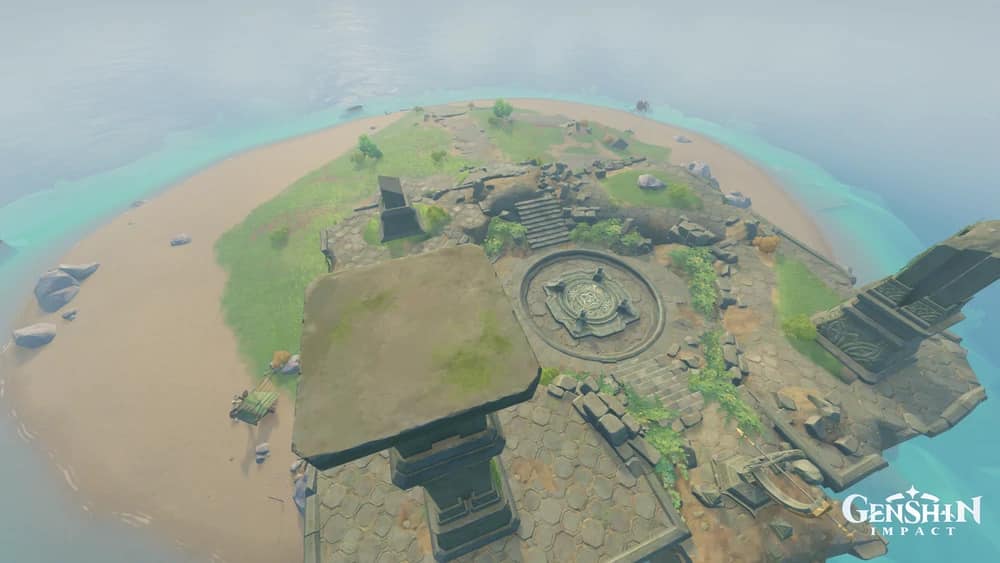 There are many hidden secrets in Teyvat that you wouldn’t even think to come across. Some award hidden chests and Primogems, or complete achievements, but some secrets award Quests in places not really on the map tbh.

Time and Wind in Genshin Impact is one such Quest that most players might never come across. So today, we’re going to show you exactly how to unlock the Quest, how to complete it, and give you some tips to make it easier.

Before you unlock the Quest though, you’ll need to do something first.

How to Unlock Time and Wind in Genshin Impact

The only way to unlock the Time and Wind Quest in Genshin Impact is to travel to the Nameless Island. If you’ve never heard of it, it’s a hidden island off the coast of Mondstadt to the East.

Here’s the exact location of the island –

The island isn’t marked so try and get as close to the blue arrow character marker as possible.

You won’t be able to swim all the way there but you can make use of Cryo characters like Kaeya to freeze the water and walk there. Alternatively, you can try jumping off Starsnatch Cliff and glide there.

But this will also take a lot of stamina to do so, and you might need to eat stamina-restoring foods to ease the ride.

Once you reach the island, proceed South and find a breakable rock nestled within an abandoned campsite. Break the rock and find the Ragged Notebook and read it.

The Time and Wind Quest should now automatically unlock and you can proceed with figuring out the puzzle.

Before reaching the island, you need to have an Anemo character to complete the Quest. If you have no other Anemo characters, resonate the Traveler with Anemo before starting your journey.

Go To The Sundial

Once you’ve read the Ragged Notebook, proceed to the sundial in the center of the island. You’ll have to wait until 02:00 – 05:00 and then use Elemental Sight and follow the Anemo trail leading East on the island.

You’ll find a high-level Ruin Guard and a glowing orb that is the Cluster of Wind. Use Anemo on it to activate the next step in the Quest.

There are three Clusters of Wind scattered around the island. Here is the location of each of the Clusters you need to activate with Anemo –

After this step, you need to proceed to the center of the island where the circle is located.

Once you reach this part of the Quest, make sure to edit your team to your strong characters. We made the mistake of keeping our party with Amber and Kaeya who weren’t the best and found a tough time in battle.

After that, enter the circle and you’ll find an Eye of the Storm waiting. Start the fight and continue until you whittle down the Storm’s health. You won’t be able to finish it off as it will try to escape.

You’ll then be prompted to continue the Quest by chasing it down.

Pursue the Eye of the Storm

When the Eye of the Storm flees from the Nameless Island, follow it by going into the circle and gliding to the top. Once you reach the top, just follow the wind currents which will bring you safely across to the Thousand Winds Temple.

Land as close to the waypoint as possible and you’ll be prompted to follow the next step of the Quest. There’s an optional dialogue you can speak to with Henry Morton who’s nearby the next sundial in Thousand Winds Temple.

He’ll explain a little bit about the backstory of this Quest by letting you know about his friend who was researching the secret of Mondstadt.

Find the Eye of the Storm

After waiting until 02:00 – 05:00, use Elemental Sight again and you’ll see clusters you need to activate with Anemo, similar to the ones found on the island.

But this time, activating the cluster will spawn Anemo Slimes that are high-level so clear them out after activating each cluster.

After clearing the clusters, use Elemental Sight and you’ll have to disperse the deposit of wind again to activate the final fight against the Eye of the Storm.

Go to the nearest Statue of the Seven and prepare. Alternatively, you can find places to cook to ensure you have enough supplies to revive and regen health as needed during the fight.

If you aren’t prepared, this will be a tough fight.

Defeat the Eye of the Storm and you’ll almost be done with the Quest.

After the fight, you can speak to Henry Morton again and he’ll take note of your findings and observations. He’ll then say he’s planning to travel to the island to see the other sundial for himself.

Do take note there are a few things you can find on the island so make sure to pick them up while you’re there. You can find a few chests, an Anemoculus, and achievements.

That said, we’ve reached the end of our Genshin Impact Time and Wind World Quest Guide and hopefully, you’ve learned something new.

It isn’t an obvious island or Quest to find. Take this as a reminder to go on the road less traveled to find all the secrets Teyvat holds.

But we wanna hear what you guys think, was this a cool Quest to play through?

Did you stumble on this without a guide?