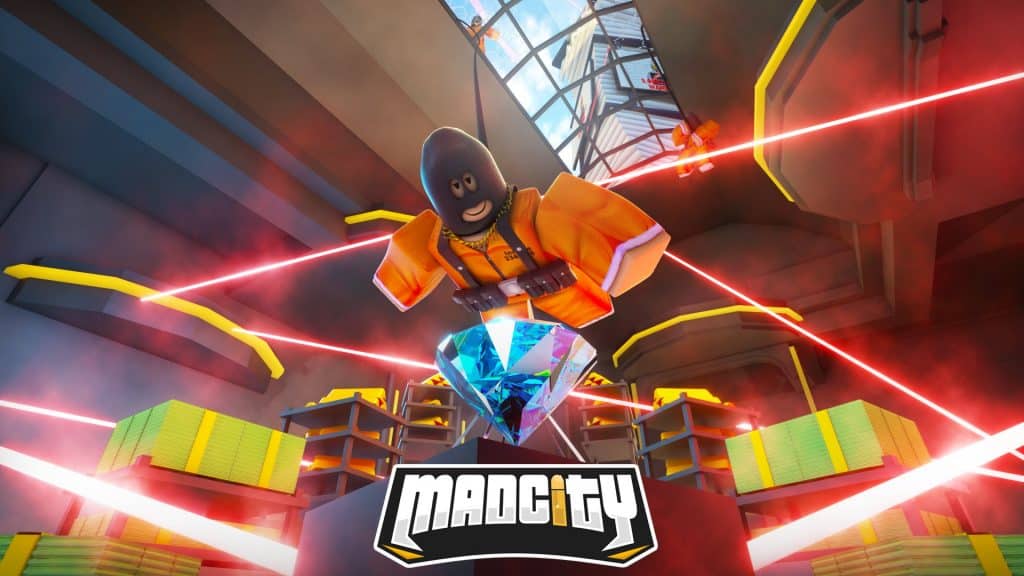 Mad City by Schiwfty Studios is one of the games in Roblox that caught my eye thanks to the overall concept. Think of games like GTA Online or DC: Universe Online and you’ll get the gist of it.

You can choose your own path on the side of justice, playing as a police officer or superhero. Or maybe take a walk down the darker path, and play as a bona fide criminal planning a heist or an evil supervillain plotting the destruction of all Roblox-kind.

Either way, there’s a lot to see and do in Madcity Roblox and today we’re going to be going over some tips and tricks to get better in Madcity, Madcity secrets, and some codes to get you some great free stuff in Madcity!

What is Mad City Roblox?

Like I mentioned earlier, Madcity is a game in Roblox where you can pick between good and evil. Very cliched, I know. But it’s still a pretty cool concept overall. Think of the game as a “Mad City Auto” if you will, where it’s a 3D sandbox, free-roaming genre.

But unlike GTA: Online, where you’re limited to being a criminal, here you can choose from either side of the law. Pepper in some superpowers and you’ve got yourself some mayhem all around the city.

And since it’s like GTA: Online, you can expect a lot of things to collect and use in-game. Some of these things could be new weapons and powers, land, air, and sea vehicles, and a bunch of customizations to make Madcity truly yours.

It’s essentially an endless loop of Cops & Robbers but that’s what makes it thrilling.

Breaking out of jail and running amok, robbing banks, getting weapons to fight off the chasing police and superheroes is a fun time no matter the platform, and Mad City certainly does it well.

And to help new players get some great stuff right at the start, you can use Mad City codes to easily get some unique loot.

What are Mad City Codes?

Mad City codes are provided by the developer, Schiwfty Studios, to get players some free in-game swag. Right now, most of the available codes for Mad City are skins for vehicles, weapons, and an emote or two.

There are a variety of ways to get these codes (keep coming back for updated lists right here) or follow the MadCity dev Taymastar on Twitter.

However, remember that these codes are available for a limited time, so redeem them ASAP to make sure you get all the collectibles. Miss out, and the codes and collectibles will be gone forever.

But, not to worry, check out the codes below and we’ll show you how to redeem them before it’s too late!

Redeeming the codes is a simple process. Here’s how to do it:

And that’s all you’re going to have to do to redeem Mad City codes. But just redeeming the codes isn’t enough to activate them.

Check out our tips and tricks below to find out how to apply the vehicle skins and some other tips & tricks you should know in Madcity.

There are a lot of different vehicle types in Madcity, from cars to boats, bikes, planes, helicopters, and more.

Now that you’ve finally unlocked some pretty cool-looking skins from the Mad City codes, you’re going to need to apply them before you can see the skins.

To do so is pretty simple:

There are plenty of vehicles to choose from. To unlock the good ones, though, you’re going to need to play through the game and complete missions or save some money.

Save up some cash and you can find vehicles on sale for over $25,000, like a dirt bike or Mustang.

How To Fly In Mad City

To fly in Madcity, you’re going to need to choose from either the Heroes or Prisoner class. The easiest way to get superpowers is to choose the Heroes class.

There’s a variety of Heroes based on unique powers like fire, ice, electric elementals, to even an archer and Iron Man class (Titan). Currently, there are only two superheroes that can fly, Inferno and Titan.

To activate flight for the Heroes class, this is what you need to do:

But for Prisoners and Supervillains, there’s another process. There’s only one villain with the power of flight, and that’s Phantom.

We’ll explain how to become a Villain, and how to activate your villainous powers down below.

How To Become A Villain In Mad City

Becoming a supervillain in Madcity is a slightly more complicated process than becoming a superhero. The Villain class isn’t available through a menu like Prisoner, Police, or Heroes, rather, it has to be earned.

Even though it is a slightly longer process, it’s still pretty simple to become a Villain:

Now, with the powers you collect from a Hero’s power crystal after defeating them, you’re technically a Supervillain.

But there are 3 other powers specific to the Villain class. Here’s how to unlock them:

Only Phantom can fly in the Villains class, in case you were wondering. But Raven and Rykou have some pretty cool powers too. Who wouldn’t want to be a sneaky ninja dude fighting cops?

How To Get Free Money In Mad City

Unfortunately, there is no legit way to get free money in MadCity.

There used to be a code (100K) that granted players money instantly, but that code is now inactive. But don’t fret just yet.

There are still plenty of ways to make money in Mad City. Here are some class-specific ways to make some cash money, courtesy Wiki:

Criminal and Villains can complete heists to earn cash:

That’s pretty much everything you need to know as you start your career (on either side of the law) in Roblox Mad City. Mad City codes are a great way to get some free swag right at the start of your game. But these codes will only do so much.

And it really feels like a mashup of GTA: Online and The Avengers.

Man, just a few years ago, a game like this, for free, would be unimaginable. But thanks to Roblox and its dedicated developers, kids and adults can enjoy fun, unique experiences without spending a single penny.

Unless you’re getting some Robux, that is.