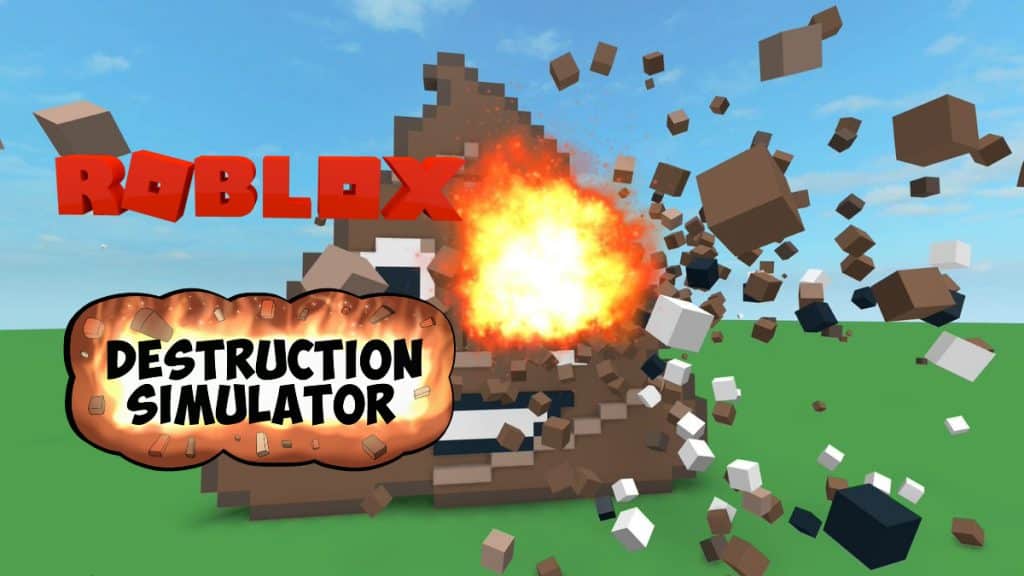 If you were in the mood to just utterly annihilate stuff in Roblox, then boy, do I got the game for you. Roblox Destruction Simulator is a game mode that focuses on causing the most destruction & mayhem possible.

And yeah, that’s pretty much it really.

The game was released back in 2018 and has since had over 400 million visits. The developer, silky_dev is still updating the game and the latest update has even more stuff in it.

Some of this includes new levels to play, higher ranks, 3 new weapons, a magic carpet to fly around the map, and more!

If there’s any time to start playing Destruction Simulator, now is perfect since it’s got all the latest updates.

But I’m getting ahead of myself, for players who don’t know what the game is all about, here’s a quick rundown for you.

What is Destruction Simulator?

Destruction Simulator is a physics-based simulator game in Roblox where all you have to do is blow stuff up.

As soon as you log in to the game, you’re equipped with a basic rocket launcher pistol (weird, I know) and a grenade. The premise of the game is to go into various levels and wreak as much havoc as possible.

The great thing about Destruction Simulator (and games like it) is the in-game physics. When you blow something up, there’s a glorious explosion of blocks all around.

If you destroy something right, you could topple it over fully and it’s just so satisfying to watch it unfold. Unlike physics in Minecraft when you destroy a tree or bomb a mine, there won’t be any bricks floating in the air.

That makes for a better, more realistic simulation that I appreciate.

As you destroy more and more structures, you’ll be rewarded with Bricks. When your bag is full of bricks, you can head back to the main area to sell these bricks for Coins.

With these coins, you can unlock bigger bags to store more bricks as well as buy new weapons of mass destruction.

Players can unlock a variety of weapons like rocket launchers, flamethrowers, a bee shooter, and a chicken cannon. You read that right. More expensive weapons will be available as you level up, unlock new bags and weapons.

New weapons will have bigger explosions and faster reload times.

There’s plenty of stuff to unlock as you play, so don’t worry about that. Though it can feel like a grind at higher levels.

There’s quite a variety of different scenes and stuff to blow up in the game. Some of them are pretty standard like a castle, skyscrapers, or a shipping yard.

But there have been new levels added to the game where you can blow up stuff like a volcano, the pyramids, and a rocket waiting to launch to space.

If that’s too tame for you, don’t worry. You can even blow up emojis, huge Roblox characters, and even a Nintendo Switch!

While these aren’t the most intricately designed levels, they’re still plenty of fun to destroy.

If you’re familiar with playing simulator games in Roblox like Destruction Simulator, you know that it can be quite the grind.

That’s where Destruction Sim codes come in handy. Codes in Roblox are essential boosts provided to players by the developer. Most codes in Destruction Simulator will reward players with exp boosts, increased levels, coin boosts, and free coins.

We’ve scoured the internet for these codes, and most are from the Destruction Simulator codes Wiki. Take a look at the list and see what codes are available!

*There are currently no active codes for Destruction Simulator.*

If you play Destruction Simulator for 20 minutes, you’ll get 1x Lava Block.

How To Redeem Destruction Simulator Codes

It’s a simple process to redeem codes in the Destruction Simulator. Here’s what you need to do:

And that’s all you need to know about Destruction Simulator codes and the game’s mechanics to make it an easier experience. You’ll probably want to remember that it’ll take time to level up and get newer, better weapons.

But don’t let that stop you from all the fun you could have with the game. Just take it slow, level up, and enjoy the game with all its wacky physics!