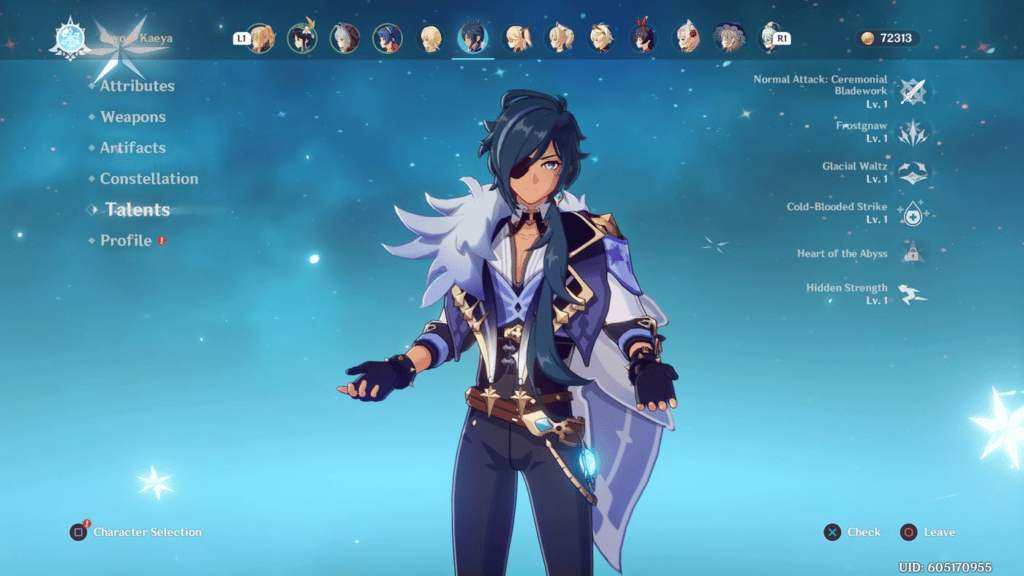 Who is Kaeya in Genshin Impact?

“Cavalry Captain Kaeya is quite approachable, at least when compared to his predecessor. He seems to know about everything happening in Mondstadt.”

— From Ellino, a sightless bard

From the eyepatch to the striking looks and the badass cryo abilities, Kaeya has got it all. A Cavalry Captain of the Knights of the Favonius, Kaeya is an insane DPS & Support archetype hero who also carries a lot of lore and personality.

Adopted by the Ragnvindr family, Kaeya Alberich is one of the heirs to a massive wine manufacturer and a native of Mondstadt.

The shady, outwardly-mysterious character often frequents Mondstadt’s many taverns instead of the Knight’s headquarters.

How to Unlock Kaeya in Genshin Impact

Kaeya is one of the free characters in the game and can be unlocked as you progress through Genshin’s story.

The third character that you get, Kaeya can be found via the quest Crash Course, which you will get from Amber in Mondstadt. After you complete the short tutorial on his mechanics by meeting him in the dungeon, he will be added to your party.

Kaeya’s primary ability has him use his blade to unleash a devastating attack, and can be used in one of three ways.

He can consecutively strike the enemy five times, charge his attack and deliver two rapid blows at the cost of Stamina, and plunge his sword from the air to the ground below, dealing direct as well as AoE damage to his enemies.

Kaeya’s Elemental Skill is the Frostgnaw, where he unleashes a wide-range blast that deals Cryo elemental damage to enemies around him.

Finally, his Elemental Burst is the Glacial Waltz, wherein he summons three sharp ice swords that revolve around him. As long as they are around him, they also deal elemental damage to enemies around him.

Every time Kaeya damages an enemy with Frostgnaw, he regenerates HP equivalent to 15% of the damage dealt.

Enemies that Kaeya freezes via Frostgnaw drop powerful Elemental Particles. But only 2 EPs can be generated with each attack.

Kaeya’s final passive ability decreases the Stamina Consumption of all party members when sprinting by 20%.

In this constellation, Kaeya deals an extra 15% damage to enemies affected by the Cold or Frozen status effects and also augments the CRIT rate by the same.

Kaeya’s Glacial Waltz increases the time that it is active by 2.5 seconds every time an enemy is defeated, up to 15 seconds.

This increases the level of Frostgnaw by 3, up to a maximum level of 15.

This triggers automatically when Kaeya’s health falls below 20%, creating a shield that absorbs 30% of damage scaled to Kaeya’s maximum health.

Additionally, this shield has the special ability to absorb Cryo damage with 250% efficiency once every 60s.

This increases the level of Glacial Waltz by 3, up to a maximum level of 15.

With this, Glacial Waltz generates an additional icicle, regenerating 15 energy when cast.

The best weapon to pair with Kaeya is the Mistsplitter Reforged, which gives you a 12/15/18/21/24% Elemental damage bonus for every element and the might of Mistsplitter’s Emblem.

When stacked, the Emblem provides an increase in benefits ranging from 8% all the way up to 56% for all Elemental damage bonus.

The best Artefact to pair with Kaeya is the Blizzard Strayer. At a level of 2, it gives you a Cryo damage bonus of 15%, and when a character attacks an enemy which has been damaged with Cryo energy it increases by 20%.

You also get an additional 20% Critical damage rate increase if the enemy is under the Frozen status effect.

There are several teams that Kaeya can contribute to in a DPS or Support role. Some of these teams are –

Kaeya is very strong as a Cryo Damager and Support for the team, and these are some of the best builds that you can run with him

The weapon to use for this build is the Freedom-Sworn.

The best weapon to pair with this build is the Aquila Favonia.

Artefacts that go best with this build are the Pale Flame and the Bloodstained Chivalry.

That’s all you need to know about Kaeya Genshin Impact and how you can use him. Have fun.

Additionally, here are some of our other character guides, if you feel Kaeya isn’t for you – Keqing, Il Dottore and Barbara!