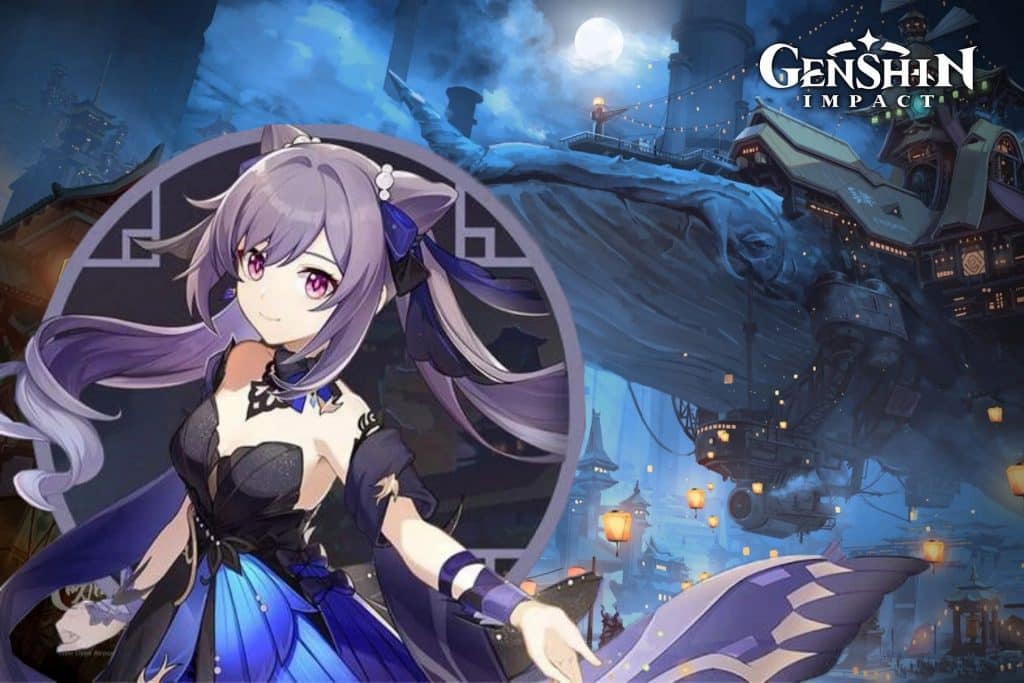 Keqing in Genshin Impact is a wonderful character to add to your team compositions. She’s a proficient damage dealer and has some great skills out of combat too. But she does have flaws that make her less viable in higher-level fights and content.

However, there are workarounds to it and that’s what we’re here to do today. We’ll go over everything there is to know about Keqing from her Talents and playstyle to the best Keqing build and some additional info you might find useful.

Keqing is a powerful character that focuses on dealing as much damage as possible when she’s on the field. Her only role is the Main DPS role because her damage and skills heavily rely on her being the active character.

In our Genshin Impact Tier List Keqing is ranked as a high B-Tier character who’s close to being in the A-Tier. The B-Tier means the character is viable, but there are a few limitations that hinder their potential.

Her Normal Attack unleashes a 5-hit combo with Keqing’s sword. The last attack in the combo is a swift dash forward and launches enemies in the AoE.

Holding her Charged Attack consumes a portion of her stamina and unleashes 2 swift slashes. This launches weaker enemies backward.

Keqing’s Elemental Skill, Stellar Restoration, throws out a Lighting Stiletto dealing AoE Electro Damage in a small radius. This also leaves a Stiletto Mark at the point of impact.

Holding her Elemental Skill lets you aim the Stiletto and choose the point of impact. It can be aimed upwards where the Stiletto Mark will remain for the duration.

Either activation will clear the Stiletto Mark so it’s a one-time use skill.

The great part about the skill is that Keqing can move past any objects in her way with the blink teleport. So if you aim the skill at a location that’s obstructed by a tree or gate, you can move past it if the Mark is placed on the other side.

This is an invaluable skill for Exploration, but more on that later.

Her Elemental Burst is a simple cast and forget move but is a powerful Electro Damage dealer. Keqing also has a Passive Talent, Aristocratic Dignity, which grants +15% Critical Rate & Energy Recharge.

It lasts for 8 seconds but in that time, you can deal substantial damage quickly with Keqing. The higher crit rate is another point of focus with Keqing’s build. She’s heavily reliant on crits and crit damage, so the build focuses on Electro Crit DPS.

Not only is she well equipped for combat, but Stellar Restoration also allows you to execute crazy-looking combos while being an excellent tool for exploration.

It’s a fun Talent to play with, but it’s also incredibly useful for reaching tight spaces and high-up places.

But she does have her flaws like high stamina drain for her Charged Attack and requires Constellation Lvl. 2 to truly flourish her Electro Damage potential. Your team comp would need to adjust greatly to support Keqing well, especially if you focus on Electro reactions.

This is also a big reason she’s in the B-Tier. She’s powerful and incredibly useful, but many other characters can fulfill the Main DPS role without Keqing’s intrinsic flaws.

To make up for some of her flaws, we can rely on the best Keqing build to make it a non-issue. Keqing is best suited to the Main DPS role. The main stats we’re increasing include ATK%, Electro Damage Bonus, and Crit Rate/Damage.

Increasing these stats is the best way to maximize Keqing’s damage potential.

Mistsplitter Reforged is one of the best weapons for this Keqing Genshin Impact Build. It optimizes Keqing’s damage output as a Main DPS thanks to the weapon’s effect and skill.

Depending on how many stacks you have active, you can get a substantial increase in Elemental Damage Output. Stack buffs are also relatively easy to attain thanks to her Elemental Skill and Burst.

Gradually as you upgrade the weapon’s Ascencion Lvl. This buff will also increase, making Keqing an absolute Electro powerhouse. The Bonus Effect is also pretty useful, increasing Crit Damage by +9.6% without the Artifact build.

Overall, Mistplitter Reforged is the optimal weapon for this build as it greatly increases Keqing’s Electro Damage output. Adding in the buffs from the Artifacts, you’ll see a sharp increase in overall damage dealt.

But if you’re missing the weapon, here are some great alternatives.

Your best option here is to rock dual 2-set bonuses from Thunder Fury and Gladiator’s Finale. This optimizes both your Attack and Electro Damage for a substantial buff of at least 15%.

Paired with the stellar increases from the Mistsplitter Reforged, Keqing should be quite the powerhouse by now. She’s also pretty flexible when dealing damage and can rely on her Normal & Charged attack for consistent DPS while waiting for cooldowns.

How To Get Keqing in Genshin Impact

Keqing is available from these Wish banners –

Also Read: How To Get Wishes in Genshin Impact Fast

How Old is Keqing in Genshin Impact

Keqing is believed to be 18-23 years old. There is no official mention of her age, but based on her interactions with other characters and lore, she seems to be a young adult.

Her birthday is on November 20th.

Keqing is a 5-star character and has some amazing damage potential. However, as we’ve mentioned earlier, some issues hamper her power.

But if you’re not the type to fully invest in the highest numbers and damage possible, there’s nothing wrong with Keqing. If you use only the “best” characters, you’re severely limiting your experience in the game.

Sure, she might not be the absolute best, but she’s up there in terms of playability, viability, and in-game performance. So if you’re the type to care less about the numbers, Keqing is an exceptional character to play in Genshin Impact.

And with that, we’ve reached the end of our article and hopefully, you’ve got a better understanding of Keqing in Genshin Impact. But we want to know what you guys think.

Is Keqing good enough for your teams? Or is she your favorite damage dealer?