Terraria vs Minecraft: Which One Is Better? The Ultimate Battle 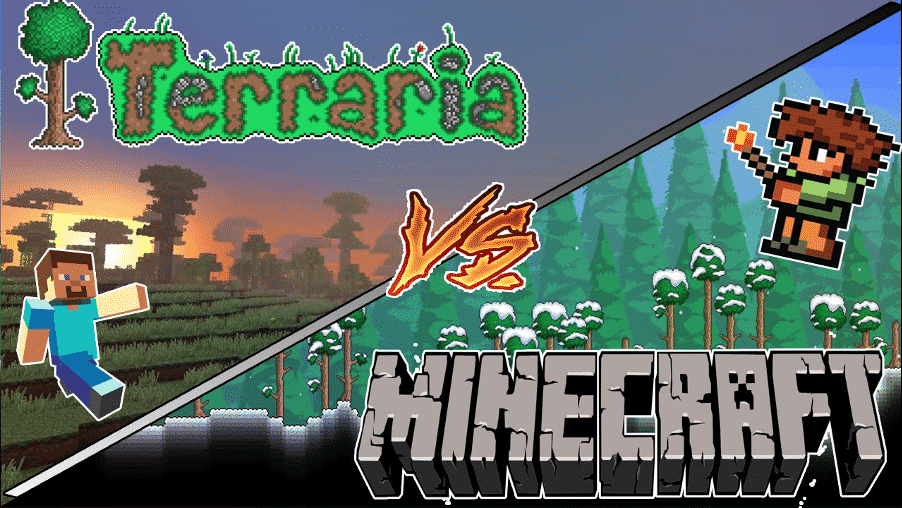 Honestly, Terraria vs Minecraft is a difficult debate to conclusively settle. Both games, despite being based on the sandbox genre, offer contrasting experiences. Every player has a different opinion when it comes down to choosing among these two.

Coming down to the gameplay of Terraria and Minecraft, the dimensional overview of both these games creates a striking difference.

Minecraft offers a truly 3-dimensional sandbox experience. It has an edge in terms of exploration and imaginative application. Minecraft operates with basic rules, allowing players to turn their wildest imaginations into reality.

It cannot certainly be called a game as there is no fixed purpose or end goal in Minecraft. An end goal would have given the players a motivation to work towards achieving something.

The expanse of creative freedom offered in Minecraft is unparalleled by any other sandbox – an open-world experience with the sole purpose of creating. Exploring isn’t necessary until players have completely mined every nearby object and possible locations.

Terraria is a sprite-based two-dimensional game which makes it very unique for someone playing 3D sandboxes. It’s much more structured as compared to Minecraft. With more elements over the freeform creativity of Minecraft, Terraria offers unique gameplay.

Terraria offers role-play gaming with a distinct set of goals. These goals make Terraria far more enjoyable in single-player as well as multiplayer. Exploration in Terraria is far more rewarding, you will find good resources with every level.

The real aspect comes during the underground darkness where you need fire to see through the darkness. You will need to collect resources to make a fire which makes further exploration easier.

Underground caverns are full of important resources such as the heart stone, it will increase your life bar. While this gameplay comes pre-built with Terraria, the same has to be user-created in Minecraft.

The deeper a player goes in Terraria, the tougher enemies they will encounter. It brings out a sense of accomplishment each time they defeat their enemy.

Both games offer a distinct degree of uniqueness and quite a difference in in-game progression. Minecraft can be considered as a sandbox with the incorporation of building and exploration.

On the other hand, Terraria feels like an adventurous, exploration game with a mix of sandbox elements.

To find a winner between Terraria and Minecraft, we need to compare different aspects of both these games. So, without creating more fuss about it, let’s delve into the finer details.

Terraria being a two-dimensional scroller keeps you bound to the world you are in. The smaller objects with an astonishing depth make Terraria a lot less complicated, despite the unique charm of its 16bits graphics. It feels lagging and primitive.

In reality, Terraria’s graphics bars it from competing with the sprawling 3D world of Minecraft.

Minecraft being a giant sandbox 3D game allows users to enjoy the Minecraft world from an (FPP) first-person perspective. Objects in Minecraft are far more detailed when compared with Terraria. The striking difference in watching the game unfold in a plane 2D vs an exploring 3D is a major difference in these two games.

There are a lot of actionable events in Terraria, it allows you to dig and fight tough bosses one after the other. On the creative front, players can craft numerous weapons, over 20 sets of armour and even farm for different weapon drops.

In terms of exploration, Terraria offers players with dungeons, oceans, and many different biomes. There is so much to do in Terraria. Add to it the constant stream of updates and packs. Terraria’s developers keep updating the gameplay with new features and objects.

Minecraft, on the other hand, offers a limited number of bosses and enemies. When compared with Terraria, it feels lacking in terms of content. Maybe, if Microsoft would have kept on adding more downloadable content to the game. It would have definitely resulted in making Minecraft on par with Terraria in terms of content. There are limitations to what you can do in Minecraft with respect to the content and gameplay.

Summing up, the content in Terraria would fulfill the requirements of a lot of people as compared to Minecraft. And this perhaps is where the Terraria vs Minecraft comprehensively shifts towards the former.

Terraria offers better rewards when compared with Minecraft. Players can unlock a new tier of objects after defeating each boss. The bosses also drop useful items such as a Treasure Bag after being defeated. These bags contain different ores such as Crimtane or Demonite ores.

Killing bosses in Minecraft just rewards the players with XP, they don’t unlock new objects. Even after completing and passing through some of the most treacherous paths in Minecraft, players are rewarded with the same loot they can find at easier places.

Same goes with the latest haunted house where you get a few chests of casual dungeon loot (bones and wheat.) Such casual loots make fighting stronger mob bosses unworthy in Minecraft.

The developers of Terraria constantly provide players with teasers with new features and cool objects. These updates give players something to look forward to. Frequent updates make it obvious that developers are trying hard to make the gameplay far better than it is.

Terraria recently got the Journey’s end update on its 9th Anniversary (16th May 2020). It clearly stands out when compared to updates in Minecraft. Over the last 5 years, Minecraft hasn’t provided any major updates except adding a few animals and new blocks.

Minecraft clearly lacks in terms of real content. The last Java update only added a few biomes, new mobs, and small upgrades in processes of different events. i.e, TNT now explodes when hit with any burning projectile, and villagers can craft iron golems irrespective of their profession!

Be it Minecraft or Terraria, both offer some unique features and a Minecraft vs Terraria primarily does come down to player preferences. Terraria is an adventure game with sandbox features while Minecraft is a sandbox with exploration and building.

Some players don’t want to get stuck in the cycle of fighting bosses. To them, Minecraft is a preferred choice as it allows exploration gaming without having to worry about completing achievements. Simplicity and freedom are the reason Minecraft attracts a high number of new players.

Those who like to play a game having distinct goals which prompts them to perform better, try different levels of difficulty. Terraria offers multiple mob bosses to defeat and provides a focused progression.

Bottom line, Terraria vs Minecraft is all about whether you one over the other and why!

Is Terraria a Minecraft ripoff?

No. There are a lot of similarities between Minecraft and Terraria – both games depend on the open gaming concept, i.e. Sandbox. But the gameplay is completely different.

The major difference between the two games is that while Terraria is a 2D game it is far different from Minecraft, which is 3D. Different tiers of weapons, armour and tools also seem like a common feature in these games. But Terraria, having a distinct end goal, makes it smaller.

Say after 100 hours, you will complete the entire Terraria. While on the other hand, Minecraft has no distinct goals, allowing users to play for unlimited hours.

Why is Minecraft more popular than Terraria?

Minecraft is not just more popular than Terraria. It is in fact the second most selling videogame of all time. Minecraft has sold over 200 million copies since 2009 and official Beta release in 2011. Minecraft being more explorative and building-oriented game appeals to players of all age groups.

It allows you to invite an unlimited number of players to your world and play together. A player could possibly generate income by creating unique worlds and charging for in-game purchases. These facts have made Minecraft far more popular than Terraria.

What came first, Minecraft or Terraria?

Minecraft was created by Markus Persson or ‘Notch.’ He released an alpha version, the CAVE GAME in 2009, 2 years before Terraria. Its surging popularity prompted Notch to work full time on the Beta version. He founded Mojang Studios to launch a full version of the game, Minecraft for PC in November 2011 till Microsoft acquired Minecraft in 2014 for $2.5 billion.

Terraria, on the other hand, was initially released for Microsoft Windows on May 16, 2011. It is currently available for PC, Consoles and Mobile platforms. So, the question of what came first is still up for debate. If we agree to compare the launch of the beta version of these games, Terraria was launched in May 2011, 6 months before the launch of Minecraft’s beta version in November of 2011.