30 Amazing Minecraft Facts You May Not Know in 2022 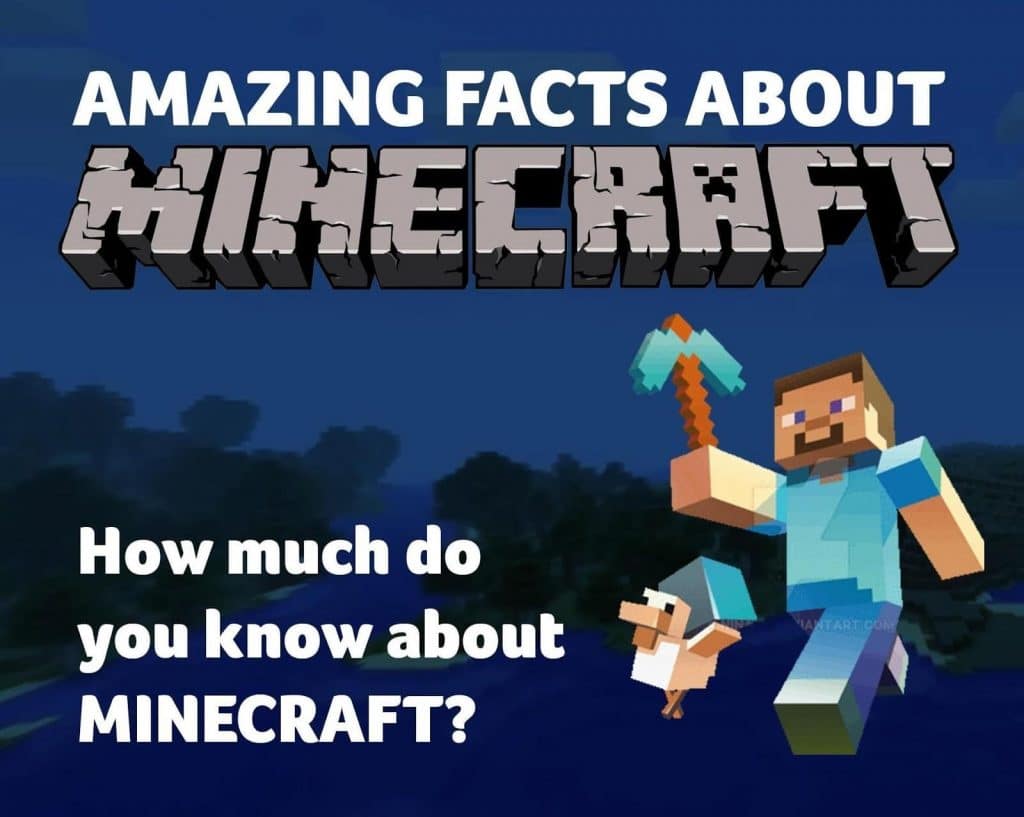 Anyone yet to play Minecraft beyond just Minecraft Classic on a web browser has missed out on why some consider this the ultimate sandbox game. Minecraft is a whole dimension of parallel existence with more to do in it as time passes.

If you love Minecraft, you will agree with it and you will love these 30 Minecraft facts. We’re pretty sure you wouldn’t score a full 30 if this were a trivia questionnaire.

What's Inside? show
Amazing Minecraft Facts You Didn’t Know
1. When loading Minecraft, the yellow text that appears is called splash text
2. Gold has a higher enchantment value
3. Occasionally, Minecraft would get its own name wrong
4. Curing a zombie villager in Minecraft is possible
5. When a witch is drinking a potion, its nose will point straight
6. Players can hide from hostiles by hiding
7. The Cauldron can fill from rain
8. Hostile mobs do not spawn in mushroom biomes
9. Stuff attached to you in creative mode flies with you
10. You can see the view of any mob in spectator mode
11. Blast resistance levels of the Command block are higher than Obsidian
12. April fool prank using locked chests
13. Edelman cannot teleport in a hole two blocks deep
14. You can get rid of all the chats by just one combination
15. Eating a puffer fish can give you a nausea effect
16. Ender dragons can be killed using snowballs
17. When making a wither, heads should be placed at the end
18. The enchantment table interface is written in the standard galactic alphabet
19. Wood and wood combo can craft beds
20. Using keys to find hitboxes
21. Rain can kill snow golem
22. You can dye your dog’s collars
23. Creeper was originally designed to be a pig
24. Enderman Noises are backward-played words
25. Green Emeralds can only be found in Extreme Hills
26. There is an end to the Minecraft world
27. Minecraft boats can now hold two people
28. You can drive a saddled pig
29. You can fall 22 blocks without dying
30. Ghast cannot detect you through cobwebs
Conclusion

1. When loading Minecraft, the yellow text that appears is called splash text

These are insight jokes. During the first release, Minecraft had around 100 of such splash texts. But now they have about 350 of such jokes. Yeah! The jokes are written below the Minecraft logo.

2. Gold has a higher enchantment value

3. Occasionally, Minecraft would get its own name wrong

The chances of you noticing the same is about one in ten thousand. The introductory name is a misspelling of its title game, reversing the positions of E and C. It reads “Minceraft” in place of Minecraft.

4. Curing a zombie villager in Minecraft is possible

You first need to trap the villager zombie, so that he doesn’t escape or burn during the day. After that’s done, hit him with a splash potion of weakness.

You will also have to feed him a golden apple. After a few minutes, you will notice him changing back into a villager.

5. When a witch is drinking a potion, its nose will point straight

Somehow because of a design glitch of planned coding, the players witness a weird position while a witch is drinking a potion. It seems as if the witch is drinking the potion through her nose and the animation doesn’t show any mouth.

6. Players can hide from hostiles by hiding

An interesting way of losing an in-pursuit mob is by hiding in a two-block tall non-solid material. For example, the sugarcane field. If you go inside them, the mobs wouldn’t be able to pursue or harm you.

7. The Cauldron can fill from rain

If a cauldron is exposed to the open sky when it is raining. Rain has a good chance of partly filling those cauldrons.

8. Hostile mobs do not spawn in mushroom biomes

Mushroom biomes are a great place to build your house. Wondering why? It is because no hostile mobs can spawn here. The only thing that naturally spawns in a mushroom would be, you guessed it right, Mushrooms.

9. Stuff attached to you in creative mode flies with you

If you are in creative mode and happen to be flying around, while you have a horse on a leash. Your horse will start to fly with you. The same thing repeats when you are in a boat, and the horse is on the leash.

10. You can see the view of any mob in spectator mode

Once you are in a spectator mode also known as the game mode 3, you can see the movie view by left-clicking on the mob. A Minecraft facts about mobs that we bet you didn’t know about, did you?

The creepers have a green pixelated tinted vision, the Endermen have their colors inverted. The spider too has a unique double vision with a slight blurring and a high field of view, while the cave spider has the same view as a spider with a little red tint.

11. Blast resistance levels of the Command block are higher than Obsidian

Every chunk generated between April 1st and April 5th in 2011 ran the chance of containing a locked chest. Players receiving locked chests got a pop-up message stating – you need a Steve Co. Supply Crate Key to open this.

In case you are yet to open any of these chests, get a crate from the Minecraft store. It offered a total of 12 items for users to buy.

14. You can get rid of all the chats by just one combination

If you are tired of the endless messages on your chat, pressing Function key 3 + D will completely clear all your chats. You can use this combo to free your chat log from spammers or anything you want to clear from your chat.

15. Eating a puffer fish can give you a nausea effect

Yes, that’s right, the only thing in Minecraft that can give your avatar a nausea effect is a pufferfish. This effect continues for a length of 15 seconds.

Even though it is hard to kill the ender dragon, you can kill him in all sorts of fun ways. To be exact hitting the ender dragon with 400 shots of snowballs will do the trick.

17. When making a wither, heads should be placed at the end

Wither is a three-headed mob boss. Players summon a wither to try and defeat it in combat. Additionally, killing a wither will get you a Nether star.

18. The enchantment table interface is written in the standard galactic alphabet

Pressing F3 and B will pull up the hitboxes of any mobs and players – a mind-blowing Minecraft fact you surely did not know!

This is an interesting and useful command while attacking different mobs.

If the weather is getting cloudy and your snowman is outside, you better bring them inside. Snow golems can die by rain.

22. You can dye your dog’s collars

Minecraft allows players to dye their dog’s collars with any color in their inventory. Simply holding that piece of dye and right-clicking them, you can change their collars to any color you would like them to be.

23. Creeper was originally designed to be a pig

Although creepers were first introduced in 2009. This design was a failed pig model by Notch that he created. He mixed up the dimensions of the body. Creepers were also the very first mob added into survival mode.

Ever thought about those weird sounds Endermens make. Turns out those sounds are words that have been played backward and distorted.

25. Green Emeralds can only be found in Extreme Hills

Much to our surprise, you can find these rare and naturally spawned emeralds in only one destination, that’s the extreme hills biome. These ores are about 30 times rarer than a diamond.

26. There is an end to the Minecraft world

One of the most amazing Minecraft facts you may not know about is, that the Minecraft world does have an end. It would take players quite some time to fly to this location. It is about three million blocks away.

Boats in Minecraft can now ferry two people at a time, and they don’t get destroyed by collisions.

28. You can drive a saddled pig

If you are riding a saddled pig that is not on a track, you can literally drive the pig. But the controls are backward.

29. You can fall 22 blocks without dying

While playing Minecraft, be aware of the heights, as anything beyond 22 blocks will kill your avatar. Remember this, other objects like a Minecart or boats will fall slower than you

30. Ghast cannot detect you through cobwebs

Ghasts cannot detect you through cobwebs, but they can shoot fireballs through those cobwebs. Ghasts are cube-shaped Nether-dwelling mobs. Despite their ghost-like body, they cannot move through solid or semi-solid items.

The exact number of Minecraft facts in 2022 is countless. This list contains especially important pieces of information that will be beneficial for you players. With more updates, you can expect more and more amazing facts and features.