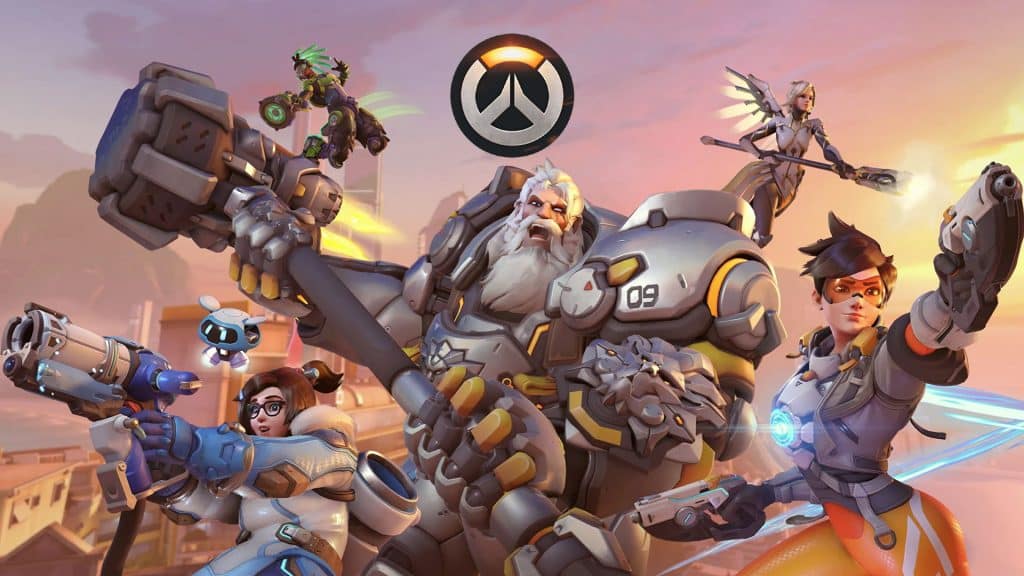 Whether you’re a lapsed player coming back after a hiatus, a newbie, or even a seasoned veteran, knowing which hero to pick can be intimidating.

Characters are constantly being nerfed and buffed as the meta changes.

Luckily we have your back.

Our methodology here was to compare the character to the current meta (as of 2022) whilst also taking into consideration the pick and win rate in competitive play as well as their synergy with other characters.

Characters of each type are grouped into general tiers ranking overall performance.

These are the heroes who are currently seeing the best results in competitive play.

Wrecking Ball has been at/near the top of most Overwatch heroes tier list for a while now.

Wrecking Ball has a steeper learning curve than most Overwatch heroes as he plays differently from anyone else.

If you can get the hang of him, he still excels at creating space and no other tank is as good as him at disrupting enemy front and back lines.

Similar to Wrecking ball D.Va has a bit of a steep learning curve, but she’s worth the effort. Her Defense Matrix can save the whole team’s butt. Her only real downside is if you mistime the Defense Matrix she’s easy to punish.

Moira’s ability to heal multiple squadmates at once is what puts her at the top. Combine her with other supports and her synergies shine. Her mobility is decent, and her cooldowns are short. She’ll keep the team alive.

This makes her one of the best Overwatch characters for healing in 2022.

With his excellent mobility and sonic arrows, Hanzo makes a great scout. He also deals good damage at mid-long ranges.

With a decent aim, his shots can kill with a headshot and his skills allow good burst damage.

McCree is all about dominating at short ranges and taking out the opposition’s softer members quickly.

He’s easily one of the best Overwatch characters at close range right now. Just flashbang an enemy and unload on them. His main weakness is his low ammo, make sure you have good aim!

These heroes are just a step behind the top of our Overwatch tier list but are still good picks. They are good on their own but excel when paired with the best Overwatch characters above.

Reinhardt is the tankiest of tanks.

He has massive base health and can plop down a huge shield to cover his team that takes a lot to shatter.  His rocket hammer and Charge skill give him good damage output for a tank if used properly.

His only weaknesses are mobility and a lack of reliable ranged attack meaning he’s pretty much close range only.

If there was an Overwatch tier list for tanks he’d still be near the top.

Zarya is a risk-reward tank.

With low HP she can be a little squishy.  Use her barrier skills properly to build up Energy though and she becomes a god of death with outstanding damage-dealing capabilities.

Her projected Barrier ability gives her good synergy with other tanks. Let them build up your energy and tank damage so you can dish it out tenfold.

Sigma is one of the more balanced heroes with good offense and defense offset by long-skill cooldowns.

The way his abilities work means he comes with a learning curve. Newer players are likely to get carried away with damage-dealing abilities and get themselves killed.

Roadhog is a golden oldie and a definite fan favorite.

His huge HP and regenerative abilities mean he is hard to take down whilst his chain hook is great for team play.

Hook an enemy and let your team annihilate them.  With good positioning and flanking, Roadhog can be a godsend.

Ana is perhaps the best support in the game- if you have good aim. She can deal decent damage as a sniper but she can snipe heal which makes her great.

Ana can deal with hefty doses of healing at long range, making her invaluable. This incredible healing puts right near the top of most Overwatch healer tier lists.

She tends to need backup however, she’s squishy and slow firing with no mobility skills.

She might be one of Overwatch’s best heroes, but her squishiness really lets her down

Mercy is all about single-target healing and mobility. She’s great at keeping one of your damage dealers alive and boosting their damage output. Her resurrection ability is a get-out-of-jail-free card for your team.

The only downside is it means the opposition will often gun for her first and she can’t fight back.

If Mercy is about healing, Lucio is all about speed buffs. His buff grants your entire team the ability to retreat when they’re in trouble.

Or close in and push the advantage when the enemy makes a mistake. His mobility gives him good survivability, but his damage output is poor.

Wielding dual shotguns, Reaper is all about heavy close-range damage.  He can melt even the strongest tanks.

He’s a little squishy so you’ll need to flank the enemy, kill who you can, and then use his invulnerability skills to get yourself back to safety again.

Echo is a high DPS, high mobility attacker with great versatility who excels at picking off weakened enemies. However, she’s easily picked off by hit scan heroes and flight can get you into some sticky situations if you’re not used to using it.

If played well, Ashe can deal out crazy damage at mid to long-range. B.O.B is crazy powerful but easily countered and Ashe has poor mobility.

This means she needs teammate backup while she’s dishing out the damage or she’ll go down quickly.

Doomfist may not be that popular, but he wins a lot of matches. At close range he’s deadly and Rocket Punch can easily KO most non-tank characters.

However, he’s not good at range, easy to hit and there’s a good chance you’ll be picked off before you get a chance to close the distance and use his awesome burst damage abilities.

Tier 3- Good But Not Great

These are characters who are still decent picks in the competitive meta, but you’ll probably rely on higher-tier heroes for backup. They tend to have one significant weakness that stops them from being one of the Overwatch’s best heroes.

Zenyatta is a case of jack of all, master of none. He’s supposed to be a support hero who can dish out damage.

In reality, he’s too squishy and slow to be a great damage dealer and his support abilities are mediocre. He’s likely to be picked off before he can start the punishment.

Widowmaker is a glass cannon through and through. If you have good aim then she’s great at raining down damage from a distance.

However, she’s beyond squishy and if you’re not good with her grappling hook you’re likely to get picked off sooner rather than later.

With better mobility/ health she’d be way higher on this Overwatch tier list.

Genji is another flanking/mobility-focused damage dealer. He’s all about using his enhanced mobility to get in, picking off single enemies, and getting out.

However, he’s neither the most agile nor the hardest hitting, meaning he’s easily countered. Overwatch’s best heroes need to excel in something, and Genji just doesn’t.

These are your average heroes. They don’t suck but they don’t excel at anything either. You might find you have some success playing with them but you’re unlikely to pull off many winning streaks either.

In a meta that currently focuses on tough tanks and mobile support, Winston feels a little lost.

His low, close-range only damage and general squishiness for a tank mean you should probably just pick Reinhardt.

Orisa is meant to be used in conjunction with other tanks. She’s at her strongest when her teammates rally around her using her as an anchor. If she’s left on her own she’s easily flanked and cannot strike multiple attackers at once.

But in a meta that rewards mobility, an anchor just slows you down.

Brigitte is a supporting character who excels in the right situation. Bunch her up with the close-range attackers where she can act as a tank/support hybrid who provides armor to those in need.

However, if she gets separated from the rest of her team her skills become largely useless and she can’t defend herself at range.

Tracer is a great harasser.  She excels at zipping around the map and dealing damage.

The problem with her right now is she doesn’t deal enough damage and you’ll find that in competitive play most attackers can handle themselves and don’t need Tracer to harass the other side.

With a buff to her damage Tracer could easily rise a couple of tiers in our Overwatch tier list but right now she just isn’t that useful.

There’s nothing wrong with Soldier-76, he just doesn’t excel at anything. He makes a great entry point for newbies to get the hang of the game as he’s a jack of all trades. However, you’ll never shine playing as him.

Players soon leave him behind however once they find their preferred playstyle.

Like Tracer, Junkrat is currently about harassing the enemy. His AOE attacks are great at chipping health and weakening the other side.

However, he lacks the high damage-dealing abilities of other attackers.

These tier 5 heroes are the ones that don’t necessarily suck, it’s just that there are better options out there for the niches they cater for.

Mei is all about debuffs and causing mobility problems with freeze walls. However, she has poor damage output and has a steep learning curve.

Your team is better off having another damage dealer.

Pharah’s rocket launcher is beginner-friendly and allows newbies to dish out decent damage and her mobility allows them to stay out of trouble.

However, experienced players will be able to contribute more with the higher-tier characters. There’s a low ceiling to Pharah.

This is the graveyard for once-popular heroes nerfed into oblivion. They can still be fun to play but have no competitive place in the current meta.

Whenever you see the Overwatch character being ranked, these guys are usually at the bottom.

No one likes campers and that’s Torbjorn’s whole schtick. In a meta that encourages close-knit teamwork and mobility, the fact is Torbjorn is often too far away to be useful.

Bastion has great damage output potential if you can stay alive long enough. But outside of lower-level play you never will. If you do manage to master him, he’ll probably get nerfed again.

Sombra needs a great team with a strategy and good communication to shine. Otherwise, her abilities aren’t much use, and her damage dealing sucks.

In the chaos of battle, strategies and comms tend to fall apart.

Her low mobility and health just make it too difficult to keep Symmetra alive long enough to be of much use.

In the right hands, she’s dangerous but very few players can use her effectively.

So, Who Is The Best Character in Overwatch?

Tbh, there is no “best character” in Overwatch.

The best Overwatch characters are the characters that fit the game’s current meta.

This is something that is shifting constantly.

Besides this, the best characters in Overwatch are the ones that fit your play style. Different heroes suit different people’s playstyles.

This Overwatch tier list is meant to help you choose but it is not the be-all and end-all.

At the end of the day, it’s always best to experiment and find the heroes you enjoy playing as and build up from there.