How To Update Among Us? (Mobile, PC, Bluestack & Console) 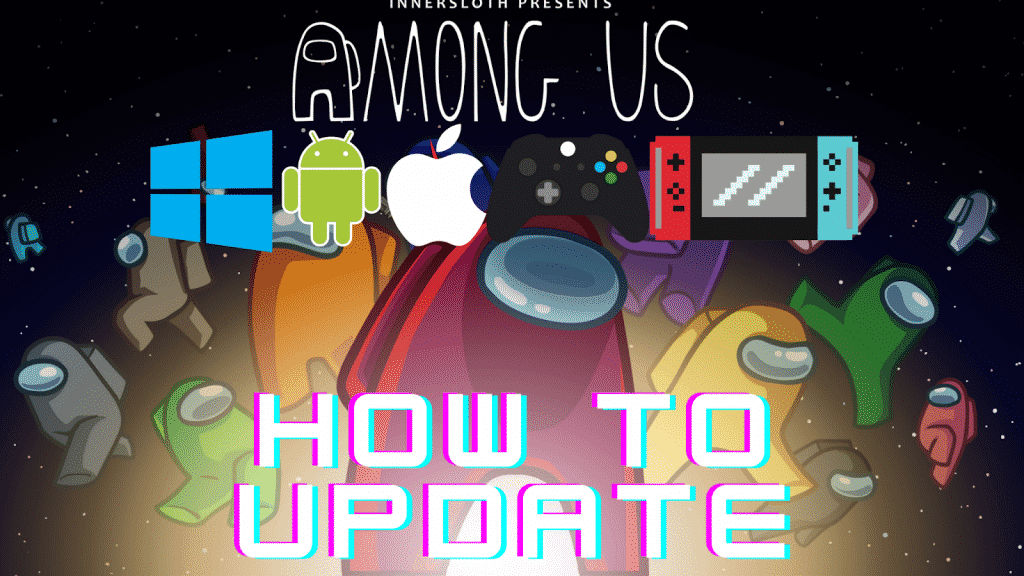 Although Among Us has been around since 2018, it didn’t really catch up until late 2020. But once it did, Among Us turned into a cultural phenomenon around the globe. It’s one of the few modern-day video games that encapsulated fans of every demographic.

And to keep things engaging, Among Us updates have become more and more frequent.

Moreover, another major update that includes new roles, UI overhaul, and a new Among Us map is on the way.

So, we decided to make a guide on how to update Among Us so you can enjoy this and every upcoming content update at the earliest.

How to Update Among Us on PC?

To play Among Us on PC, you either have to use Steam or download the game from the Microsoft Store. And since these 2 are totally different types of platforms, the update processes are different too.

Unless you have disabled automatic updates, Among Us will be updated as soon as the update is available on the Microsoft Store.

You can still manually check for and install updates by visiting the Microsoft Store.

By doing so, the store will check for updates available for all the games in your library. If found, the download and installation of the update will start automatically.

Update Among Us on Steam

Now, if there is any pending update for Among Us, you’ll see it right in front of you. Click on the Update button to start the installation.

And while the game is updating, here’s how you turn on automatic update download and installation for Among Us on Steam.

Now, Steam will automatically update Among Us. You can do the same to turn on automatic update downloads for other games in your library too.

How to Update Among Us on iPhone, iPad, and Android Devices?

The best part about Among Us on iOS and Android is that it is completely free, and mobile devices get bug-fix updates faster than PC or Console.

As far as updating Among Us on mobile devices is concerned, it’s just like updating any other app or game.

Update Among Us on Android

All the apps and games in your android device automatically download and install updates when connected to a Wi-Fi connection.

To manually update your apps and games, here’s what you have to do:

You can also check for updates of all the apps and games by clicking on your profile picture and opening the ‘Manage apps and device’ option in the Play Store.

Update Among Us on iOS/macOS Devices

Whether you’re playing Among Us on an iPhone, iPad, or a Mac the process of updating Among Us is the same because all Apple devices use the App Store now.

To check out every upcoming automatic update, you can click on your profile picture in the App Store. Click on Update All, and all available updates will be downloaded in the background.

How to Update Among Us on Bluestacks?

Downloading apps and games in Bluestacks is similar to doing so on your Android phone.

That said, here’s a quick guide on how to update Among Us on Bluestacks.

If there is a pending update, you’ll see the Update button in green.

Once the download is complete, you can now enjoy the latest version of Among Us on Bluestacks.

How To Update Among Us on Xbox, Playstation, and Nintendo Switch?

Admittedly, it is a mobile and PC game but the popularity and demand have forced Innersloth to release Among Us on popular consoles. The game is now available on Xbox One, Xbox Series X/S, Playstation 4, and Playstation 5.

Since the new Among Us content update will be rolling out on these consoles too, you should know how to update Among Us on whatever console you are using.

Update Among Us on Xbox

Although Xbox consoles will notify you when an update for Among Us is available, you’ll have to start the download and installation process manually.

No sweat, though. It’s pretty simple.

Update Among Us on Playstation

Even if Playstation doesn’t notify you, Among Us has an in-game notification to let players know when there is a new update available. To update Among Us on Playstation, you’ll have to first manually check for any available updates.

If there is an update available, it will start downloading. Make sure to provide necessary permissions for unproblematic download and installation.

Update Among Us on Nintendo Switch

To update Among Us on your Switch, you first need to make sure you are connected to the internet. After that:

And that’s how to update Among Us on every platform and console. Although the game updates automatically on the majority of platforms, it’s still good to know-how.