What If Fallout 2 Was FPS? Here’s The Answer 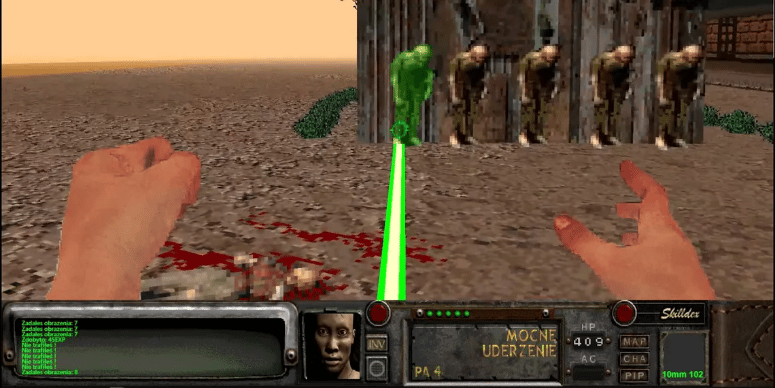 Did it ever cross your mind of a first-person shooter (FPS) Fallout 2? I guess not, and here’s what it would look like.

For anyone unaware, the earliest Fallout games weren’t FPSs but rather top-down, isometric, turn-based RPGs. Some fans have tried to update Fallout 1 and 2 by putting them in the engine used for Fallout 3, but now someone has gone back to Fallout 2 and recreated it from scratch in first-person while retaining the original game’s graphics and maps.

Fallout 2 FPS by a modder

To begin, we see ConstructVOD in front of a crowd of regular folks who are all holding out their hands to shake his. All of the characters’ sprites appear in front of you at once, giving the game a look and feel reminiscent of the original Doom. Then, with a sudden burst of energy, they rush at their foes, hurling punch after punch before displaying their firearms and other melee weapons.

Enemies you’re aiming for marks in green, and a massive green bar indicates the direction you’re facing. You’ll have a better idea of where to aim your shots (or punches, if you’re into that sort of thing) with this handy aid. The modder reconstructs Klamath and Arroyo and both are available for exploration at this time.

A crimson vignette will flash across the screen whenever you take damage from an attack. Instead of taking in turns to fight, enemies will constantly fire at you as long as you’re within range. In a fight, your attention is now divided between maintaining your health, choosing your position, and making your attacks.

Well, will this become an entirely new game in itself?

A new power armor overlay, as you can see in the same video, provides an interesting new angle while donning a suit. It’s very similar to Fallout 4, yet it retains the classic look of the first three games. His channel features regular updates and demonstrations of the game in action, but if you just can’t wait to get in, early access is now available.

Given the new perspective, the controls are different from the original Fallout 2, but the modern bindings of WASD for movement, CTRL for sneaking, LMB for attacking, and TAB for stats should be immediately familiar. If you weren’t into the first Fallout 2 but are still interested in exploring this universe, this mod might be for you.

Even while the recreation is still in its early stages, it provides an intriguing look at what Fallout would have been like if it was an FPS.

Well, there are a couple of XBOX FPS releases that Sony has in store for you this year, and they might be coming earlier this year.