Warframe is slowly approaching its ten-year anniversary, which means it has had ten years’ worth of Warframes released.

At the time of this list, there are 50 Warframes available, so unless you’re experienced with the game and pay a lot of attention, there is no way to know which are the best Warframes in the game.

Grinding out a new Warframe takes a lot of time, patience, and energy (or a deep pocket).

So, this Warframe Tier list is important because no one wants to spend all of that time and energy just to pick up a low-tier Warframe that gets wrecked in missions and PvP.

In this Tier list, Warframes will be given a grade based on how strong they are overall. These rankings take into account PvP as well as PvE, so highly rated Warframes will be dominant, no matter which game mode they’re utilized in.

Just as a rule of thumb, Warframes that are ranked A tier and above can be picked up by any player. They will stomp enemies with ease, and they are very safe picks if you want a strong Warframe.

On the other hand, the C tier and below will be much weaker and require much more skill to make them work.

OP Frames in Warframe – Just Not the Best Warframe characters

Strong Frames – not Over Powered

Balanced Frames – Play them if they look Fun

Let’s dive a little deeper into the SS tier Warframes.

These are the best of the best Frames that anyone can take into battle and dominate (after some practice, of course). Some of these Warframes are easier than others, and their strengths will be based on which mission you take them on.

Overall, though they are all fanatic picks if you’re looking to pick up a new Warframe. Most of these Warframes are not only very strong, but they are also very fun, so you will enjoy them whether you’re casually playing or trying to min/max your way to the top.

Saryn is considered by many players to be the best Warframe character of all time. She deals incredible damage when she is given an optimal build.

Saryn is perfect for new players because she has rather simple mechanics but can still completely wreck a room full of enemies. She is also a lot less punishing than other Warframes, due to her high health pool and exceptional armor.

Players constantly take Saryn into the endgame, so you can be very confident that your time will not be wasted grinding for this Warframe.

Next up is our residential gunslinger, Mesa. Mesa is one of the most fun Warframes in the game. This is due to her insane DPS and her high mobility. Playing Mesa feels like starring in an action movie.

The only “downside” to Mesa is in her difficulty. She has below-average shields, so you have to play a little smarter in order to stay alive. However, players that enjoy difficulty and like to be rewarded for smart positioning will absolutely love Mesa.

Every Farm group in the game will welcome a Mesa with open arms, so if you’re looking for a new exciting Warframe to play, then you will not regret choosing Mesa.

Looking for a more support-oriented Warframe? Look no further! Wisp is a fantastic support that can also deal massive damage when the situation calls for it.

She’s quite easy to obtain, all things considered, so even if you end up not enjoying her, it wasn’t a lot of time wasted.

She sees a lot of play as a support, but can also run as a DPS, so she is perfect for players that are still trying to find their role or want to save some time by grabbing a multi-faceted Warframe.

Wisp is practically a two-for-one deal after all. Her main downsides are her squishiness (low shields) and her lack of AOE damage. You will want to have your group make up for her shortcomings, but overall most groups will love to have a Wisp supporting them.

Pardon the pun, but Octavia rocks; Literally. Octavia is probably the most unique and fascinating Warframe in the game. In fact, she might be one of the most unique characters in any hero-based game.

Stat-wise she might not be the best Warframe character, but the players that play Octavia would argue she is the most fun to play. Whether you compose your own melody or grab one off of the Warframe forum, your groups will love having your music accompany them on missions.

Octavia is an automatic morale boost, which instantly makes her worth the grind. Take note that Octavia is also one of the most complex Warframes in the game, so make sure to master the fundamentals before you decide to pick up this Frame.

Voidrig is a great Warframe for newer players because he is easier to get than a lot of stronger Frames in the game.

Voidrig is also quite easy to play, so new players will be able to instantly pick him up and start slamming missions. He is a balanced Frame that will fit fine into any group and do well in every mission in the game.

If Voidrig is modded correctly, he can deal millions of damage with his 4th ability. So if you enjoy seeing lots of digits in your damage counter, then Voidrig is the Warframe for you.

On the other hand, he is not self-sustainable without specific mods. His 4th ability stops his movement, and he is vulnerable and liable to die early on in most missions unless he constantly uses his 2nd ability.

Finally, we’ll talk about a tank. Rhino is one of the original Warframes and will be the first Warframe for many new players since he can be farmed early on. He is also fantastic for new players because of his versatility.

He is a tank, but can also do quite a bit of damage, and he can heal himself, so he is less likely to be punished when played by less-skilled players.

He is fun to play and useful in most groups and on most missions. He is a great Frame for solo players as well due to being an all-rounder. We recommend Rhino for players that want a new Warframe that they can grab quickly and keep through the endgame.

Warframe’s PvP is not as popular as we wish it was and it does not appeal to new and casual players at all. If you are ready to charge into PvP, then you absolutely need to have the best setup, because everyone else will have it as well.

Playing PvP without building specifically for it will be frustrating, and frankly unfair. PVP is not updated much, so if something is busted, it will likely stay that way.

We recommend taking advantage of cheese if you want to play PvP so that you will have a fighting chance against the PvP vets. That’s why we decided to add a list of the best Warframe characters and builds for PvP.

Bladestorm is Ash’s bread and butter. Running covert lethality mod and daggers is a great way to maximize Bladestorm’s power.

Bladestorm is a fantastic ability to run in PvP and PvE. It takes a little bit of practice to master Ash and her Bladestorm ability, but once you get it down you will start to win a lot of PvP matches.

Valkyr is one of the oldest Frames in the game, and she is honestly one of the worst Warframes when it comes to PvE. However, thanks to her Hysteria ability, she can actually be pretty viable in PvP matches.

If you build Valkyr for Power duration on her ultimate (Hysteria), then you will be able to stand with the best of them in PvP.

Loki is great for advanced players looking to dip their toes into the PvP scene. Take a dark color for energy, and run the popular invisibility build and you will be an annoyance in your matches.

Loki is best for manipulative players that love to outplay enemies with tricks and slyness. If you take Loki into PvP, you will build a nice portfolio of Warframe highlights and outplays.

We covered Rhino earlier, and he’s back. He is one of the best Warframes in the game, whether he is used in PvE or PvP. While your PvE builds may vary, we highly recommend maxing out Iron Skin when you play PvP.

Maxing out Iron Skin makes Rhino practically invulnerable, so he is perfect for tanky players and for players that like less punishing gameplay.

We recommend trying out Rhino for your first few PvP games until you can get a feel for how others play.

The PvP modes in Warframe are not extremely popular, so the players that play are going to be very good. We recommend choosing your favorite Warframe on this list and practicing as much as possible.

Playing many Warframes is fun, but the only way to truly master PvP is to focus on playing one Warframe and learning every matchup. 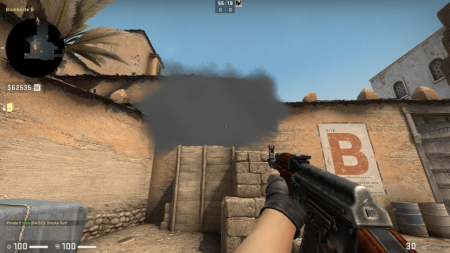 Smoke grenades and shields are often banned in CS servers. This is because, even though…