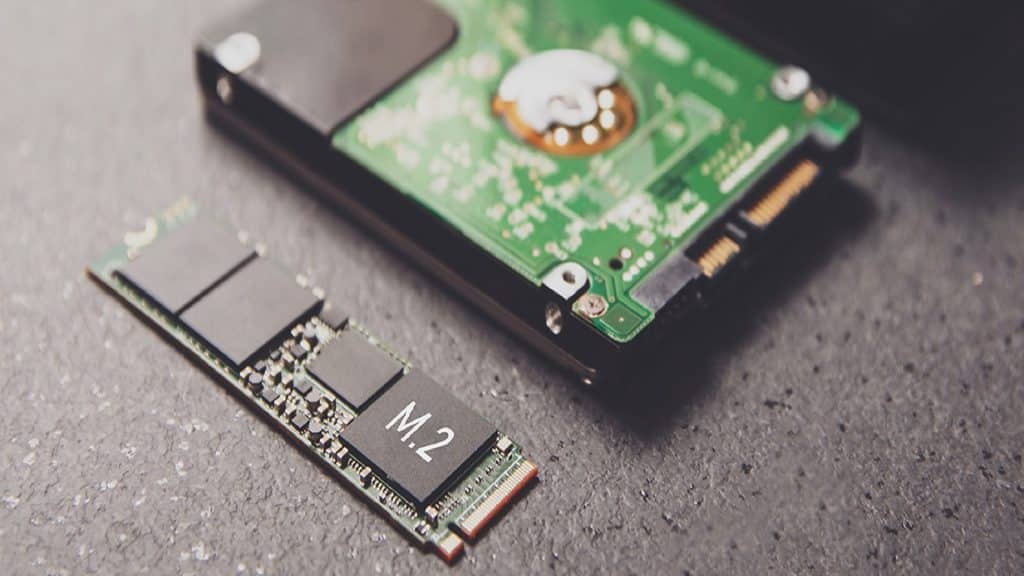 So in this post, we have tried to finally deliberate and decide between SSD vs HDD for gaming. We have detailed how both of these storages impact your gaming performance.

Read on and find out how to strike the right blend of SSDs and HDDs to bring your build’s price down without compromising with its performance.

SSD vs HDD for Gaming: How to Strike a Balance Between Performance and Price

HDDs have been doing the rounds since the 1950s. Yes, they were pretty bulky and expensive but over the years they have become quite compact and affordable.

However, with the advent of SSD, gamers are caught in a fix whether to opt for the performance-centric Solid State Drives. As HDDs use rotating disks at 7200 RPM to read/ write data, there is an upper cap to it.

Seagate Exos is one of the fastest HDDs that offers speeds up to 524MB/ second. On the other hand, as SSDs don’t rely on rotating disks or read-write heads, their transfer speed is 14 times that of HDD.

An SSD can give you transfer speeds of over 7000MB/ second.

But hold on, SSDs don’t come cheap. Due to steep semiconductor fabrication prices, an SSD can cost you around 9 cents per GB. HDD on the other hand costs 2 cents per GB.

So let’s find out whether to use HDD or SSD for video games. And also how you can bring down your storage cost.

Video games like Assassin’s Creed: Valhalla and Red Dead Redemption 2 installation require over 100GB of space. So to have at least ten video games backed up in your system you would require roughly 1TB space.

Now, to backup your games, is SSD better than HDD?

Sure, HDD read-write is relatively sluggish, but considering you are using the space for backup, HDD makes perfect sense.

SSD vs HDD: Ideal Storage Option for a Boot Drive

One of the best possible uses of an SSD is to use it as a boot drive for your gaming PC. It will slash your booting time to half if not less.

As you can see from the above statistics, Windows boot time for SSDs is almost half that of HDDs. Using an SSD boot drive will let you start up your system faster.

No matter which video game you are playing you won’t notice any difference in graphical rendering or gameplay while playing on a hard drive vs SSD.

But what about the game’s boot time?

Yes, you will notice an improvement in the game boot time. That means you will be able to launch your game faster, switch between challenges quicker and notice an overall improvement in loading game artifacts.

Even the bulkiest of games are under the 200GB mark and will remain so for some time, installing your video games on a 500GB SSD will do the trick.

This way you need not break the bank to get an SSD with more storage while you will benefit from its fast boot time.

As SSDs don’t have spinning discs and read-write heads for data exchange, they are more durable than HDDs. Because of this very reason SSDs are quieter too. This means they won’t contribute to noise apart from your cooling unit.

Due to the friction of rotating discs HDDs tend to heat up on prolonged use, demanding more of your cooling unit. On the other hand, SSDs are way cooler due to their flash memory.

On top of that SSDs’ memory won’t be wiped off by a strong magnetic field. As SSDs use floating-gate transistors, it is impervious to a magnetic field (well, up to an extent of course).

Should I Install Games on SSD or HDD?

Yes, SSD promotes fast read-write. But it has nothing to do with the graphics rendering of your video game. That’s all GPU and CPU.

So, from a gaming perspective using SSD or HDD for installing video games won’t give you an earth-shattering difference. But SSDs can bring down your game’s boot time.

On an SSD drive, your game will launch quicker and process faster. However, the core gaming experience will remain the same.

Finding The Right SSD For Yourself?

SSDs have different form factors. Each of these form factors is physically distinct and has a different way of connecting and communicating with the motherboard.

Depending on your gaming setup and available hardware you can go for whichever form suits you.

They are fitted inside the drive bay of desktops and laptops. As they follow SATA protocol, you can easily switch your HDD with a SATA SSD, without the need for any additional connecting interface.

They are quite expensive when compared with HDD, but cheaper than other forms of SSDs

The M.2 is a leaner alternative. Unlike the bulky 2.5 inch SSD, the M.2 SSD is like a small thin rectangle. You can plug it directly on the M.2 socket of your motherboard. They follow NVMe protocol and don’t require additional connectors.

You can find the M.2 slots at the back of Mini-ITX motherboards or under the thermal shields. In case you are unable to find your motherboard’s M.2 slots, refer to the manual for more information.

Due to their compact size, M.2 SSDs are aimed towards ultrabooks and tablets. And yes, they don’t come cheap.

All In Card (AIC) SSDs are another type of SSDs that connect to the PCIe slot of your motherboard for data and power. Just like an M.2 SSD AIC communicates directly with the system using the PCIe lanes.

As AICs have a dedicated power source, gaming enthusiasts can also opt for RGB lighting on them. AICs are priced similar to M.2 SSDs however a configurable RGB option may drive the price up. But believe me, it does look cool.

Portable SSDs are modular, pluggable SSD variants. You can use Portable SSDs for backup. Back up your archived games, media, and other data on a portable SSD by connecting to a USB port.

SSD vs HDD – How To Get The Best Bang For Bucks

SSDs are faster, durable, and efficient. Their only drawback is they are way more expensive than a mechanical hard drive. So, if you vehemently use SSDs in your build you will be spending a fortune.

But there is a way to cut down the cost by using a combination of HDDs and SSD drives rather than looking for SSD vs HDD for gaming.

As SSDs speed up your PC boot time, it is preferable to use one as a boot drive than an HDD. You can also use SSD drives to install games and other editing applications that demand fast read-write access to the memory.

This way your PC will boot faster, and launch games quickly.

Once you have completed a video game and want to archive it, you can resort to an HDD for backup storage. This will help you bring down the cost of your build without overkilling it.