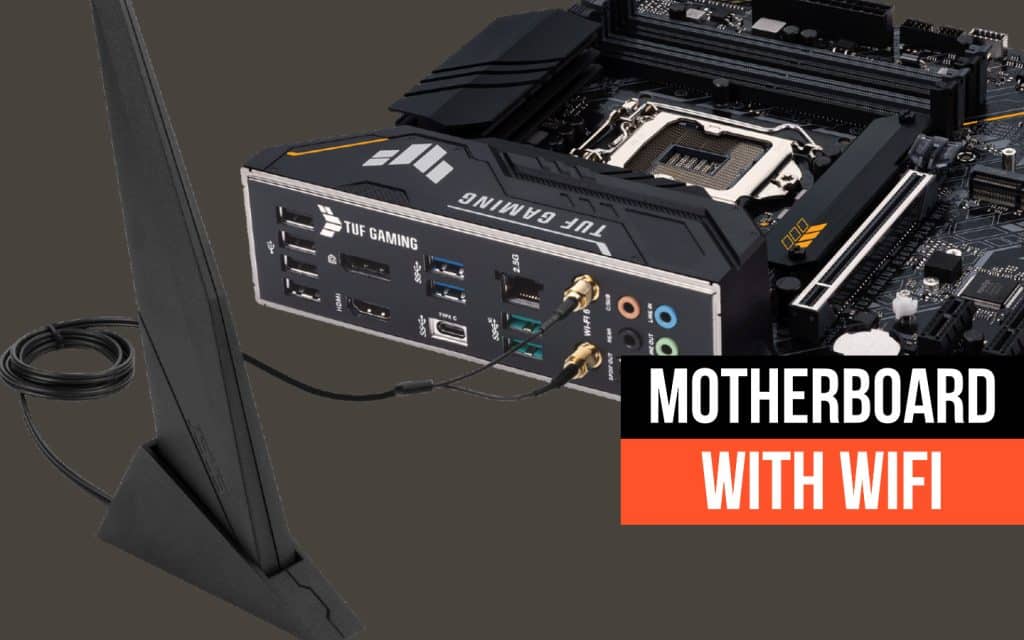 Is your ethernet cable messing with your gaming setup? Do you want to declutter your gaming desktop and want the freedom to move your CPU cabinet around? Well, all you need is a gaming motherboard with WiFi.

Here are some of the best wireless motherboards, their features, and USP. Skim through the list and select the one you fancy.

There’s one for everyone!

Gaming motherboard with WiFi and Bluetooth

The MSI MPG Z490 is a gaming motherboard with WiFi and Bluetooth. With 2 PCIe x16 Slots you can try different setups with your gaming hardware. It supports up to 128GB dual-channel DDR4 RAM.

With Dual-band WiFi, Bluetooth, and USB-C connectivity, it’s definitely a future-proof and affordable motherboard. It features built-in addressable RGB lighting that adds to the oomph factor.

Its extended heat sink will enable you to stretch your gaming hours without any overheating issues. The high-definition audio processors will compliment your gameplay and won’t require any aftermarket modifications.

With the Gigabyte Z390, you can make the most of Dual-channel DDR4 and support three M.2 SSD devices. It has high-end audio amps and supports addressable LED. The USB TurboCharger is a boon and can help you to charge up your gaming headsets and other peripherals in a jiffy.

That’s not all. It supports 8th and 9th Generation Intel Core Processors allowing you to choose from a range of processors. This way depending on your gaming inclination you can dictate which processor best suits you.

The ASUS ROG Strix Z490 with a built-in WiFi motherboard can stand the test of time. The dual PCIe 3.0 M.2 lets you leverage both PCIe 3.0 x4 for NVMe and SATA. With the SONIC STUDIO III, a completely immersive audio experience is guaranteed.

Yes, this motherboard is only compatible with the 10th Gen Intel Core Processor and is powered by 14+2 power stages. With the ROG AI, this motherboard lets you overclock your CPU. It also features RGB lighting options.

One of the prominent features of its design is how quiet the overall setup is. Thanks to ample heat sinks and thermal optimization techniques, the motherboard promotes low-noise cooling.

It supports USB Type-C and USB-3.2 connectors for connecting and charging your gaming accessories.

You can use 8th and 9th Gen i5, i7, or i9 processors and opt for dual-channel DDR4 memory. One of the USP of this motherboard is its 2X Turbo M.2 interface. These dual M.2 slots can deliver you read/ write speeds of up to 32GB/s.

This motherboard can support different Generation Intel processors and has all the features of a top-end gaming motherboard.

The ASUS ROG Strix B550-F Gaming is one of the most affordable wireless motherboards. It features the latest PCle 4.0 to maximize data storage. The 2.5Gb Ethernet connectivity promotes faster connectivity compared to conventional Ethernet.

It pairs perfectly with 3rd Gen AMD Ryzen CPUs and Zen 3 Ryzen 5000 processors. In terms of memory, you will get 4 Dual-channel DDR4 slots. This gives you an option to upgrade RAM without changing other hardware components.

The Stig B550-F comes with a fanless VRM and chipset heatsinks to provide optimized cooling solutions devoid of noise. You can use this motherboard to set up a well-balanced rig without burning a hole in your pocket.

If you are looking for a cheap motherboard with WiFi, the GIGABYTE B450 AORUS PRO is one of the best wireless motherboards out there. It comes with extended heat sinks and cooling fans to keep your processor cool during strenuous gaming marathons.

In terms of connectivity, it is one of the few gaming motherboards that features Dual-band WiFi. It also features USB 3.1 Gen 2 with USB Type-C & Type-A slots for seamless connectivity with other gadgets.

Given its utilities and pricing, it is one of the most affordable gaming WiFi motherboards in the market.

If you are looking for an affordable light-weight micro ATX motherboard with WiFi, the MSI MAG A520M Vector might be the perfect choice for you. It has an extended heatsink and thickened PCB for effective heat exchange.

It supports AMD Ryzen processors and has extended thermal solutions for M.2 slots too. This ATX motherboard can also feature RGB lighting.

The MSI MAG A520M has a compact design with a great heat dissipation mechanism to keep your rig cool. It is one of the cheapest micro ATX gaming motherboards.

Does my motherboard have WiFi?

Desktop motherboards don’t come with built-in WiFi. However, there are variants where you can get WiFi on the motherboard. Generally, laptops have WiFi as they are mobile devices.

Desktops on the other hand come with ethernet ports rather than WiFi as a default. Make a note that a motherboard with WiFi will be more expensive than one without.

Is it better to get a motherboard with WiFi?

It purely depends on your individual preference. You will enjoy a similar connectivity experience or even better using a wired ethernet connection. However, a motherboard with WiFi have their own perks

– Your CPU will be portable and you can move it around and enjoy internet connectivity wherever you have a decent WiFi network.

– As there is no need for a wired ethernet connection there will be less clutter.

– In an office space, all your desktops can connect easily to the WiFi network. On the other hand, an ethernet router can only handle up to 50 connections.

How do I add WiFi to my motherboard?

Obviously, you can switch to a motherboard with built-in WiFi. But there are a few ways to add WiFi to your desktop. Here’s how

USB WiFi Adapter – This is the easiest way to add WiFi connectivity to your desktop. Simply plug your WiFi adapter in your CPU’s USB socket and you can connect to the local WiFi.

It’s cheap, and installing it is as easy as plugging in a USB drive.

Are WiFi cards good for gaming?

WiFi expansion cards are good for gaming and streaming. With a decent WiFi card, you can easily enjoy a speed of roughly 1000Mbps.

If you are looking for even faster connectivity (and if your current network bandwidth isn’t the bottleneck), ethernet is the only way out.

What happens if my motherboard doesn’t have WiFi?

If you don’t have WiFi on your motherboard, you have to rely on your ethernet for network connectivity.

Is Ethernet faster than WiFi?