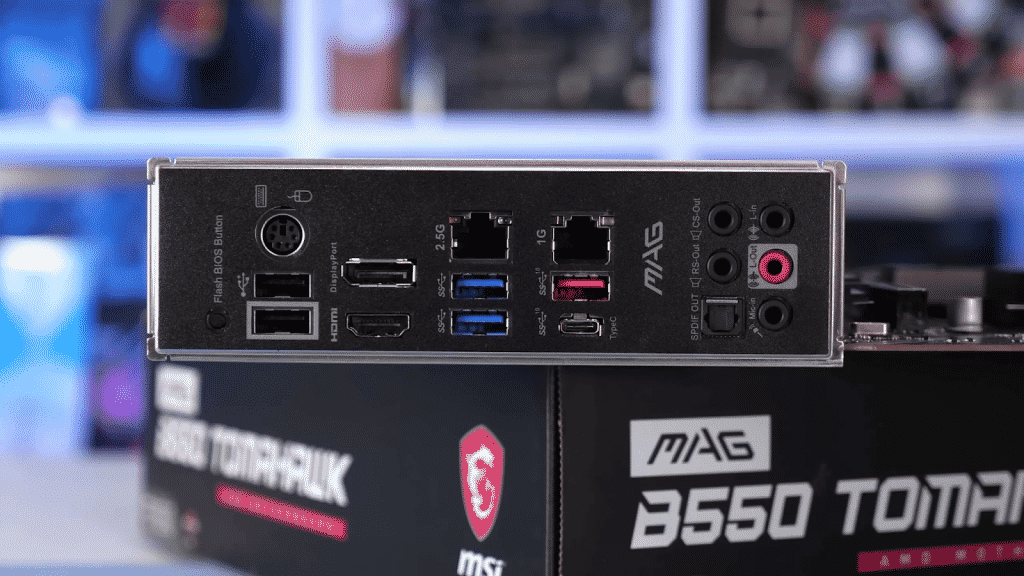 The B550 motherboard eases the transition between B450 and the expensive X570. If you are looking for better VRMs and Gen 4 PCIe support, then the B550 is the performance-centric and relatively cheaper alternative to B570.

Let’s get started, shall we? The MSI MAG B550 Tomahawk is a decent B550 motherboard for your AMD processor. It has well-balanced features, a great overclocking mechanism, and is moderately priced.

The motherboard supports 128GB Dual Channel DDR4-SDRAM and features a 13-Phase 60A Power Delivery. In terms of connectivity, you’ll get 2 x Ethernet LAN RJ-45 ports for connecting to the internet.

All in all the MSI MAG B550 can be used for gaming, video editing, and even live streaming. But if you are looking for a motherboard with wireless connectivity, this is not the motherboard for you.

If you are looking for a PCIe Gen 4 motherboard for your mini B550 ITX build, the  ASUS ROG Strix B550-I will do just fine.

It features 8+2 DrMOS power stages and advanced VRM and PCH heatsinks for effective heat exchange. The ASUS ROG Strix B550 has WiFi 6 capabilities and 2.5Gb LAN for wired connection.

Thanks to the inbuilt Bluetooth V5.1 you can also connect gaming or audio peripherals wirelessly without hogging on other ports.

Apart from its high-quality VRAMs and WiFi 6 capabilities, the Gigabyte AMD B550 Aorus is just another B550 motherboard with top-of-the-line heatsinks. Also, it’s quite expensive for a B550.

Yes, the motherboard does support 128GB DDR4-SDRAM and boasts of a 16-Phase 70A power supply. This B550 motherboard also has 3 M.2 slots which can be used as boot drives or for installing executables.

If you are looking for a future-proof B550 motherboard and don’t mind shelling a few hundred dollars, the Gigabyte AMD B550 Aorus will fit in just right.

The ASRock B550 Phantom is a budget gaming motherboard for the masses. This WiFi-enabled motherboard has ample PCIe lanes for connecting your gaming hardware components. Not the best B550 motherboard, but definitely value for money.

This motherboard supports 3rd Gen AMD AM4 Ryzen and above. It has an 8 Power Phase Design with a built-in Intel AC 3168 WiFi card. It also features addressable RGB headers that will take the aesthetics of your rig to a whole new level.

In the future, if you think of upgrading your gaming peripherals, the PCIe 4.0 and PCIe 3.0 lanes will help you customize your gaming PC without replacing the motherboard.

Top of the line B550 WiFi Gaming Motherboard

The NZXT N7 B550 is a neatly packed motherboard. With WiFi 6 & Bluetooth connectivity and 10 USB ports, it has all the makings of a future-proof motherboard.

The motherboard has two M.2 connectors for storage devices and supports Multi-GPU AMD CrossFireX Technology. The M.2 storage can speed up your boot time and improve game rendering.

It also supports a 5.1 audio system to elevate your gaming experience to a whole new level. If you want you can add RGB lighting to the motherboard as well as the fan controller, there’s still room for it.

The ASUS ROG Strix B550-F is by far the best B550 motherboard which brings together great gaming capabilities and high-performance networking. This PCI Express 4.0 motherboard is the perfect coupling for your 3rd Gen AMD Ryzen & Zen 3 Ryzen 5000 CPUs.

The motherboard has two M.2 slots and 4 memory slots that support dual-channel DDR4 RAM. It even features a fanless VRM and a chipset heatsink for fast heat exchange.

From a connectivity standpoint, you can enjoy seamless wireless connectivity with the onboard WiFi 6 and fast wired connection using the 2.5 Gb Ethernet.

The ASUS ROG Strix B550-F also features an AI noise-cancellation microphone that kills ambient noise while interacting with your clan during your multiplayer gaming sessions.

The ASRock B550 Taichi blurs the gap between X570 and B550 motherboard. This is one of the best-looking B550 motherboards and features ample PCIe lanes and dual M.2 memory slots.

The motherboard has a steampunk aesthetic and can be powered by a 3rd Gen AMD AM4 Ryzen processor. It has two M.2 slots and an 8x SATA port that supports speed up to 6Gbps.

In terms of connectivity, you will have WiFi 6 at your disposal, along with Bluetooth 5.1. You can also connect your PC using the 2.5Gb Ethernet port.

The ASUS ProArt B550-Creator is tailor-made for creative professionals and content creators. You can configure an AMD Ryzen 5000 processor in the AM4 socket to get all the processing power your editor demands.

The motherboard is powered by 12+2 Power Stages and is PCIe 4.0 ready. It also features dual Thunderbolt 4 Type-C ports that let you charge your other gadgets quickly.

The ASUS ProArt B550-Creator also has Dual 2.5Gb Ethernet and a two-Way AI Noise Cancelling microphone to keep ambient noise to the minimum.

This Gigabyte B550 ITX motherboard features PCLe 4 lanes, WiFi 6, and 2.5Gb Ethernet connectivity. It supports direct 8 Phases 90A Smart Power Stage. The motherboard has a Multi-Layered design with an extended heatsink.

You can achieve fast boot and read-write capabilities from the Dual NVMe PCIe and 4 M. 2 slots. The M.2 comes with a thermal guard to enhance performance.

Such advanced heat sinking capabilities will keep your system cool during round-the-clock gaming.

The motherboard also features AMP-UP Audio with Nichicon Audio Capacitors to improve your gameplay experience. The best part is, you can have all this without spending a fortune.

The ASUS Prime B550M  is an excellent micro ATX motherboard with WiFi 6 connectivity. Its HDMI 2.1 port supports 4K rendering at 60Hz and has enough heat sinks and cooling options for extensive gaming.

The VRM & chipset heatsink with hybrid fan headers will help you keep your rig cool so that you can enjoy long break-free gaming sessions.

Between X570 and B550, both motherboards have their similarities and dissimilarities. The below table will help you straighten things out.

Both B550 and X570 provide PCIe Gen 4 graphics and storage support. They both have dual graphics and overclocking support. However, the X570 gains an edge over the B550 in terms of general-purpose lanes and chipset uplink.

X570 also triumphs in terms of VRMs. X570 motherboards have more VRMs compared to B550, thus allowing the X570 to have better control over the power delivered to the CPU.

So between B550 vs X570, the X570 has better overclocking ability than its Intel counterpart.

After looking at some of the best B550 motherboards, it all boiled down to this.

The ASUS ROG Strix B550-F has the best VRM. It has an enlarged fanless VRM & chipset heatsink to promote the best performance without overheating your rig.

– It features 6 Cores and 12 processing threads

– It has a massive 35MB GameCache that boosts game performance

Even though the Ryzen 5 3600X comes with an intimidating price tag, with this processor at its core, your PC can render the most complex graphics while running other heavy processes without breaking a sweat.

Depending on your budget you can go for the Gigabyte AMD B550 Aorus Master or the ASUS ROG Strix B550-F.

You can find out the list of supported motherboards for Ryzen 5 5600x here.

If you want a top-of-the-line motherboard for your Ryzen 7 or 9 processor with better VRMs and PCIe support, X570 will be the best choice for you.