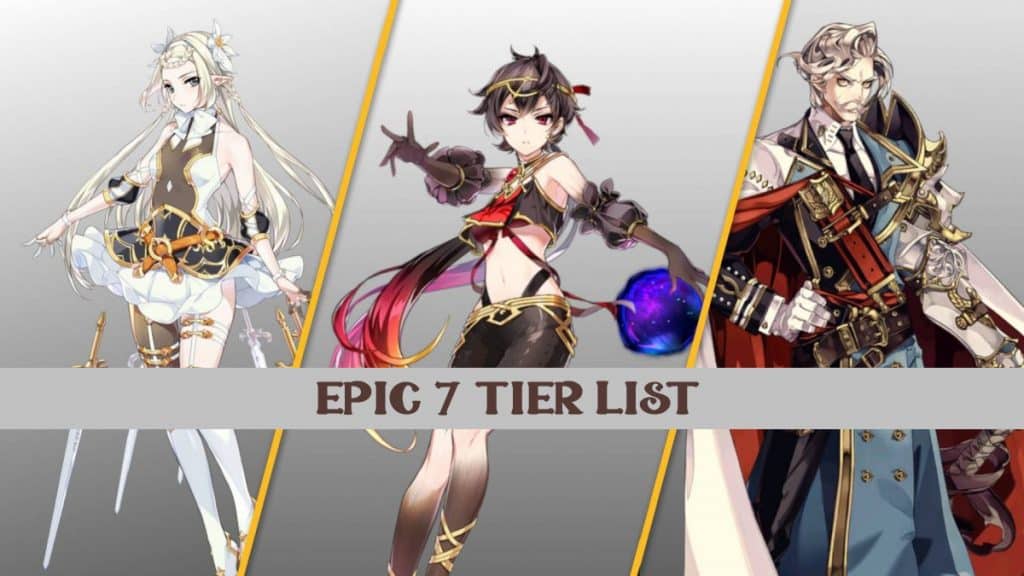 With 6 different gameplay modes and over 200 characters to choose from, it’s easy to wander off in the selection process before the action starts. Just why we’ve compiled the latest Epic 7 tier list possible.

You’ll get your first Epic 7 characters through Selective Summon– but can always re-roll for different ones if you have a change of mind. We’ll walk you through the re-roll process at the end of this article.

Pro Tip: Although you’ll have to start with the Puny-tier characters, it’s best to not invest too much and look for higher-class characters ASAP.

How do you decide which Epic Seven characters are the best?

Well, you can spend hours playing the game, trying out every single Epic Seven character in every different gameplay mode to learn their strengths and weaknesses. Or, go in all guns blazing by following our Epic 7 characters tier list.

We’ll be making changes to this tier list as the game gets content updates, and we have an Epic Seven promo codes article in the works.

So, be sure to re-visit frequently for the latest Epic 7 wiki and updated Epic Seven characters tier list.

Just to see how the game and the characters change, do check out the fan-made Epic Seven Discord tier list.

PvP is just pure chaos because dealing with real players is different from the so-called AI of the video game. The most important thing in PvP is increased damage; but some characters are weak themselves and can weaken others as well, to level the playing field.

The campaign or story mode is fairly simple on Epic Seven but it’s very different from PvP. And that changes the effectiveness of the characters too. While building a strong team for PvE, make sure to have one character of each kind.

Dungeons are fun, aren’t they! And, the developers of Epic Seven decided to make it even more fun by turning one dungeon into an abyss. As you go farther and farther into the dungeon, it gets tricky and difficult, which is only fair because the rewards down there are ludicrous.

But, to tackle the Abyss, you need a solid unit. Here is an Epic Seven tier list for the best Abyss characters.

You can also play Raids mode- it’s a nice change of pace from Story Mode. Although you will have to complete Worlds 5 to 9 in Story Mode to play Raids. It’s a spin-off from the PvE campaign and if you want the best equipment for free, start Raids right now!

The name says it all really. It’s another PvE type game mode where you have to fight and defeat any boss of your choosing. You lose, you go again; you win, you get upgrades and equipment – it’s a win-win.

From PvP to GvG (Guild v Guild), you can build and bid your guild against others to win rewards as a collective unit.

Here’s a helpful guide on Epic Seven Guild Wars, and below is the best Epic Seven hero tier list for Guild Wars.

That’s pretty much it for our tier list of Epic Seven best characters. Feel free to suggest any tier upgrades for your favorite Epic 7 characters and stay tuned for more Epic Seven wiki.