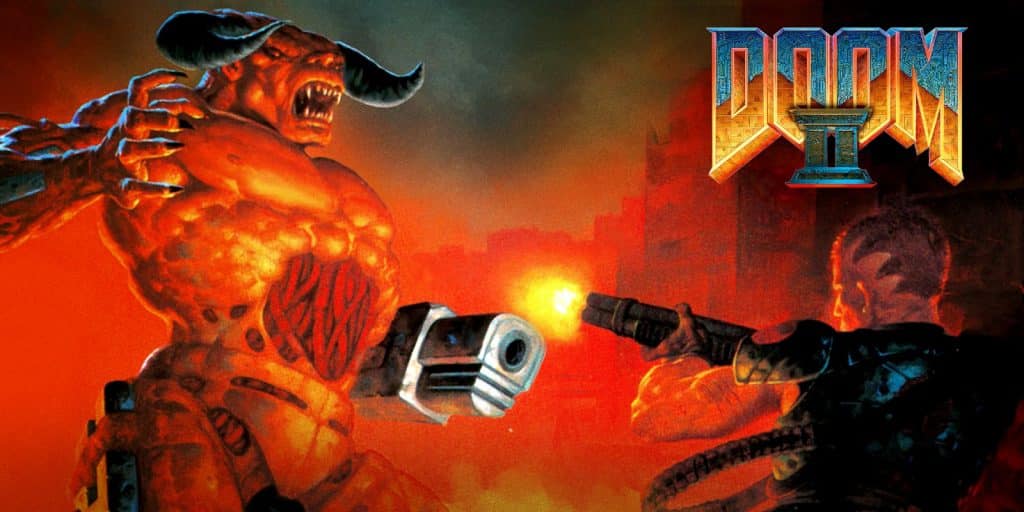 Few video games in the history of video gaming can represent an entire era; whether that be contained within their own industry or otherwise.

While they may provide a fleeting experience or two, the identity of many games was self-contained, and never ventured into the land of pop culture and the lexicon of the general public. Doom II: Hell on Earth is one of the few.

The release date was set as December 10, 1994, and although the original was released to the public as a DOS shareware, John Carmack and ID Software genuinely wanted to move on from that model and it was decided that GT Interactive would publish this glorious sequel to the amazing original, which had put id firmly in the eye of the media.

This kind of attention came with a caveat as Doom II: Hell on Earth was slapped with a mature rating by the ESRB. However, that did not deter the beloved shooter from becoming the best-selling game of 1994 and one of the most critically and commercially acclaimed games of all time.

This Doom 2 review is an ode to a video game that defined video gaming.

Built on the same tech as the first, Doom II was more of an expansion than a full game in the design and mechanic department, and only a sequel in all other rights.

The ID tech 1 engine, which ran 2.5D graphics, was seen as just about enough to keep our zombie headhunting brains sated and to allow the cast to work on their other projects post-launch, despite still carrying the same design limits as the prior entry.

But this retroactively worked in the game’s favor, as the simplicity of Doom II allowed the new consumer base that had been garnered due to the publishing boost to accept the game better and load more hours into it than shells into the Doomguy’s shotgun.

And with the technological advancements that had happened since the prior game’s launch, the dev team instead focused their effort on making levels instead of an episodic format and added more depth and more content for all Doom II levels.

John Romero returned as one of the programmers for the game, while Sandy Petersen designed most of the levels, with help from American McGee.

This led to one of the most iconic moments in video game history, as John Romero stumbled upon an in-joke of himself made by the designers and actually added his own distorted vocals to complete the joke and it was officially added as an Easter egg in the game.

Additionally, the game’s eerie and atmospheric (for the time) soundtrack was composed by Robert Prince, noted for his work at id Software.

To know what style all Doom games represent and how the second iteration transcends self-containment, you just need to start it up, load a new game, land in the first area, go to the left, and pick up. A Goddamn. Chainsaw!

Yep. That’s what Doom is. Since the concept of jumping, free camera movement, vertical design, and RPG elements added to FPSes didn’t exist yet, Doom was the most visceral, bloody, scary, and simplistic linear experience ever.

Once you start to grow your arsenal consisting of the chainsaw, a shotgun, a pistol, a rocket launcher, a chaingun, a plasma gun, the Doomguy’s explosive fists, and of course, the BFG, you would never want to look back.

And Doom II’s level design decidedly never wanted you to look back, literally and figuratively, as each suffocating hallway of carnage led to the next, and the next, and then to the exit, where you ended the level.

Achieving success with this level of constricting linearity is something only the genius of John Carmack and his team could provide, and they provided it in spades.

The usual cast of Hell’s demons is all present here, with Doom II effectively cranking twice the amount and variation of enemies for you to mow down with not a care in the world.

The heavy metal-inspired plot is just as campy and edgy as an Arnold Schwarzenegger and Sylvester Stallone movie combined, balled up and thrown into the oven to mature, and all of the 32 levels in the game have the ability to throw a spanner into your plans if you’re playing at the more punishing difficulties.

Doom II starts right where the original left off, with you assuming the role of the Marine only known as Doomguy. Earth has been invaded by the demons Megadeth keeps screaming about, and countless humans have been massacred. The humans who are left plan to make spaceships to send the survivors into space.

But hey, this is Doom we’re talking about. The plot takes a backseat, humans take a backseat, the setting takes a backseat too; it is just you, the demons, and the sound of your weapon reloads accompanying the slaughter that you are about to lay down.

In many ways, Doom is the extravagant power fantasy that games are labeled with unfairly, managing to own the stereotype of the prey becoming the predator and doing it with style.

This works only for the kind of game that Doom is,  as every weapon in the game serves a purpose, the difficulty is sufficiently scaled, and the polish it carries takes it to 5-star status.

That’s it. Unless you’re from that era when Nintendo DS was royalty, Doom II will leave you, dumb. This is a cult classic, but I’ll be honest in this Doom 2 review and say it’s just not worth it in 2022, again, unless you want to relive the video gaming eras left behind.

Becoming an instant hit upon release, Doom II has maintained its legendary status in the FPS hall of fame. Everything it features became a benchmark for success to all other developers and id Software themselves and said benchmark would only be met fittingly by ID, with the release of Doom in 2016.

So do us a favor, go buy a copy, load up a new game, go left, and grab that chainsaw. You’re welcome.

You can find Doom II for sale on Steam or with an Xbox Game Pass.