Don’t Starve Together Characters: Meekest To The Mightiest 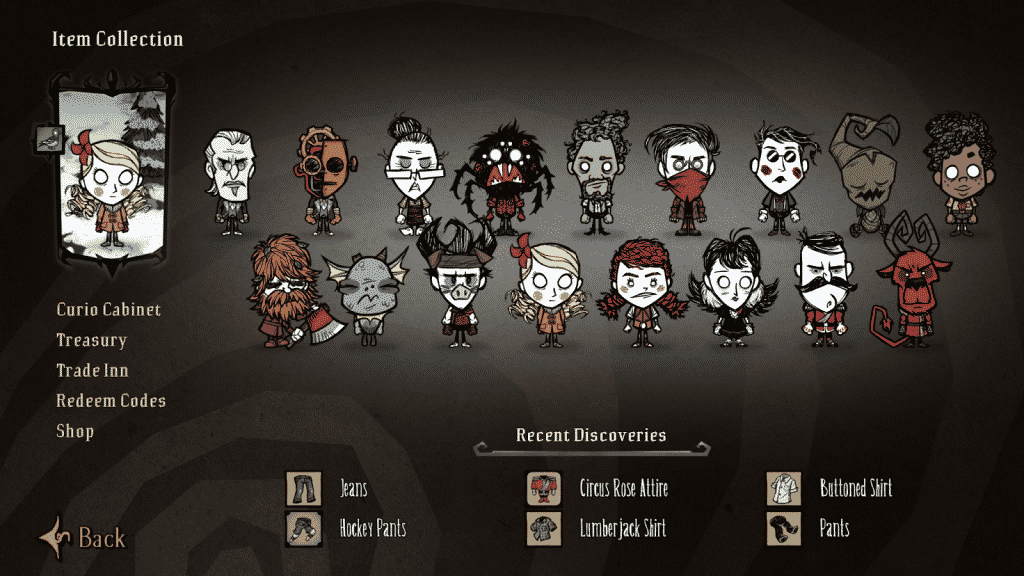 There are a total of 24 characters in Don’t Starve, its DLCs like Reign of Giants, Shipwreck and Hamlet, and Don’t Starve Together (DST). Each has its own perks and narrative.

You start off with Wilson and unlock more characters as you gain experience in the game. There are also 6 characters that are unlocked only through game feats and not by accumulating experience.

In this post, we have collated the stats and perks of Don’t Starve Together characters to give you a glimpse of what to expect from each. You will also learn about the most powerful characters and how to form an effective team.

Here is the list of Don’t Starve characters arranged from the weakest to the strongest. You will also find useful supporting characters in the list that can help heal your whole team.

Perk: Is quite fragile and isn’t capable of taking. But, can inflate a balloon that explodes on taking damage.

Wes isn’t that great of a character. Meek to be precise. Takes damage easily and his stats deplete fast. Can use exploding balloons to distract opponents but noting that raises an eyebrow.

Not a character you’d want to latch on to.

Perk: Can grow a large beard

Wilson is pretty much the default character for Don’t Starve Together. He’s the best character to start your game with, but not with the best stats.

He can grow a beard to survive winter, which gives him 135-second insulation. Still, not the strongest of Don’t Starve Together characters.

Perk: Can build spider-silk beard for warmth and befriend spiders

Webber is a young boy who lives inside a spider that once tried to kill him. As Webber stays inside a spider, he can befriend other spiders and call them for aid throughout The Constant.

However, being a spider, mobs of pigs can be hostile towards him. Webber can also use spider glands and Telltale Hearts to revive players.

Perk: Possess a sentient axe with unlimited durability, which can transform into a Werebeaver

Woodie has a sentient axe named Lucy which constantly talks to him and encourages him to cut down trees. Lucy can cut down trees faster than any ordinary axe and never goes blunt.

Because of this reason, the forest hates Woodie. Also, after eating a totem or during a full moon night Woodie can turn into a Werebeaver, a Weremoose, or a Weregoose.

Maxwell might seem to be one of the weakest DST characters based on his frail health stats. However, he can leverage his sanity and use his Codex Umbra to conure shadow puppets to do his bidding.

He isn’t the strongest character, but you can use him to gather resources. Wickerbottom is the best DST pairing for Maxwell.

Perk: Unlike other Don’t Starve characters it can craft four special items.

Wormwood is a plant creature that can plant seeds without the need of farms and gains sanity from it. However, it loses sanity when plants are killed around it.

Food only fills his stomach but doesn’t heal it. But it can use manure to heal itself. Because of its ability to craft special items it is a valuable DST character.

Perk: Can summon her late sister in fights

Wendy is one of the stronger Don’t Starve Together characters. Primarily because she can conjure her dead sister Abigail. Abigail can do a lot of damage and protects Wendy from enemies.

But in case Abigail dies, Wendy loses quite a lot of sanity.

Wendy isn’t the character to go for if you are trying to defeat a seasonal giant, but great for farming beehives to make bee boxes and for killing spiders.

Perk: Has a lighter and is immune to fire

Willow has a lighter and a teddy bear. Even though she has less sanity, she can slowly increase it by lighting fire around her. She is also impervious to fire.

When Willow goes insane the teddy bear turns large and protects her by warding off beasts.

Perk: Has a four-legged friend and is good with a slingshot

Walter is a little boy scout and the newest character to enter. The Constant. Walter has his pet dog Woby by his side who can turn into a chest and help Walter store goods inside it.

Once you feed Woby five pieces of monster meat, he turns into a mountable ride. He also has a slingshot that lets him avoid melee confrontations. Apart from being allergic to bees, Walter is one of the most interesting Don’t Starve characters.

Perk: Can absorb sanity of fallen

Wigfrid is a born warrior who can deal 25% more damage than your default player. She can absorb the sanity of the dead and is perfect for taking down tough mobs and seasonal giants.

Her only downside is that she is a complete carnivore while berries and fruits are the easiest food items to acquire.

Perk: Has a portable crockpot for cooking special items

Warly is one of the best supporting Don’t Starve Together characters. He spawns with a crockpot and ingredients to cook with. He doesn’t eat anything until it’s cooked.

But the good thing about Warly is his food can help replenish the damage stats of his fellow allies.

Perk: Can make disguises for teammates and befriend merms

Wurt lets you summon Merms. She can ask Merms to help you and has better stats than Webber. She is a vegetarian and meat doesn’t heal her.

Perk: Immune to freezing and stats can be increased by upgrading

WX-78 is one of the coolest Don’t Starve characters. He can eat gears and upgrade his stats. This means over time he’ll be even more capable. He is impervious to cold but takes damage in water or rain.

WX-78 can move at 1.5x speed when struck with lightning.

Perk: Gets stronger when the stomach is full

To describe Wolfgang in a few words, he needs a lot of food and can cause a lot of damage. If you have plenty of food for him, he receives 2x damage stats and a 25%  increase in speed.

However, he is afraid of darkness and monsters. Also, his stats plummet when he is hungry.

Perk: Can make magical books and can craft without the Science Machine

Wickerbottom is one of the most useful DST characters. Due to her immense knowledge, you can make plants immediately, put mods to sleep, and even force lightning at any point.

She is one character that every server wants.

Perk: Can get a free hit from the dark and create her own items

Winona is probably the best team player in terms of dealing with seasonal giants and hound waves. She also has the ability to create unique machines and she can go into the dark once without getting hurt.

Perk: Has excellent time management skills and can craft a watch for teleport

Wanda is one of the best Don’t Starve Together characters. As you don’t get a tutorial to teach the basics of each character playing as Wanda can be a bit tricky initially.

With time she has the power to reverse her aging and stop death itself. Wanda deals more damage as she gets old.

Wortox is a great support character and the easiest to keep alive.

To sum it up, all Don’t Starve Together characters have some unique features to offer. Well, except Wes of course.

Depending on the type of challenge and foes you are up against you have to choose your DST characters accordingly.