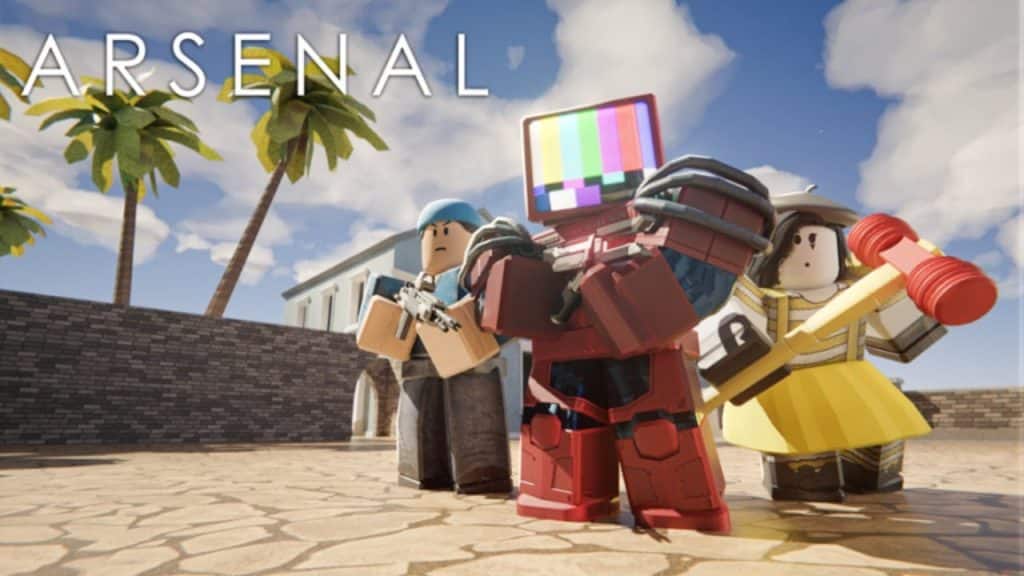 Roblox Arsenal created by ROLVe Community brings us a new addition to the FPS genre, allowing us to experience one of the best and most fulfilling shooter fantasies.

The premise of the game is simple, with each kill players acquire a new weapon, cycling through all of the featured weapons until they gain access to the Golden Knife. Each round ends whenever a player manages to slash one of his opponents with the Golden Knife.

However, for the best Roblox Arsenal experience, you should redeem some Arsenal Codes for free rewards.

This article will show you how to redeem free arsenal Codes and how to enhance your gameplay and customize your favorite weapons and characters in Roblox Arsenal to make your First Person Shooter (FPS) experience more satisfying and create the perfect theme.

What are Arsenal Codes?

Arsenal Codes are given out by ROLVe developers as rewards to players, granting access to free items such as in-game currency or items that can be stored in your locker, which include taunts, skins, melee skins, weapon skins, announcers and kill effects.

They add a new flavor to the game, allowing players to gain an advantage or to customize their characters to fit into a specific theme.

All codes have an expiration date so be sure to redeem them as soon as possible after you acquire them.

Codes are case-sensitive, so make sure to insert them exactly as they appear in order to claim the rewards.

How To Redeem Arsenal Codes

Codes can be accessed in a very easy manner, allowing everyone to benefit from them. To do so follow the instructions below:

Be sure to bookmark our page for any new incoming codes! We update our articles and post all the new upcoming codes for Arsenal every hour.

How To Play Arsenal

Arsenal can be one of the most entertaining roblox FPS games, allowing you to create inventive ways to kill your opponents.

The game features several game modes, each of them presenting different objectives or available weaponry.

The game ends when a player manages to kill a player on the opposing team with the Golden Knife. If a player dies, he will be respawned with the previous weapon that he had, effectively losing one level upon death.

Teamwork and the proper use of cover can make the difference between an easy victory and an overwhelming defeat. Make sure to work closely with your allies and utilize your environment.

Practicing your aim can prove to be one of the ways to ensure that you will help your team achieve victory, you do not want to spray and pray. Constant headshots will be the most satisfying achievement that will showcase your discipline and practice.

Arsenal skins are cosmetic upgrades that you can use to improve your gameplay and create a theme that perfectly suits your character.

Skins can be acquired through the use of codes or through the in-game shop. With each passing day, new skins are added to the shop in exchange for in-game currency.

Skins can also be acquired from crates, some of them having the chance to become unusual skins.

Secret Skins in Arsenal can be acquired by completing various hidden tasks while playing different maps.

One easy way to make sure you can complete all of those tasks is to get yourself a private server.

A notable mention of such Secret Skins would be the Beelzebub Skin and the Mania Skin which can be acquired by finding all the skulls spread throughout the Height Frights map and placing them around the ritual circle.

Arsenal features a variety of game modes that can be accessed by all players, offering endless ways of entertainment.

Those game modes offer a variation of the normal mode, which can range from only using a certain type of weapon to playing entirely new specific maps.

We have compiled a list of all the public available game modes that you can explore in Roblox Arsenal:

When it comes to achieving victory in Roblox Arsenal, players will want to take into account several tips and tricks that will improve their success rate.

We made a list of useful tips and tricks that you should always keep in mind.

For more useful info and extended explanations for Codes, check the Fandom page!