Steam Controller Review (2022): Is it Really That Good? 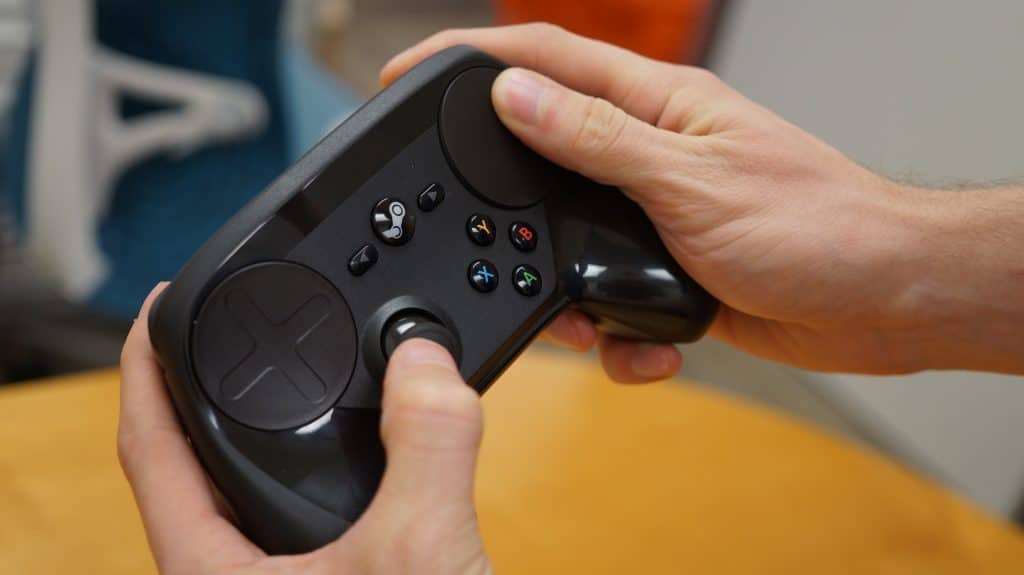 In this Steam Controller review, we’ll be checking this one-of-a-kind gaming controller for everything it stands for, all the myths about it, and whether it will be available again.

Valve designed an all-new controller to allow people a wide variety of PC games. During the prototype development phase, the Steam Controller was supposed to be the jack of all trades. Let’s find out its design aspects, which made it stand out from all other game controllers.

The amount of hardware on this device simply outweighed its competitors. With the added feature of fully customizable control schemes, Valve promoted users to share their favorite mapping among gaming communities.

It helped spread awareness about the best control settings for different games and advertise about the capabilities of this controller.

Design-wise, this is the first device of its kind. Steam Controller is crafted out of plastic with a combination of glossy smooth, and textured portions. Overall build quality doesn’t feel premium because of the glossy plastic, which is a fingerprint magnet.

The Steam controller features a total of 14 button arrangements. It comes with a long list of heavyweight hardware controls.

It is also highly configurable, but in general, these trackpads work as a mouse, while the right trackpads can also be configured to work as a D-pad.

These are angled upwards, which causes a lot of strain on flat thumb-style gaming like in other controllers. For strain-free gaming, the trick is to use the tips of your thumbs and slide them for control.

Next to being the Letter buttons marked X, Y, A, B are quite small as compared with controllers from PS4 and Xbox.

But shoulder buttons on Steam controllers are quite stiff, requiring higher pressure for activation. It protects the gameplay from accidental presses.

On the other hand, trigger buttons have exceptionally low resistance, which seems designed for specific games

Overall, the design and innovations made on this device are unique, but its strength of customization also became a headache for most users. Playing different games and customizing before playing each game was not considered an ideal thing.

While the innovation and intention behind this device were to offer an all-in-one controller. Valve tried to remove the hassle of reconfiguring by allowing configurations to be saved and shared.

Users can browse community shared configurations to eliminate the need to ever create any of their own.

But without having decided the potentially complicated mapping yourself, shared configurations can be completely foreign with a high learning curve. A Steam community layout is often a mystery box of tangled actions, layers, and modes.

Many of the games that can potentially benefit are unable to do so because of the control features. Most games aren’t designed to accept random inputs from different controllers, severely limiting the excellent control schemes.

Good thing is, it’s responsive, using both analog and digital triggers, so there’s a distinctive pull as well as a click at the end.

So analog sticks determine percentage too, including a 100% or full press, similar to the analog sticks on other Xbox controllers.

The hardware of a Steam controller has the potential to do even more, just that the infrastructure doesn’t exist on the game side to actually use it, and there’s a limit to what Steam can enforce by itself.

Even so, the controls offer a lot of utility in gaming because of these features.

Haptic actuators on both sides offer accurate and microsecond feedback for different actions in the game. Haptic feedback helps the player understand the success of a motion or boundaries in gameplay.

With sensors installed on the controllers playing many gyro-specific Steam games and non-steam games, or transforming racing gaming into a gyro-mode offers better control and an awesome gaming experience.

Users will have the option to either connect the Steam controller to the PC or console by using Bluetooth connectivity. As the Steam controller is powered by AA batteries, there is no requirement for an interesting charging cable in the controllers, you can keep playing by changing batteries. Each fully charged battery offers up to 80 hours of gameplay.

For using a Steam controller on wired mode, you receive a one-meter-long USB 2.0 cable that will be required for connecting on consoles or PC.

Steam Controller Review: Is it a Worthy Keyboard-Mouse Substitute?

For console players, the Steam controller feels like almost any other controller, back grip buttons, low latency performance, and a touchy edge with the right touchpad.

Steam Controller Review: Can you use it with consoles?

Cross-compatibility gaming adapters can be used for mapping Steam controllers to different consoles such as PS4, Xbox One, Xbox 360, and a lot of other consoles out there.

CronusMax Plus is the best-selling compatibility adapter available on the market.

The Steam controller was launched in November 2015 with a price of $49.99 in the United States, with shipments slowly being released for the UK and European markets. It was willingly discontinued in 2019, and ever since, they are sometimes openly available on e-commerce websites or used products websites.

With Valve having learned the lesson the hard way with user consensus for its poor build quality and crowdier button layout, it is almost obvious for a Version 2.0 release.

For better or worse, the steam controller is no longer officially available for purchase.

Razer Wolverine is a sleek-looking gaming controller with a similar design. Wired architecture assures the lowest lags while making inputs. You can get this model for around $120.

The Xbox One controller is compatible with all Xbox platforms and Windows 10. You can get this model for just $89 and there are a few better than it right now.

The Steam controller’s definitely made for more than just Steam games and Steam machines. But will it make you a better gamer? With some practice, you might.

The Steam controller experience is certainly more immersive, giving you more control over the gameplay, especially in big picture mode on SteamOS. Valve also made subsequent upgrades to this device, so it will be a surprise to see how Stream Controller 2 comes out.

Why is Steam Controller discontinued?

Steam controllers were under development for a long time and were designed to revolutionize the couch-playing potential of PC games. But after much criticism over its build quality and sub-premium product, Valve finally decided to shut down its experiment. It will be interesting to see if Valve ever decides to launch an upgraded model.

What is the Steam Controller good for?

The primary advantage of the Steam controller was its trackpads and the thought of delivering a keyboard-mouse substitute for gaming. The idea behind this project was truly amazing, but user reception was not as immediate as it perhaps should have been. Today, the Steam controller is one of the most sought-after gaming controllers among true blue gamers.

Will there be a new Steam Controller 2?

While any hope of getting a Steam controller in 2022 is limited to rare auctions, the fact that Valve has patented a new elite game controller is a positive sign. Whatever the release plans may be, it is interesting and exciting to learn about this patent. In a way, it gives affirmation that Steam Controller 2 is underway though. It will be more so fascinating to get any confirmation from Valve or Steam.

Where can I get a Steam Controller?

Getting a Steam controller was a tough nut even during 2015 because of its release in limited countries. In 2022, when the device has already been discontinued you will have a better chance with an offline game store or on Amazon. In case they have extra unsold products, you can get your hands on them.
Another possible way could be searching used devices selling websites. Most e-commerce sellers are already sold out on Steam controllers, or they have delisted the product.
Share. Facebook Twitter Pinterest LinkedIn WhatsApp Reddit