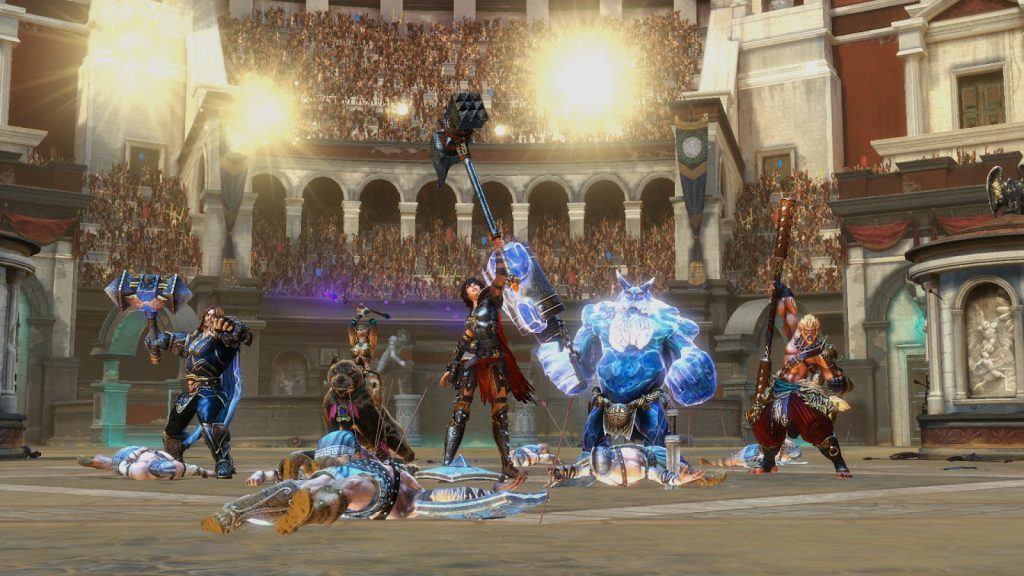 Smite is a brutal third-person multiplayer online battle arena (MOBA) that does things a little different than other traditional MOBAs like DoTA 2, LoL, or Heroes of the Storm.

The major differentiator would be the third-person view, compared to traditional top-down style gameplay. This opens a world of possibilities and makes for one of the most interactive MOBAs I’ve played yet.

To help you keep up with the unending barrage of attacks coming your way, we’ve compiled the best Smite Gods List and Smite Tier List of all the Gods ranked in categories; game modes, and roles ranging from SS-D.

Keeping up with the current meta is essential in games like Smite. Picking the wrong Smite Heroes or “Gods” can hamper consistent progress.

Plus, there will always be a new Smite God, so you gotta know how they rank in the current meta.

One thing to keep in mind before we get into the Smite God list, just because a God is ranked high, doesn’t mean you will instantly be winning matches. A high-tiered God is only as good as you’re able to play it.

Proper understanding of their powers and mechanics, item builds, and overall playstyles will vary from player to player. Pick a God you’re comfortable with rather than one that is just highly ranked in the meta right now.

Tier Lists are ever-changing with new Smite Heroes popping up every couple of months, nerfs, buffs, and updates. So, one God may be powerful in the latest Season but may falter down the road after reworks.

For our tier list, we’ll first rank all Gods from a scale of SS – D, and then according to two game modes and roles.

We’ve also combed through gameplay stats including the highest win/pick rates, most popular Gods, KDAs, and Gods who can build well thanks to the latest updates.

Without further ado, let’s get started!

These Gods are the best of the best in Smite right now.

They’re tiered according to the latest stats including win rates, pick/ban rates, and high KDAs. You can’t go wrong mastering one of these heroes in Season 8 thanks to their overall efficiency.

Adding in the latest item reworks, these Gods also benefit from versatile, powerful builds in the meta right now. Since all this might change very quickly, you should take advantage and devastate opponents with them now.

S-Tier Gods are still very highly ranked, but not quite as versatile or powerful as the SS-Tier Gods. In the right hands, however, these Gods will destroy anyone on the battlefield.

Considering there are 117 Gods, the S-Tier is a well-deserved spot on our Smite Tier List. S-Tier Gods have a greater selection so you can choose from these heroes if you’re missing out on some SS-Tier Gods.

A-Tier Gods are the best of the rest and will be great additions to your arsenal if you can learn them that is.

Gods in this Tier are still great to use and powerful, but if you’re playing against a slightly more skilled S/SS-Tier God, you’ll probably have a hard time.

Meaning, they’re good but not as good as they have been in the past or just lacking in some potential and useful skills.

B-Tier Gods are a slight step down from the A-Tier and have less utility, aren’t as powerful in the meta right now, or just have better counterparts. Many players will still be playing them, but on average, they’re underperforming.

Not the worst tier to choose from, but definitely not the best. If you’re skilled enough, you can go places with some of these Gods. And that’s a big if.

C-Tier Gods are well, definitely not the worst, but they’re almost there. These Gods aren’t as popular in the rotation and don’t have a very good win rate compared to higher-tiered Gods.

Some of the Gods on this Tier have also been in the game for quite a while. I used to main Thanatos when the game was released, so it’s not surprising players find these heroes lackluster by now.

The D-Tier level in our Smite Tier list is some of the hardest to play, most underwhelming Gods in the game right now. If you pick a hero from this list, be prepared to lose some matches and get killed often.

Considering the meta, you’re just not competing on the same level as higher-tiered Gods if you pick from these heroes. Builds aren’t as powerful as they used to be and you’ll be outmatched by even a new player with a S/A-Tiered Gods.

Now that we’ve gone through our Smite Tier List, we’ll be showcasing the best Gods in various game modes and roles. This makes it easier to understand which/what kind of Gods to pick in-game and can make all the difference.

We’ll also be going over why some of these Gods are ranked where they are so you can get a better understanding of what they have to offer.

For both of the game modes we’re ranking, we can see a few similarities in the top-tiered Gods. Mainly these are Khepri, Geb, and Bastet. Unsurprising considering the latest reworks have buffed up these three Gods in particular.

But you can’t go wrong with all of the heroes featured in our Smite Arena Tier List. Depending on the situation, you can choose from these characters for different roles. Here’s what some of these Gods have to offer:

Khepri is a tanky support God with great Crowd Control (CC) skills. Players using Khepri will more than likely be initiating a lot of fights and will be able to stay in them as well. Khepri also excels at getting assists, but the downfall is a lack of kills because of his low damage.

Since Khepri is more geared to a Support role, you should be fine as long as you play accordingly. Khepri’s ultimate is also very useful in team fights as he can revive allies and increase movement speed/removing CCs for quick getaways.

Atlas is one of the latest Gods to be released in Smite 8.12. And since he is a new Smite God, it means that according to the meta, he’ll rank highly for a while. So far, we’ve seen that Atlas is faring well in ‌Arena mode, but not anywhere else.

This is because Atlas is a new God and will take some time to reflect on how he fits into the meta. But his skills are still worth trying in a match or two.

Atlas has great Crowd Control (CC) capabilities and has abilities that will be useful in both offense and defense. But where he lacks is in his damage as it’s lower compared to other Gods.

For the Clash game mode, we can see players using similar Gods from the Arena. This just speaks to their dominance in Smite right now and why we’ve seen them so often in our Smite Tier List.

Here’s what both Geb and Bastet have to offer players:

Geb is another highly-sought after hero thanks to its powerful defensive capabilities, CCs, skills, and mobility. Geb’s passive is pretty overpowered as it cuts out 75% of critical strike damage, which is almost impenetrable by the end-game.

All of this makes Geb one of the best Gods in Smite in Season 8. But the early game is the toughest for Geb players, so be wary of that. Geb also lacks some protection that you’d normally see on other Gods.

Bastet is among the most powerful and is one of the most played Gods in Smite thanks to recent buffs to her skills and stats. She’s most suited for solo kills and farming jungle spawns thanks to her Pounce ability.

You can initiate a fight, do some massive damage, and jump out of the fight very easily. High damage for both skills and basic attacks with great mobility makes Bastet well suited to chasing down enemies.

But she’s very squishy and can be killed often if you get caught out alone.

Below we’ve compiled a Smite Tier list of the best Gods in various roles. This will give you a better idea of the current meta in each role. With these recommendations, it’ll make picking a hero in Conquest much easier and will also help with team composition.

You’ll notice some of the Gods in the Tier list will come up in more than one role, and this is because they’re versatile. Smite is a game where you need to adapt to the situation and these Gods excel in those cases.

For specifics on all of the Gods, their abilities, lore, stats, and more, check out their pages on the Smite Wiki.

We’ve come to the end of our Smite Tier List and hopefully, you’ve gained some insight into the current Smite meta.

Since there are so many Gods in Smite, it can be overwhelming to pick just one. Watch some videos, check out other Gods in the same role/archetype, and you’ll be okay.

The best advice I can give is to find the type of character you’re comfortable with and excel at it.

But you’re not going to play your preferred role in every game, so it’s a good idea to have a roster of Gods you’re comfortable playing with. This will help make you a well-rounded player who’ll be useful to the team.

Smite may be one of the most infuriating MOBAs to play, but when it works, it’s oh so worth it.