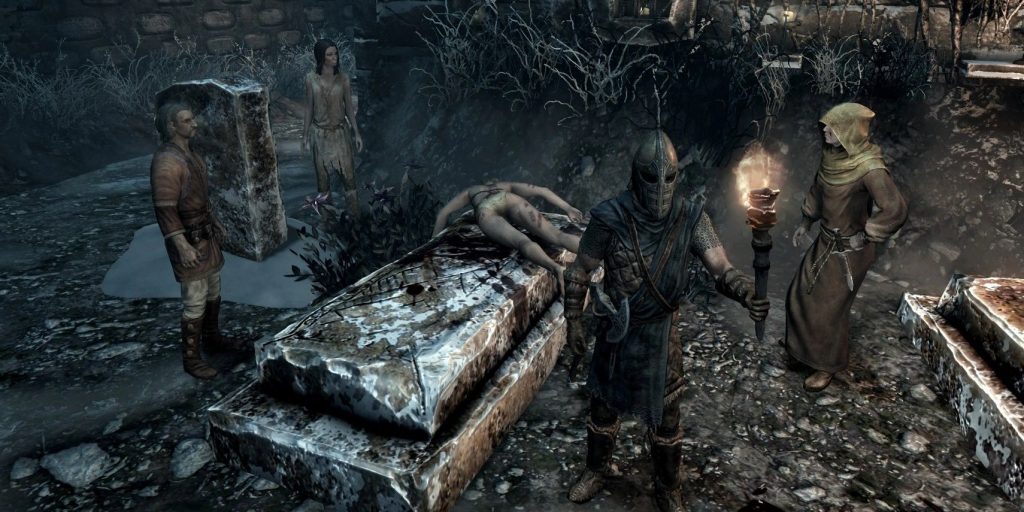 One of the best RPGs of all time and the fifth offering in the Elder Scrolls franchise, Skyrim is absolutely chock full of items, missions, creatures, and surprises at every corner, strewn across its vast medieval lands.

Each city, valley, and mountain has its own secret, and if you listen carefully, you might learn something.

An interesting venture is the murder mystery quest you have to solve in Windhelm. A lot of players have been facing problems with Skyrim Blood on the Ice quest, complaining of bugs or getting stuck at a certain point.

So, naturally, we had to come up with a solution for you guys.

This is a full walkthrough of Skyrim Blood On The Ice quest, how to prepare, what will you need, and how to finish it off!

Skyrim Blood on the Ice Walkthrough

According to the game’s official wiki, we begin this tale in the icy corners of Windhelm.

Before you even begin the Skyrim Blood on the Ice quest, the game will require you to visit the city of Windhelm. After a certain number of visits, you’ll encounter the crime scene on your lucky day.

Additionally, two characters named Tova Shatter-Shield and Arrivanya must still be alive. Finally, you must enter the city between 7 pm and 7 am, as the supposed killer only strikes at night.

If you don’t meet any of those requirements, you can simply purchase or pick the Master lock of a house in the city of Windhelm called Hjerim, enter, and see the pamphlet called ‘Beware the Butcher!’ and start the Blood on the Ice quest from there.

In the graveyard of the city of Windhelm, you will encounter the scene of a grisly murder, and a few guards surrounding the corpse. A young woman has been killed, and it is up to you to gather more information about the butcher in Skyrim.

One of the guards will tell you that this is actually the third murder that has happened in the same way; a young woman has been killed and left on display.

The victim, as you learn, is Susanna- a young barmaid of the Candlehearth Hall. You get whatever little information you can, and are advised to approach Jorleif, the Castle Steward, for more clues and information about the culprit.

Later, the guards will leave, and you can come back and examine the crime scene. But the body isn’t there, you will have to track it down to the Hall of the Dead, to where it has been carried. Look for the trail of blood and it will lead you there.

After questioning and enlisting the help of Jorleif’s men, you can either go back to Tova and ask for the master key to Hjerim to enter it or pick the lock.

Once inside, you will need to investigate for clues until you come across the pamphlet mentioned above, as well as the killer’s journal, where he describes his experience with his victims and what he intended to do.

While searching, you will find that one of the wardrobes opens up to a secret chamber in the house.

Enter it, and it will lead to a room strewn with bones and another gruesome crime scene where some sort of an altar has been set up, where you will find the second journal.

This details a bloody recipe for necromancy. Be sure to grab the strange amulet from a shelf nearby.

Back to the Castle

After you report back to Jorleif, you ask him about the Butcher, referred to in the pamphlet.

Ask him about the amulet, and he will advise you to go to Calixto, a trinket collector who might have more information about the source of the amulet.

On your way, you might come across Viola Giordano, the source of the pamphlet. Ask her about the Butcher, and she proposes Wuunferth, a court mage, as the supposed killer.

And since there have been rumors surrounding him for years, it makes him the perfect suspect.

Calixto, on the other hand, is available at his House of Curiosities, a strange museum he built with his sister, who has since passed on. This house is full of the treasures that they had found together, he says. For a small fee, Calixto will show you around his house.

If you show him the amulet, he will tell you that it is a Wheelstone, usually in the possession of court mages, such as, you guessed it, Wuunferth.

Before you move on, Calixto will offer to buy the amulet from you, and since you have no use for it anymore, it is advisable to sell it to him for 500 gold, otherwise, the amulet is stuck in your possession causing the so-called Blood on the Ice bug.

This bug is the reason most players find Blood on the Ice stuck in Skyrim.

With all of your evidence now pointing firmly towards the court mage Wuunferth, you can approach either Jorleif or the mage to confront him directly.

If you choose to approach Jorleif, Wuunferth gets arrested, and the case is closed abruptly. The court mage will refuse to talk to you, leaving you in a bind as to what to do next.

Turns out, the court mage was never the problem, as the murders keep happening regardless of whether or not Wuunferth was arrested. You are berated by the local law enforcement for this massive error and chided by Wuunferth for not believing him.

At this point, you can ask Wuunferth about the amulet, and he will reveal that it is a Necromancer Amulet, and not a Wheelstone, as Calixto had you believe earlier.

Interestingly enough, Wuunferth has studied the pattern of the murders as well and advises you to go to the Stone Quarters and patrol them at night if you wish to catch the real killer.

You actually have another option. If you confront Wuunferth directly with the allegations against him instead of getting him arrested, he will get offended at first but will give you an answer, deducing the same about the amulet and the murderer’s pattern.

To Catch a Killer

Acting on the court mage’s advice, you can go to the Stone Quarters at night.

True to style, the killer makes an appearance, after which you will be required to follow him all through the town, then the graveyard, and then the market.

At this point, you will realize that the true killer is none other than the trinket collector himself, Calixto.

His next victim will either be Arivanya, provided that she is alive, or another unlucky young woman.

If you make it in time, you will be able to stop the grisly murder, with Calixto then running off into the night with you in tow.

He will eventually make his way to Hjerim, and right into his Necromancy chamber. Taking Calixto down is not particularly hard since he wears no armor or puts up much of a fight.

After he has been dealt with, you can recover the Necromancy Amulet and his key. For solving the serial killings, Jorleif and his men will always remember and praise you whenever you pass them by or visit the city.

Now, the only thing that remains is the killer’s motivation; why did he undertake such bloodcurdling acts?

Turns out that Calixto was trying to bring back the sister he lost ages ago, the one that he talked about so fondly to you. And his intention, as you will read in his final journal, was to perform a pagan ritual involving killing young women to bring his deceased sister back.

This is not much help, and although you cannot prevent lives from being lost in the past, at least Windhelm is safe for the future.

The level and quest design of Skyrim is a testament to how far video games have come, how much depth they now possess. And in an age where most AAA titles will have you run through the same corridors, dealing with the same enemies time and time again, Bethesda had you solving a murder mystery in a high fantasy RPG game with dragons.

Skyrim’s Blood on the Ice quest is one of the more memorable quests, not only for the content but also for the way it is presented. And if you are stuck anywhere, you can always come back and check this Blood on the Ice walkthrough.

How do you start Skyrim Blood on the Ice?

The quest has a counter for the times you have visited Windhelm. Once that counter reaches 4, you will be able to encounter a crime scene, where you can begin the Blood on the Ice quest.

How do you trigger Blood on the Ice if Nilsine is dead?

If you happen to kill Nilsine Shatter-Shield to reap the benefits of the Mourning Never Comes quest, then you can find Tova Shatter-Shield dead inside Hjerim and activate Skyrim Blood on the Ice quest from there.
Share. Facebook Twitter Pinterest LinkedIn WhatsApp Reddit 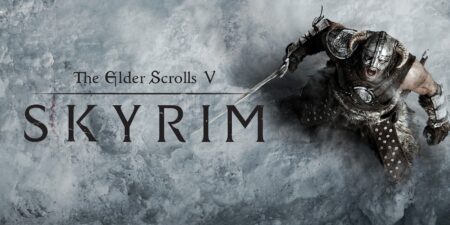 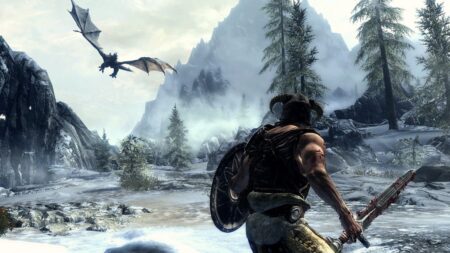 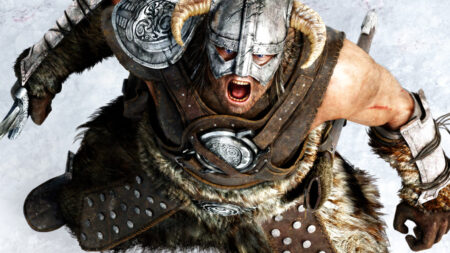 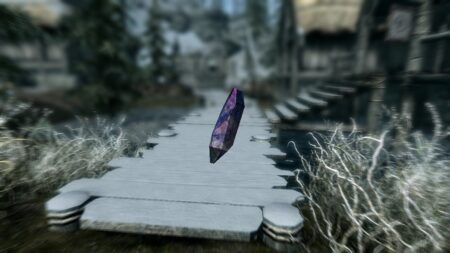