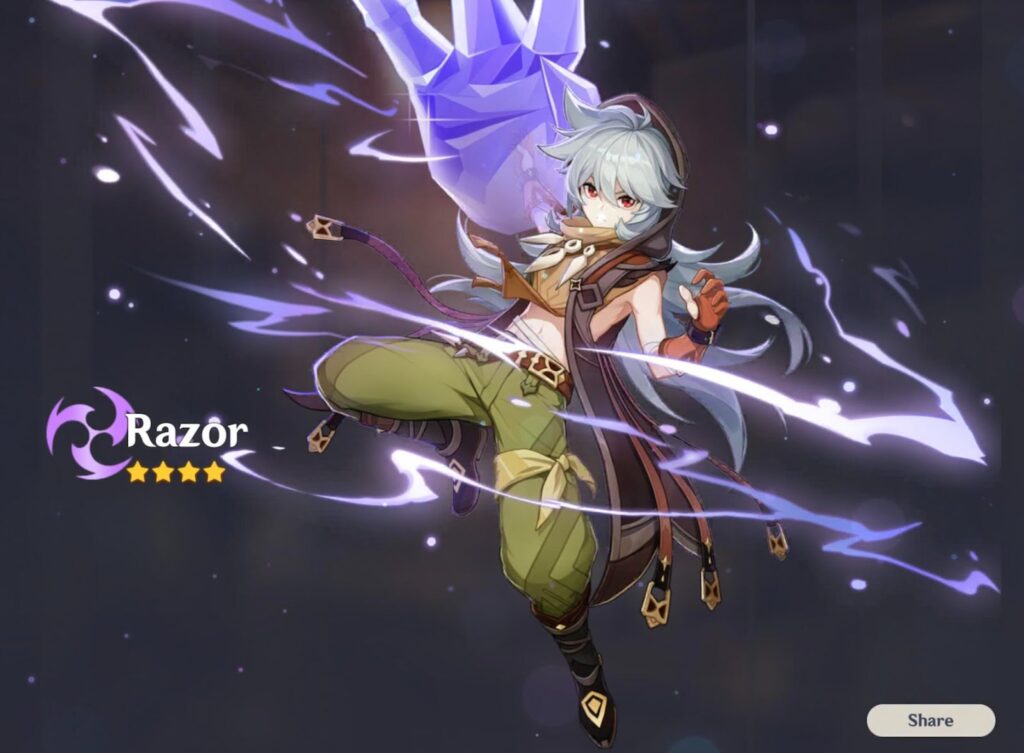 “Wolvendom guy! Looks a little on the feral side… doesn’t talk much… but he’s alright! We both love eating meat, so we got that in common. I sometimes cook some meat for him, and he teaches me how wolves communicate in return. Haha! You should join us next time!”

Razor is a boy with unknown origins who currently resides in Wolvendom. This Claymore-wielding Electro user is brought up by the Wolf of the North, Andrius, and has several scars to show for his rough life with the pack.

After meeting Varka, the Grand Master of Knights of Favonius, Razor was put under the supervision of Lisa, who taught him the use of his Electro vision.

How To Unlock Razor in Genshin Impact

As Razor is a 4-star character, he isn’t limited to a specific time and can be gotten by wishing on banners. There are a bunch of methods you can get Razor:

By wishing on the Standard Banner Wanderlust Invocation players have a chance to get Razor out of multiple 4-stars.

You can occasionally get Razor from Paimon’s store by spending Masterless Starglitter.

He is often featured as a 4-star character in limited-time banners, and chances to obtain him are boosted.

Razor’s Normal attacks can perform up to 4 consecutive strikes with his claymore. He can use up stamina to perform spinning attacks against opponents. He can also perform an aerial plunging attack dealing AoE damage.

Razor’s Elemental Burst summons the Wolf Within, which will fight alongside Razor for the skill’s duration. The Wolf Within increases Razor’s ATK SPD, Electro RES, and deals Electro DMG.

Note that the skill is only effective as long as Razor is on the field.

This 2nd Ascension Passive will increase Razor’s Energy Recharge by 30% when his health is below 50%.

Razor’s Utility Passive decreases the sprinting Stamina consumption for the entire party by 20%.

Every Elemental Orb or Particle Razor picks up increases Razor’s DMG by 10% for 8s.

Increases Razor’s CRIT Rate by 10% against enemies with less than 30% HP.

Increases the Elemental Burst level by 3 up to a max of 15.

When Razor casts his Elemental Skill, enemies will have their DEF decreased by 15% for 7s.

Increases the Level of Elemental Skill by 3 up to a max of 15.

Every 10s Razor’s claymore deals 100% of his physical ATK as Electro DMG. When Razor is not using his Elemental Burst, a lightning strike on an opponent will grant Razor an Electro Sigil for his Elemental Skill.

Song of Broken Pines is a 5-star banner exclusive weapon. When equipped, its main stat gives Razor bonus Physical DMG, and the main stat increases ATK. This weapon’s skill increases ATK by 16%. On hit, the weapon produces Sigils which will be consumed, increasing the Normal and Charged Attacks’ ATK SPD by 12% and ATK by 20% for 12 seconds.

Serpent Spine is a good 4-star alternative. Players can get it by buying the Battle Pass. When equipped, Razor will deal 6% more DMG and take 3% more DMG every 4s.

This effect can be stacked a maximum of 5 times. The stacks will be reduced by 1 when Razor takes DMG.

You can see how well these pair with Razor, whose focus is stacking on as much Physical DMG as possible.

There are several teams that Razor can contribute to in triggering Elemental Reactions or serving as the Main DPS. Some of these teams are –

Razor’s best build has him serve the role of a Physical Main DPS. Here is what you need to do to play with him effectively.

The best weapon for this build is the Song of Broken Pines, with the Serpent Spine being a good 4-star alternative.

The best artifact set for this build is the 4-piece Pale Flame to increase Razor’s Physical damage.

How old is Razor?

How Tall is Razor?

That is all for the Razor guide. We hope it will help build Razor using different Artifacts, Weapons, and Teams. Razor is one of the early 4-stars, and as a part of the Story Quest, along with his powerful Physical DPS potential, he instantly became a fan favorite.

Check out our build-up to Genshin Impact 3.4 update!