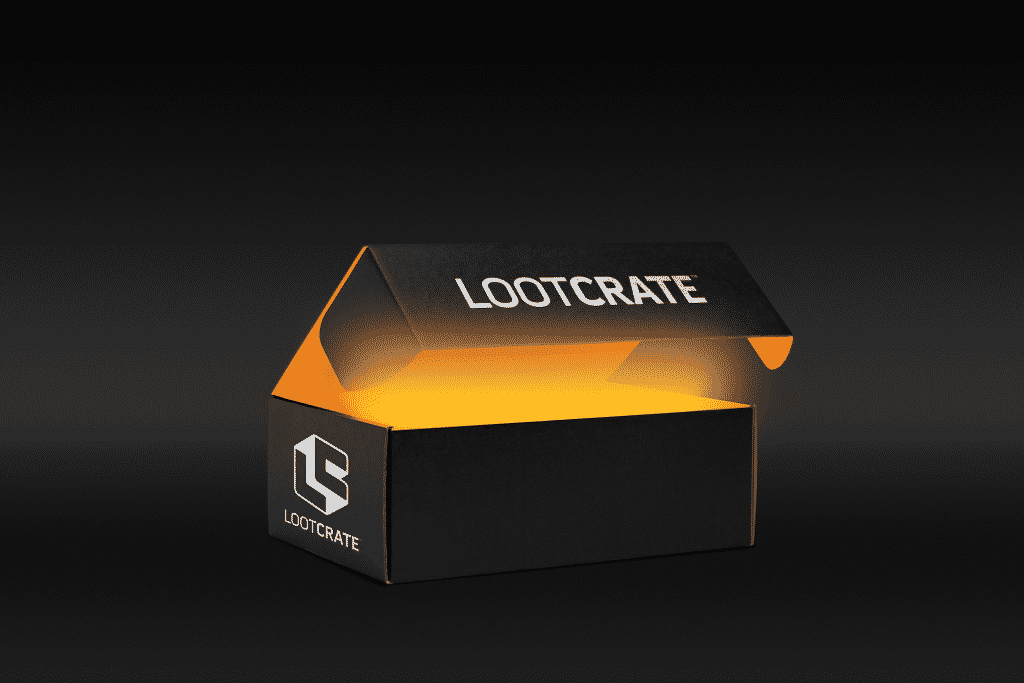 I don’t know many gamers who like loot boxes/ loot crates in games. They’re a money-grabbing blight on the modern gaming space that is pretty much universally hated. They’re the unholy child of gambling and micro-transactions.

You would think then that basing your whole business around real-world loot boxes and then naming it lootcrate.com would be a bad idea then.

Gamers, nerds, geeks, enthusiasts. Whatever you call us one fact is true, we’re pretty easily separated from our money.

So Loot Crate throws some random merchandise into a crate every month and you pay for it. Maybe you’ll get some awesome stuff you love, maybe not. That’s the risk.

But is it worth the risk? Read our loot crate review to find out.

Loot Crate review: What is it and how does it work?

A Loot Crate is basically a box of random merchandise that can include:

If you leave it too late to cancel you could end up paying for a box you don’t want.

If you opted for a monthly box there’s also the nifty option to skip a box. This is great if like me you’re sometimes away from home for extended periods.

What Loot Crate options are there?

Ok, so we’re going to talk about the subscription boxes first. This is because it’s Loot Crate’s main business model and most likely the option you’ll be looking at.

It can be hard to know exactly what kind of stuff you could get. They’re pretty cagey on Loot Crate’s past crates.

There are currently 5 categories to choose from and each one has a range of options:

Loot Crate will set you back just under $25 per month and you’ll get 3+ items. Loot Crate DX is the deluxe version and will cost you around $50 a month for 3-5 “premium” items. Premium seems to mean bigger/ better figurines, cool clothes, etc.

These are probably the two riskiest Loot Crate options.  The Merchandise/ gear you get from these boxes can be from pretty much any niche of fandom.

It could be film-inspired anime or gaming. It could well be from some franchise you’ve never heard of. So probably only go for these boxes if you have pretty broad interests or just like collecting cool bits and bobs.

These are slightly safer options as you at least have a rough idea of the niche your merch will be coming from. With these special boxes, Loot Crate also tends to tell you the coolest stuff you can get.

This pretty much does what it says on the tin. The Loot Crates are far more niche which is both positive and negative depending on who you are.

These boxes tend to rotate in and out of service. As of now, there are 5 options. 3 are relatively general: Harry Potter, Marvel, and WWE.

2 are fairly niche, Deadpool and Firefly.

The Pro here is that you’re taking less of a risk. Only want Harry Potter gear every month? Great pick that box and you can be sure everything you get matches your interests!

This should cut down on the chances of you paying for something you don’t want.

The cons are that it can get pretty niche. I’m a huge Deadpool fan but I’m not sure I need a box full of Deadpool delivered to my house every 3 months.

Likewise with Firefly. It’s a great show but how much quality merchandise can there be out there?

With these boxes, you run the risk of getting merchandise based on properties you love but the merchandise being of lower quality or repetitive.

The Animation box is mainly aimed at Anime fans so sorry Pixar/ Dreamworks lovers, we’re not talking about that kind of animation.

Again the cool thing about these options is they are great if you’re predominantly an anime fan and only want merch from your fav animes.

As of writing, there are 5 options with 3 being relatively varied and 2 being once again more niche.

First, the Loot Anime crate is the most general and covers loads of different anime.

The second is Anime Fury. This is for the action fans so you can expect merch from shows like My Hero Academia, Bleach, and Demon Hunter. If you predominantly watch these kinds of anime it’s probably a better option than the Loot Anime crate.

The third is the Crunchyroll crate which covers any anime produced by Crunchyroll so lots of great options.

The last 2 options are Hello Kitty and Rick and Morty. With both crates being tied to individual shows you know pretty much exactly what you’re getting.

Loot crates for the gamers out there.  This time there are 4 choices.

Loot Gaming is the most general box. If you’re a gamer who loves lots of different games this is probably the box for you. You can get merch from a huge range of games.

Of course, this means you also run the risk of getting merch for a game you hated/don’t care about.

There are also Destiny, Elder Scrolls, and Fallout options. These crates only feature merch from their respective niches. Fallout has such cool lore I can see the appeal of getting Fallout merch every month.

However, the Destiny crate seems a little more limited. How much good merch can there be out there for a game that’s become a bit of a flop?

If you’re out and proud as a geek these boxers are a pretty cool option. There are currently 5 options: Loot socks, Loot Tees, Loot Underwear, Loot wearables, and Loot for Her.

They’re all pretty self-explanatory. For each one, you’ll get a random piece of that type of clothing each month.

These are the cheapest Loot Crate provides and are great if you just want something a little different to wear each month. They also make pretty cool gift ideas for a geeky partner, sibling, or child.

Lootcrate also offers a range of one-off limited edition boxes. They rotate in and out pretty often so I’m not going to waste time going through them individually. They do get incredibly niche, however. For example, one current option is a $50 Home Alone crate.

These boxes tend to be a little bit more expensive than the monthly boxes but you have a better chance of getting high-quality gear from them.

There are also artist crates that include merch from a specific celebrity. These also rotate in and out but current options include Britney Spears, My Chemical Romance, and Mariah Carey.

I don’t know many geeky Mariah Carey superfans but I guess there are some out there. These would probably make for good gift ideas.

Finally, the last type of Limited Edition Box is Capsule Collections. These are one-off boxes from a range of different franchises ( DC, Marve, Doom, etc) and they feature exclusive clothing, mainly T-Shirts.

Verdict: Is Loot Crate worth it?

However, I have quite a few caveats.

Subscribing to Loot Crate is A LOT like gambling. You have no idea what you’re going to get. It made writing this review difficult.

Just because I get a box of cool stuff doesn’t mean you won’t get a box of duds. And if you check out review boards online lots of people seem to be getting duds. This is a pretty common sight:

This brings me to my next point- the quality of some of the merchandise. If you visit the site, Loot Crate is pretty mean with details on the type of stuff you’re going to get.

For each type of box, they only show you the coolest stuff you MIGHT get. They don’t mention that after a year you could end up with a draw full of Deadpool keychains and bottle openers you never use.

You could end up with a draw full of stuff like this:

The more niche boxes seem like a safer option. At least you can be more sure you’ll get something from a franchise you’re interested in. However, some are so niche I’d be worried about how much quality merch there is out there for them.

Value for money is also a concern. Loot Crate tends to value crates at around $15 more than they’re charging. So great value right?

Just remember that since a lot of the merch is Loot Crate exclusive they’re essentially pricing it themselves. If I hand you a rock and say it’s worth $50 but I’m only charging $35 that doesn’t mean you’re saving $15.

Typically I think you can expect one item that feels worth it sprinkled in with some inexpensive trinkets.

If you’re curious what kind of loot you might have, I suggest using the build-a-crate option to see what kind of things you might end up getting before you sign up. This is the closest to a Loot Crate spoiler you’re likely to find.

So if you have disposable income and can afford one more subscription service Loot Crate could be worth it. It’s a cool premise and some of their loot is pretty nice.

Just try to remember that it’s a MYSTERY BOX and you’re taking a gamble. So if you end up disappointed you’ll only really have yourself to blame. That’s all for our loot crate review.

What usually comes in a loot crate?

Well, the whole point of Loot Crate is that you’re not meant to know exactly what you’ll get. To be fair, Loot Crate is about as forthcoming as it can be without ruining the surprise.

Depending on the crate you choose you’ll normally get 3-5 or maybe 3-10 random items associated with the type of box you choose. These are normally clothing, figurines, wearables, comics, utility, household items, or pins.

How long does it take a loot crate to ship?

That depends! The subscription model is mainly monthly but some of the more niche boxes are every 3 months. You can check out this handy page.

However! I’ve read a lot of complaints online of people saying they’ve been waiting up to 3 months for their crates. Loot Crate is blaming this on Covid.

How do I get a refund from Loot Crate?

You don’t. In the same way, you don’t get a refund from a poker table or slot machine.

If you get clothing and it’s the wrong size, you MIGHT be able to swap it for something that fits. But that depends on supply and “service agent discretion”. So don’t hold your breath.

Likewise, you might get a replacement item if something arrives broken. Or maybe not. Again it’s down to agent discretion.

How much does Loot Crate cost a month?

That depends on the subscription you choose.

The cheapest Loot Crate is $10 for 2 pairs of socks a month. Most standard crates cost between $25- $40 a month. Some more niche crates are around $50 and come every three months.

Can I buy just one loot crate?

You can! Their main model is subscriptions but there are ways around this.