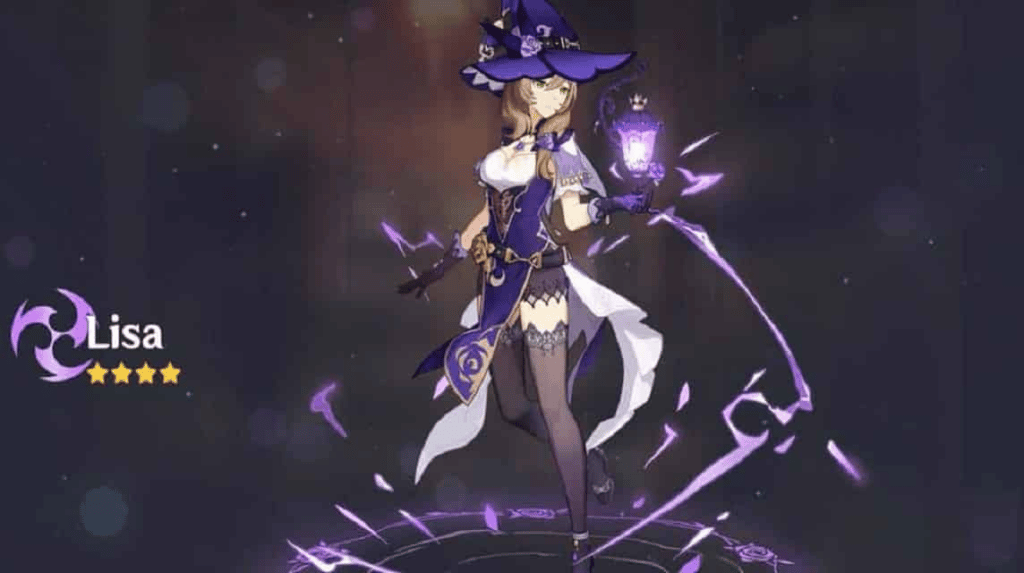 The Nation of Sumeru recognizes Lisa as their most accomplished graduate in the past 2 centuries with Genshin Impact. She is a highly knowledgeable mage, currently serving the humble position of a librarian in Mondstadt with the Knights of Favonius for unknown reasons.

Lisa is a 4-star Electro Catalyst user who can provide powerful Electro support and sub-DPS capabilities. She is calm, collected, and somewhat lazy, which also shows in her combat style. However, Lisa is also extremely serious about her librarian duties and remains diligent.

While not one of the strongest characters, Lisa has remained a fan favorite since the start of the game due to her personality and design.

How To Unlock Lisa in Genshin Impact

Lisa is one of the first Free-To-Play characters given to most players at the start of the game. To unlock her, you simply have to complete one of the early story quests, Sparks Amongst the Pages, which you unlock when you first visit Mondstadt.

Lisa does not normally appear in the Event Banners, meaning you must wish on the Standard Banner to get her. The Standard Banner is always available, but this can be quite difficult due to the large character pool.

Lisa can also be purchased from the Starglitter Exchange and has been made available in Paimon’s Bargains 5 times till now.

Lisa’s Normal attacks have her cast 4 rapid lightning strikes to enemies dealing Electro damage. She can also charge this up for a powerful AoE Electro attack that costs some Stamina. Her plunging attack deals AoE Electro damage to all unfortunate enough to be in her path.

This is Lisa’s Elemental Skill which has 2 types of usages, tap and hold. Tapping the skill unleashes a few lightning orbs that deal AoE Electro damage in a small area. Holding the skill makes Lisa charge up a lightning storm in a circular radius around her and deals significant AoE Electro damage. The skill damage increases with the Conductive stacks from her passive.

Lisa’s Elemental Burst has her summon a lightning lantern that assaults enemies with powerful Electro strikes in a circular radius and also launches them backward for the duration of the skill.

Opponents hit by her Elemental Skill will have their Defense decreased by 15% for 10 seconds.

Crafting potions with Lisa has a 20% chance to return some of the material used in making the potion.

When you hold Lisa’s Elemental Skill, every enemy hit will generate 2 Energy up to a maximum of 10 Energy.

Lisa’s Elemental Burst Level is increased by 3 up to a maximum of 15.

Lisa’s Elemental Skill Level is increased by 3 up to a maximum of 15.

Whenever you swap to Lisa, she will apply 3 stacks of Conductive to nearby enemies, and this effect can be used every 5 seconds.

This 5-star Catalyst is the signature weapon for Yae Miko, but it can also be used on many other characters due to how strong it is. The weapon has a powerful Crit DMG sub-stat, but the Elemental Mastery increase from its Weapon Skill is where it really shines.

The Skyward Atlas is another 5-star option that is excellent for increasing Lisa’s damage output. Not only does it increase her ATK%, but the Weapon Skill increases Elemental DMG by 12% and also triggers highly damaging projectiles every 30 seconds.

The Widsith (Free To Play Choice)

This is one of the best free-to-play options available for Lisa in the game. It has a rare and powerful Crit DMG bonus which can be devastating when paired with the right Crit Rate artifacts.

This is an excellent set for any character looking to increase their Energy Recharge and Elemental Burst damage.

The Gilded Dreams set provides Lisa with all the Elemental Mastery she needs for her Electro attacks and Elemental Reactions to pack a punch.

This set is based around increasing your Electro damage as much as possible and is perfect for a Lisa build focused on causing mayhem with Electro-based Elemental Reactions that use her Skill.

Lisa can serve as your main source of Electro application in a variety of different teams. Most teams make use of Lisa as either a Sub-DPS or an Electro Support.

Here are some of the most popular teams with Lisa in them:

Lisa has 2 fairly popular builds as mentioned before one focused on Lisa’s own damage and the other on bolstering your team’s Elemental Reactions.

For this build, the weapon you should use is The Widsith or Kagura’s Verity as they will greatly boost your Elemental Skill damage.

The Artifact set that goes best with this build is the Emblem of Severed Fate or Thundering Fury.

The Electro reaction build focuses on maximizing Lisa’s Elemental Mastery and increasing her Electro Reaction damage potential. With the introduction of Dendro, this build has become more relevant than ever, as Electro reactions are currently some of the strongest in the game.

You should use the Widsith or Kagura’s Verity with this build. Any Energy Recharge or Elemental Mastery buffing Catalyst will also serve you well.

The Gilded Dreams set will be the best Artifact set for this build due to its strong Elemental Mastery buffs.

That should be all you need to know about Lisa in Genshin Impact. While not considered powerful or meta-relevant for quite a while, fans have still remained committed to her character, and it has started paying off with the latest updates.

What is Lisa’s favorite flower?

Players will be given the option to choose a flower for Lisa during her Story Quest. If you talk to the flower shop owner Flora, she will tell you Lisa’s favorite flower is the Cecilia. You can purchase it or pick one from Starsnatch Cliff.

How old is Lisa?

While Lisa’s exact age is unknown, she is speculated to be between 28 and 32 years old, according to some in-game dialogue.

How tall is Lisa?