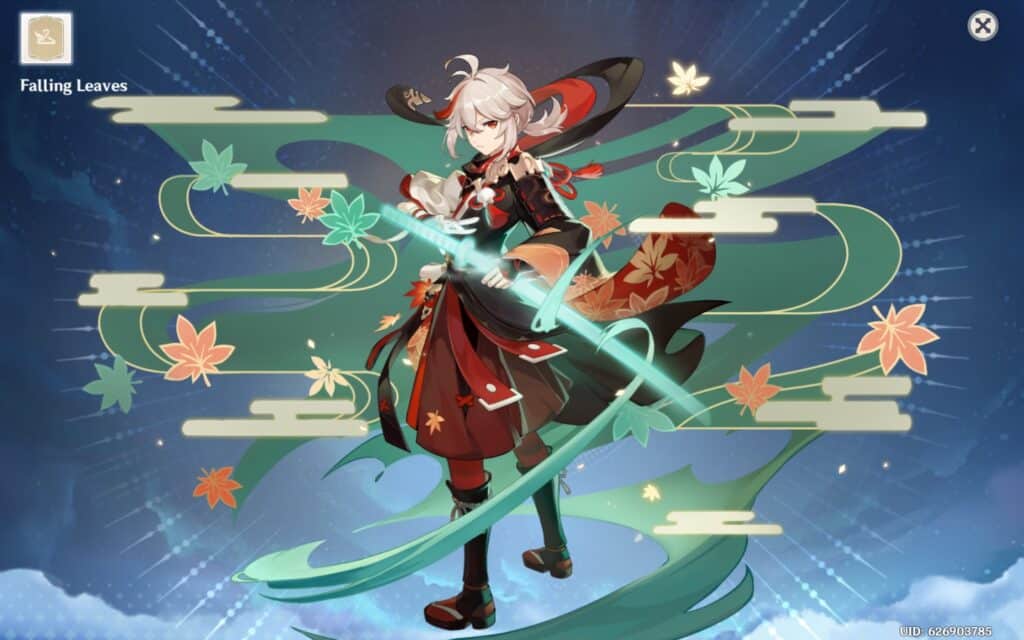 A wandering samurai from Inazuma, Kazuha is a 5-star Anemo sword user and was the former heir of the now-abolished Kaedehara Clan. He currently serves as a temporary crewmate aboard Beidou’s ship, the Crux. Kazuha has a seemingly easygoing demeanor, but his heart deals with the burdens from his past.

Kazuha is a great Elemental DMG dealer who can fit into almost any team and is considered one of the best characters in the game. He can trigger powerful Swirl reactions with his Elemental Skill and Elemental Burst.

Read this guide to help understand his skills and how to use his abilities to make all your combat encounters a breeze.

How To Unlock Kazuha in Genshin Impact

Kazuha is a 5-star Anemo character who is only unlockable by wishing on his rate-up Event banner, Leaves in the Wind. Kazuha’s banner first came out in V1.6 in early July 2021 and has since been rerun once in the first phase of V2.8 in July 2022.

Kazuha’s Normal attacks can perform 5 consecutive slashes with his sword. He can perform a charged attack and deliver 2 rapid sword slashes. He can also perform a plunging aerial attack, dealing AoE damage on impact.

When Kazuha uses his Elemental Skill, he launches himself in the air dealing Anemo DMG to enemies below. If he follows up with a Plunging Attack, the DMG is converted to Anemo DMG and creates a small vortex that pulls nearby objects and enemies towards him.

If players charge up Kazuha’s Elemental Skill by holding the Skill button, he deals an even higher Anemo DMG over a larger AoE.

Kazuha’s Elemental Burst is his signature technique that deals AoE Anemo DMG around him with a single slash. The Burst leaves behind a field – “Autumn Whirlwind”, which will deal AoE Anemo DMG. If it comes into contact with Hydro/Pyro/Croo/Electro, it deals increased Elemental DMG of that type to the enemies in it.

If Kazuha’s Elemental Skill comes into contact with Hydro/Pyro/Cryo/Electro, that Element will get absorbed and deal an additional 200% ATK DMG of the Elemental Type in the Plunging Attack. This effect can occur once per use of Elemental Skill.

When Kazuha triggers a Swirl reaction, for every point of Elemental Mastery, he has all party members get a 0.04% Elemental DMG Bonus to the element absorbed by Swirl for 8s.

Kazuha’s Utility Passive decreases Stamina consumption while sprinting for your own party members by 20%.

Kazuha’s Elemental Burst increases his own and the Elemental Mastery of other characters within the field by 200 for its duration.

Kazuha’s Elemental Skill level is increased by 3 and can be upgraded to a maximum level of 15.

Using Elemental Skill when Kazuha’s Energy is lower than 45, regenerates 3 or 4 Energy for Kazuha. Kazuha regenerates 2 Energy per second while gliding.

Kazuha’s Elemental Burst level is increased by 3 and can be upgraded to a maximum level of 15.

After Kazuha uses his Elemental Skill or Elemental Burst, his attacks gain Anemo Infusion for 5s. The DMG dealt by Normal, Charged, and Plunging Attacks is increased by 0.2% for each point of Elemental Mastery.

Freedom-Sworn is Kazuha’s signature weapon and the best weapon to use with him since it has Elemental Mastery as a substat.

When Kazuha triggers Elemental Reactions with Freedom-Sworn, he will gain a Sigil of Rebellion once every 0.5s. Party members gain 20% ATK and 16% increased Normal, Charged, and Plunging Attack DMG for 12s for every 2 Sigils collected. This effect does not stack and you will gain no Sigils for 20s if you trigger the effect once.

Favonius Sword is a good F2P option for players as it gives Kazuha a bonus Energy Recharge, letting him charge his Elemental Burst faster. When equipped, CRIT hits have a 60% chance of generating Elemental Particles regenerating 6 Energy every 12s.

Another good sword is the Sacrificial Sword. It has a lower Elemental Recharge, but it has a high chance of resetting the Elemental Skill cooldown once every 30s.

There are several teams that Kazuha can contribute to as a Sub DPS, Anemo Sub-DPS, Support, and Swirl Support role. His teams are not fixed, and he can flexibly fit into many more. Some of these teams are –

Kazuha’s best builds help him play the role of an Anemo Sub-DPS, Support, and Swirl Support. Here is how you can build him to be compatible with these roles.

The best weapon for this build is the Freedom-Sworn with Iron Sting as a good alternate weapon.

The best Artifact Set for this build is the 4-Piece Viridescent Venerer with the following stats:

Building Kazuha on Elemental Mastery as an Anemo Sub-DPS greatly increases the DMG dealt when he triggers his Swirl Reactions.

The best weapon for Swirl Support is also Freedom-Sworn with Favonius Sword as a good alternate weapon.

The best Artifact Set for this build is the 4-Piece Viridescent Venerer with the following stats:

Building Kazuha for Swirl Support, make sure to always have your Elemental Burst ready. Thus, players should have around 170% Energy Recharge to effectively use this build. You can also invest in Elemental Mastery for increased reaction damage.

Below is a complete list of all the materials you will need to ascend your Kazuha to Ascension Phase 6.

How to get Vayuda Turquoise?

How to get Treasure Hoarder Insignia?

How to get Marionette Core?

Players can get Marionette Core from Maguu Kenki, a boss-type enemy on Yashiori Island, Inazuma.

How to get Sea Ganoderma?

Sea Ganoderma is an Inazuma Speciality that players can find near the northern shores of Seirai Island and around Kannazuka. They can be grown in the Serenitea Pot, and you can purchase five Sea Ganoderma every three days from Obata’s shop in Ritou.

How old is Kazuha?

While his official age is not confirmed, community speculation places Kazuha at 18/19 years old.

How Tall is Kazuha?

That’s all you need to know about Kazuha in Genshin Impact and how you can build him as your Swirl Support. Kazuha is a powerful Anemo Sub-DPS character with a very fun playstyle and makes world exploration very easy. When built correctly, he can do as much DMG as the main DPS on your team. If you have any questions, make sure to ask them below!