How to Get a Trident in Minecraft 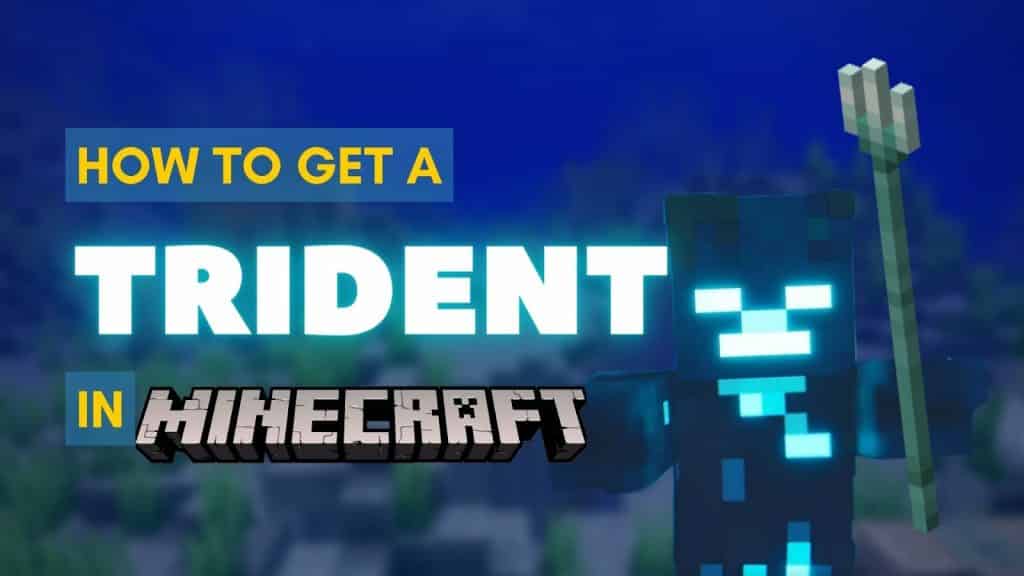 The trident was first introduced in the Aquatic update (version 1.4). It is unique for its dual functionality as a melee spear and a throwable projectile, a first in the game at the time of its release.

The trident is incredibly rare and, even worse, it cannot be crafted. Lucky for you we’ve put together this guide on how to get a trident in Minecraft, so you can conquer the game’s danger-filled waters.

How to Get a Trident in Minecraft

As mentioned above, there’s no way to craft tridents in Minecraft. Tridents can only be obtained by killing drowned mobs that spawn with a trident.

In Java Edition, there’s only a 6.25% chance that a drowned mob will spawn with a trident (15% in Bedrock Edition).

It’s bad enough that the drop rate for tridents is so low, but when you add in the fact that the drowned only spawn underwater and are notoriously hard to kill, you have the ultimate recipe for frustration.

As a side note, when a zombie’s head is submerged in water for at least 30 seconds, it will be converted into a drowned. Drowned that are converted from zombies cannot drop tridents.

Best Tips to Get a Trident in Minecraft

As we’ve established, obtaining a trident can be tiresome work. But don’t get discouraged just yet, because we’ve got some great tips that can help speed up the process.

With mobs as dangerous as drowned, nothing beats having a few friends to back you up. There’s power in numbers, so get your friends online and ask them to join you on a drowned hunting spree.

If you prefer playing solo, there’s always the humble axolotl. These adorable, aquatic pals are great at underwater combat. And they’ll even heal you up every time you defeat an enemy!

Equip a Weapon With the Looting Enchantment

When you use a weapon with the Looting enchantment to kill a drowned with a trident, the chances it will drop a trident increase by 1% per level of Looting.

Lure Them to Shallow Waters

Whenever possible, lure the drowned to a shore or beach. Drowned will chase you relentlessly, but they cannot move out of the water. This means you can hit them repeatedly from the safety of land for an easy kill.

Part of what makes killing drowned mobs so hard is how slowly you move when you’re underwater. That’s exactly the problem Depth Strider was made to solve.

This enchantment reduces the effect of water friction, allowing you to move faster through the water. At max level, Depth Strider allows you to swim in water at the same speed as you can walk on land.

In typical Minecraft fashion, players have concocted all sorts of interesting structures designed to kill drowned.

You can build your own too. Though the time it takes to collect the resources and build the thing may take you longer than just farming the ‘drowned’ yourself.

Still, if you want an endless supply of tridents, nothing beats a good trident farm. Check out one of our favorites by user Chapman Farms on YouTube.

How to Trade With a Drowned for Trident

Many online sources claim that you can use a nautilus shell to get a trident from a drowned.

Some say you can trade a shell for a trident, while others want you to throw the shell at the drowned to make it drop a trident.

Neither of these rumors is true. The only way to get a trident in Minecraft is by killing a drowned.

How to Repair a Trident in Minecraft

Tridents have 250 durability, which degrades by one point for every time you use the weapon. You can repair a damaged trident at an anvil by combining two tridents.

That’s just about everything there is to know about how to get a trident in Minecraft.

Getting a Trident is not an easy task — the low drop rate and the viciousness of drowned mobs make it very hard to farm tridents. Stick with it; with patience, planning, and a little help from your friends, you’ll have a trident in no time.

More Minecraft Guides and Articles for You