How Big is a Chunk in Minecraft? 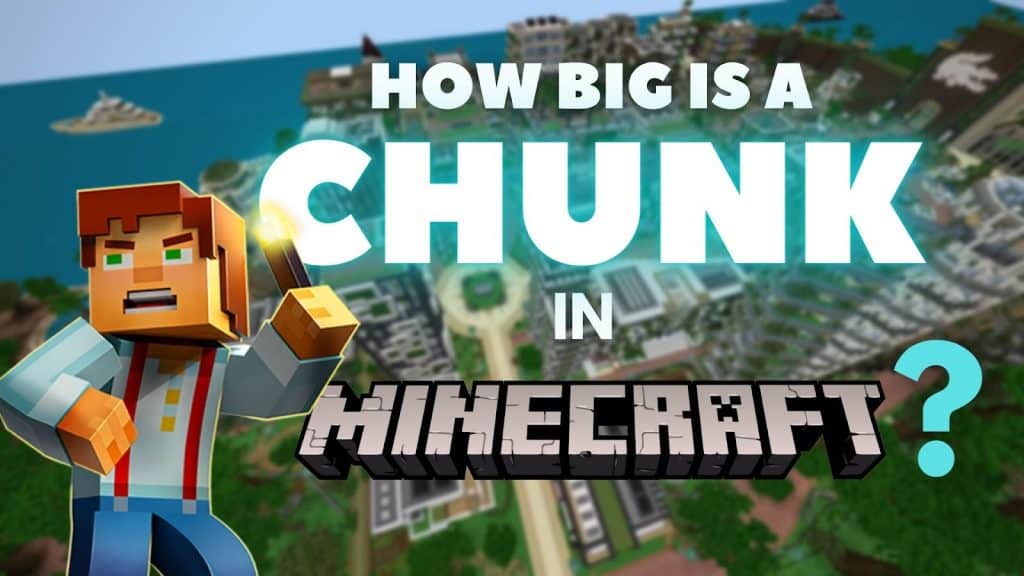 Minecraft is famous for its enormous world—in fact, a Minecraft map is more than 8 times bigger than Earth!

It would take a ridiculous amount of memory to load the entire map at once, so Minecraft doesn’t. Instead, to keep the gaming experience playable, even on lower-end rigs, Minecraft loads its map in bits and pieces called “chunks.”

How exactly does the chunk loading system work, and how big is a chunk in Minecraft? Read on to find out.

What is a Chunk?

As we touched upon earlier, Minecraft divides its massive world into smaller blocks of data called “chunks.” Chunks are procedurally generated around the player when they first spawn.

As you move about the world, the game generates more chunks to render the environment around you. If the player logs out of the game, any loaded chunks will stay in memory for 10 seconds before being removed.

If they teleport to the Nether, all loaded chunks remain in memory for 60 seconds.

That’s a basic explanation of how chunks work in Minecraft. There are other, less common chunk loading schemes used in Minecraft, but those are beyond the scope of this piece.

How Big is a Chunk in Minecraft?

To keep the game from eating up all your computer’s memory, the world is split up into smaller blocks of data called “chunks.”

The Spawn Chunk is a 16 x 16 block of data that is centered around the world spawn point (the location the player spawns when the world is first loaded).

If the Spawn Chunk is located in the exact center of the world, it is 17 x 17 blocks large.

How to see chunk borders in Minecraft?

If you’re curious to see how the game loads chunks in real-time, you can press F3 + G together. This will bring up the Chunk Viewer, which displays a yellow-line frame overlay atop the blocks in a chunk.

Once it’s activated, try walking around the world. If you’re playing on a server with Flying enabled, fly up into the sky and take a look around. As you move, you can see the chunks being loaded around you!

How many chunks are in a Minecraft map?

A Minecraft world can load up to 14,062,500,00 chunks (roughly 14 trillion). Most people will never see all—or even most!—of the chunks in a Minecraft world.

How many chunks are loaded around a player?

In the single-player mode in the Java edition of Minecraft, the game loads all chunks in your render distance.

In the Bedrock Edition, you have the option to pick how many chunks you want to be loaded in a world at once.

In multiplayer, the render distance is usually determined by the server administrator. How many are actually loaded at once is also affected by your personal settings.

For example, if your render distance is 16 chunks, but the server you’re playing on is set to 12 chunks, then your computer will only load 12 chunks at once.

However, if the server renders distance is 12 chunks and your render distance is 8 chunks, your computer will only load 8 chunks.

There’s your answer to how big a chunk is in Minecraft! We’ve also touched upon what chunks are and how the game loads them.

If you’re interested in the more technical side of chunk loading, you can find a more detailed explanation here.