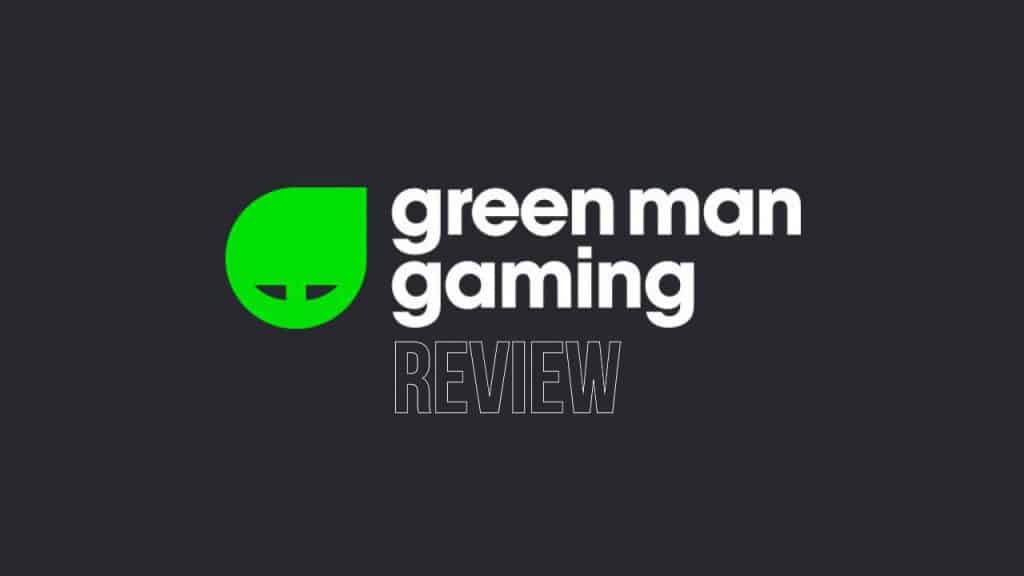 Gaming is an expensive hobby and it gets more expensive every year. As games are getting more advanced and complicated to make, development costs go up.

This cost is then passed onto us, the gamer.

This means we gamers are regularly having to find new ways to save bucks. This also means that there are constantly new sites cropping up with the sole aim of ripping us off.

If someone is offering you a hefty discount and can’t explain how they’re doing it, it’s often too good to be true.

One of the oldest scams in the book is sites that offer stolen CD/ download keys.

Keys are either fraudulently obtained or illegally generated which are then sold on to gamers at a discounted rate.

This brings us to green man gaming. A site that’s been around for a while and offers just that, discounted game keys.

So is Green Man Gaming legit and can you trust them?

Read our tell-all green man gaming review to find out.

So What is Green Man Gaming?

Green Man Gaming has been around for a while but you may not have heard of them.

The company has been around for over 10 years and has won a ton of business awards.

Their core business is as an online storefront so that’s what we’ll be focussing on. They also sometimes act as an independent publisher, mostly indies.

Predominantly Green Man Gaming is an online store that specializes in selling video games at a discount.

Green Man Gaming simply doesn’t offer games at MSRP. Even games that have just been released are usually sold at some kind of discount.

They’re kind of a mixture between a traditional online realtor like Amazon which tends to sell physical products and a digital distribution service like Steam, GOG, or Origin.

Normally, when you buy a game online you’re either buying a physical copy that is shipped to you or a digital copy that is then added to that platform’s library.

Green Man Gaming bucks these trends. Instead, they predominantly sell product keys that are then redeemed elsewhere.

So is Green Man Gaming Legit?

I know what you’re thinking.

A company that sells games, even brand new ones at a discount has to be doing something dodgy right?

If you’re familiar with PC gaming you’ve probably heard of dodgy sites selling game keys before. These keys have often been gained through false pretenses or are downright stolen.

So at first glance, it seems only sensible to be cautious around Green Man Gaming.

85% off? There has to be something fishy going.

Only there isn’t. Green Man Gaming is 110% legitimate.  They’re a huge company that’s been around for a long time. If they were breaking the law they’d be gone now.

When considering legitimacy there are three factors that we can consider

What other sites are saying

If we delve a little deeper we can see that 90% of reviews are positive, with only 7% being negative.

I had a scroll through the negatives and would say the majority of negative reviews are from people who failed the idiot test. Or aren’t very tech-savvy and are complaining about things outside of Green Man Gaming’s control.

Unfortunately, there is no Green Man Gaming bbb review. This is sometimes a red flag.

However, there are enough positive reviews online to assuage those worries.

On top of this professional gaming sites like Kotaku, IGN and VG247 have all written articles about Green Man Gaming. Big names like these wouldn’t risk their reputations sending readers to an unreliable site.

If you’re not sold on the fact that they have overwhelmingly positive reviews online there is a second factor we should consider.

Who Green Man Gaming is doing business with.

There are some big names up there. See, Green Man Gaming predominantly gets its product keys straight from the game publishers.

Their codes aren’t stolen or gained from illegitimate means. They buy them straight from the horse’s mouth.

Big companies wouldn’t partner with a company like Green Man Gaming if they weren’t legitimate. As for why they allow GMG to sell their games at a discount? Who knows.

I would guess that GMG can sell the games at a discount because of lower costs. There’s no physical product (box, disc, etc) so they cut costs there.

Furthermore, GMG doesn’t host the downloads so they save money on server costs, etc.

Since GMG is saving costs they probably pay publishers proportionately more than bigger sellers like Steam whilst also managing to offer a discount to gamers.

It would also appear that for some games their stock of codes is pretty limited.

The general rule is that if something is too good to be true, it probably is. A quick look at GMG shows some pretty impressive discounts. How can they sell games at 60%, 70%, 80% off?

Well because everyone is. Steam, PSN, and Xbox all run similar sales where they advertise games at ridiculously low discounts. The fact is very often no sane person is buying that game at full MSRP. GMG is the same.

Furthermore, games which aren’t included in sales aren’t actually that cheap compared to the competition. Very often you can pick them up for less at Amazon or Gamestop.

Wait didn’t I hear about some controversy with Green Man Gaming?

A quick google search of Green Man Gaming will show some stuff they got caught up in, circa 2015.

GMG was accused of purchasing unauthorized keys from less-than-savory third-party sites. Some pretty big hitters like Activision and Ubisoft then piled on to say that GMG wasn’t an authorized retailer.

Whether GMG was in the right or wrong back then is still up for debate.

However, ever since GMG has dedicated itself to providing the sources of the keys for every product they sell. So you can be assured the key you’re paying for is legit.

I don’t think intel would be vouching for them if they weren’t legit.

So we’ve confirmed that you can trust GMG.

How Does Green Man Gaming Works?

Green Man Gaming works a lot like most other online stores. Over the years GMG has offered games on different platforms.

Because of their business model, there’s no guarantee that you’ll be able to find the game you want on the platform you want.

Let’s take a recent hit, Back 4 Blood as an example.

We have three versions here, but no Playstation option.

You need to make sure you select the correct platform.  If you select Steam your key won’t work on Xbox Live and vice versa.

Also, prices differ from platform to platform, with PC normally being the cheapest.

Once you’ve paid you’ll be provided with a product key for whichever platform you chose. For example, on Steam the page looks like this

Once you redeem the key you’ll be able to play your game.

How Cheap is Green Man Gaming?

So the next question is how cheap are they? Unfortunately, this is probably the most disappointing thing about GMG, It’s just not that cheap, especially when it comes to newer releases.

Let’s take Fary Cry 6 for example. On GMG the standard edition is $55 (At the time of writing the review) which is an 8% discount.

The same game on Amazon

$51 (Again at the time of writing this review). So it’s cheaper to get the physical edition. An edition you can then sell on when you’re done.

It’s a similar story for Guardians of the Galaxy

Which is being sold at full MSRP. Which pretty much defeats the point of using GMG at all. To be fair, you’re not getting ripped off. You’re just not gaining anything.

So if you want to save money you’re best off focusing on Green Man Gaming’s sales. For example, they have a pretty heft Halloween sale going on right now

However, even then you need to be careful.

Biomutant is advertised for $40 here (34% discount) on GMG which sounds great. Yet if you check the PSN Halloween sale? The same game is a dollar cheaper.

Not a huge difference, but still cheaper. Especially when PSN has a reputation for being expensive.

You may have seen a Green Man Gaming mystery pack review or two online. The Mystery packs had a chance of offering some pretty great discounts.

When I was in high school a dollar store opened up in my small hometown. Being young and impressionable, my friends and I flocked to that store every day. We would spend our pocket money on confectionery and snacks, mistakenly thinking we were somehow saving a fortune.

Little did we know that Walmart and Costco sold most of the same things for less than a dollar. We were told we were getting a bargain and we believed it.

This anecdote is Green Man Gaming in a nutshell.  Are most of their products sold for less than MSRP? Absolutely! Can you get them for less elsewhere? Sometimes.

Green Man Gaming tries very hard to impress upon you how good their discounts are. And some of them are pretty good.

However, the truth is if you shop around you’ll very often find better deals elsewhere.  Either from other digital distributors like PSN, Xbox Live, and Steam or physical retailers like Amazon.

Green Man Gaming is legitimate and they offer some good deals. But if you want the best deals you’re still going to need to shop around.

Absolutely. Sites like Green Man Gaming can feel a little bit too good to be true. However, they have almost 20,000 reviews and a rating of 4.5 stars on TrustPilot which is a great sign. Key sellers like green man gaming might not be great for developers or publishers but you can trust them. If you have any problems with your keys they even offer no quibbles refunds.

How does buying a game on green man gaming work?

It’s pretty simple. The process is like most other online stores. First, choose a game you want to play and a platform you want to play it on.  Make sure you select the correct platform. You don’t want to buy an Xbox key if you’re wanting to play on Steam.

Then proceed to checkout, enter your payment details and gift card details if you have one.

How do you activate a game in Green Man Gaming?

Once you’ve bought your key you need to visit the platform you bought the key for and activate it there. There are no activating games on green man gaming itself.

If you buy a Steam key, yes. When choosing your game make sure you choose the correct platform. For example, if you buy A resident Evil Village PS4 key then that key obviously won’t activate on Steam.

How do I use my Green Man Gaming key?

Visit the platform store where you bought the key. So if you bought a Steam key, visit Steam and log in. Then click games and choose the redeem key. For Psn and Xbox, their shop apps also have a section where you can redeem a key.

Can you use Steam Wallet on Green Man Gaming?