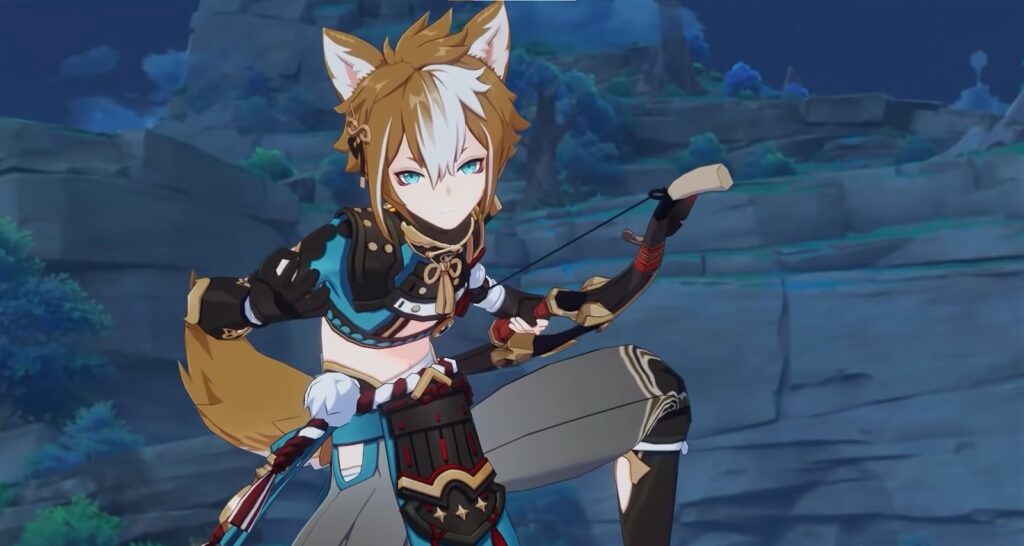 “Kindness and loyalty are the representation of virtue. Without a doubt, my friend Gorou is a virtuous general.”

Gorou is a general of the Watatsumi Army serving under Sangonomiya Kokomi. He is a 4-star Geo bow user with a strong sense of compassion and is well-liked by the soldiers under his command.

Born with a fighting intuition, Gorou is said to have found a way to victory even in the most difficult battles.

Read this guide to help understand his skills and make the best use of his kit.

How To Get Gorou in Genshin Impact

Gorou is a 4-star rarity character in Genshin Impact, so he isn’t limited to an event-specific banner. He can be obtained by wishing on all banners. There are a bunch of methods you can use to get Gorou:

By wishing on the Standard Banner Wanderlust Invocation, players have a chance to get Gorou out of a pool of multiple 4-stars.

Gorou was added to Genshin’s 4-star pool in the second phase of the v2.3 update.

You can occasionally get Gorou from Paimon’s store by spending Masterless Starglitter.

He is often featured as a 4-star character in limited-time banners, and the chance to obtain him is boosted.

Gorou’s Normal attacks have him perform 4 consecutive shots with his bow. He can perform a charged attack and deliver a precise Aimed Shot dealing Geo DMG.

He can also perform a plunging aerial attack firing a shower of arrows and dealing AoE damage on impact.

Using Gorou’s Elemental Skill sets up a General’s War Banner and deals AoE Geo DMG. The banner provides buffs based on the number of Geo characters in the party. By holding the Elemental Skill, you can adjust the location of the banner in the field.

Impregnable: Having 2 Geo characters in the party increases resistance to interruption.

Using his Elemental Burst, Gorou deals Geo DMG and creates a field known as General’s Glory, which provides buffs based on the number of active Geo characters in the party.

In the Elemental Burst field, General’s Glory generates a Crystal Collapse within the skill’s AoE that deals AoE Geo DMG to an opponent every 1.5s.

Heedless of the Wind and Weather

In the First Ascension Passive, after using Gorou’s Elemental Burst, for 12s, all party members’ DEF is increased by 25%.

Gorou’s Utility Passive marks the location of resources unique to Inazuma on the map.

Rushing Hound: Swift as the Wind

Sitting Hound: Steady as a Clock

Every 0.1s, Gorou’s Elemental Burst duration is extended by 1s when a nearby active character obtains an Elemental Shard from a Crystallize reaction.

Increases the Elemental Skill level by 3 and can be maxed up to level 15.

When using Elemental Skill with 2 or 3 Geo characters in the party, based on 50% of Gorou’s defense, every 1.5s, the skill will heal active characters within its AoE.

Increases the Elemental Burst level by 3 and can be maxed up to level 15.

For 12s after using Gorou’s Elemental Skill or Elemental Burst, the Geo CRIT DMG of all party members is increased based on the following conditions:

Here are the ascension materials you will need to get Gorou from level 1 to Ascension Phase 6.

Where to get Prithiva Topaz?

Where to get Spectral Nucleus?

You can find them by killing Specters found on both Seirai Island and Watatsumi Island, mostly along the shorelines. Normally a bunch of them roam together, so you’re bound to find multiple of them at once.

Where to get Perpetual Heart?

Where to get Sango Pearl?

Sango Pearls are abundant in Watatsumi Island and Enkanomiya among seashells and corals. A lot of them can also be farmed under the Sangonomiya Shrine, Suigetsu Pool, and The Serpent’s Bowels.

Elegy for the End

Elegy for the End is so far the only 5-star bow in the game that adds Energy Recharge as its sub-stat. When Gorou is wielding the bow, it increases his Elemental Mastery by 60.

Additionally, when Gorou uses his Elemental Burst or Skill, he gains Sigils. When 4 Sigils are collected, they will be consumed, increasing Elemental Mastery by 100 and ATK by 20% for 12s.

Favonious Warbow is one of the 4-star bows with Energy Recharge as a bonus stat. When equipped, every 12s, Gorou’s CRIT Hits have a 60% chance to generate Elemental Particles, which will regenerate 6 Energy for whichever character catches the particles.

Sacrificial Bow is a good alternative 4-star bow for Gorou with an increase in Energy Recharge. Gorou has a 40% chance to end his own Elemental Skill’s Cooldown after using the skill once every 30s.

This is considered Gorou’s best Artifact set as it increases his DEF%, which is what Gorou scales off.

As Gorou mainly deals with Geo DMG building him on DEF will boost his performance.

There are several teams that Gorou can contribute to in a Support role. Some of these teams are:

In this party, Itto is the main DPS who can spam his Charge Attack while Albedo is the sub-DPS with his Elemental Burst. When Gorou is acting as Support, Albedo’s Elemental Burst and Itto’s Charged Attack gain increased Geo DMG and DEF Bonus. Zhongli will provide a shield in this team.

Additionally, he will improve all party members’ Geo DMG.

Gorou’s best builds help him play the role of a Geo Support. Here is how you can build him to be a compatible Geo Support.

The best weapon for Gorou Support build is the Favonius Warbow, with Sacrificial Bow as a good alternative.

The best artifact set for this build is the Husk of Opulent Dreams.

Gorou, as Support, relies on DEF% and Energy Recharge as his main stats. This way, he can recharge his Elemental Burst quickly and boost other Geo characters in the party. The Favonious Warbow will be able to boost his CRIT Rate.

How old is Gorou?

How Tall is Gorou in Genshin Impact?

Gorou is an underutilized Geo 4-star. He provides some of the best buffs, ranging from ATK%, DEF%, and interruption resist to all Geo Teams. When leveled up enough, Gorou provides great support utility, even when paired up with a 4-star set and weapon. Let us know if you found this Genshin Impact Gorou guide helpful in the comments below!