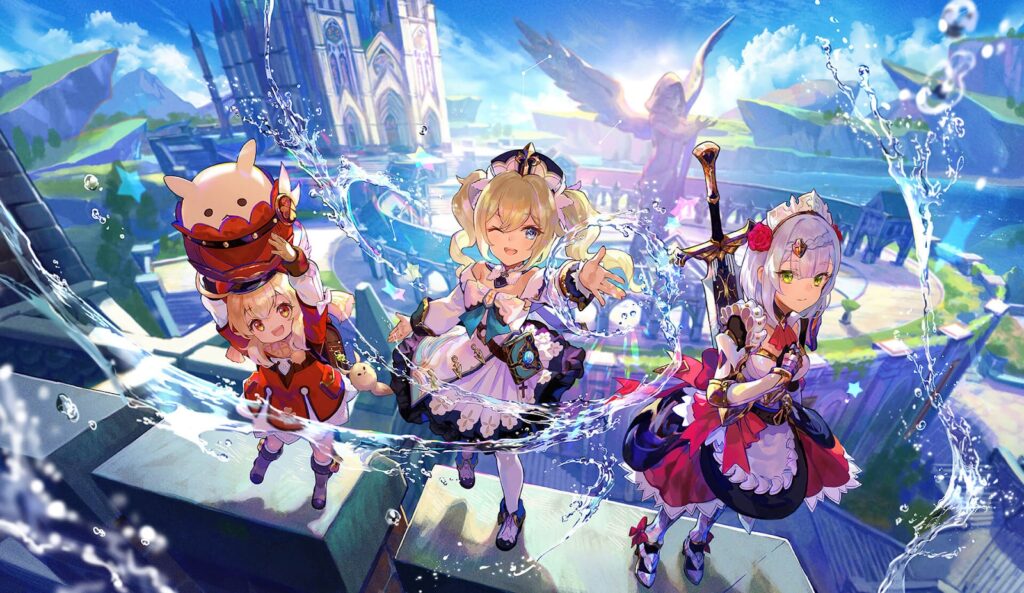 Genshin Impact is an extremely beloved name in the gaming world, as hundreds of fans adore its stunning graphics, expansive open world, and Gacha-based character-collecting gameplay.

If you’re a fan and are looking for the best games like Genshin Impact with similar gameplay, or simply just looking for an alternative to the world of Teyvat, we’ve got the 10 best games here for you to check out.

We’re starting off the list with Honkai Impact 3D, another beloved HoYoverse property. The game is set in a dystopian world where players control powerful characters known as Valkyries and fight against the Honkai, a mysterious and destructive force.

Often confused with Genshin Impact for its similar name and key mechanics, such as the gacha system and the hack n’ slash combat, Honkai Impact 3rd actually features key differences that make the game a unique yet equally exciting experience.

9. The Legend Of Zelda: Breath Of The Wild

The Legend of Zelda: Breath of the Wild is an open-world action-adventure game that shares many similarities with Genshin Impact. In fact, many call it the inspiration for Genshin Impact’s open-world traversal and cel-shaded art style.

Players explore a vast, beautiful world filled with mysterious shrines, hidden secrets, and dangerous enemies. Like Genshin Impact, Breath of the Wild also features a variety of elemental powers that players can harness to defeat foes and solve puzzles.

Get The Legend Of Zelda: Breath Of The Wild

If you want games like Genshin Impact for PC, your search is over.

Albion Online is a fantasy game that features a player-driven economy and a classless character system. Players can explore the vast open world, complete quests, engage in PvP combat, and participate in guild wars.

The game features a wide variety of character customization options and a deep combat system similar to Genshin Impact. It’s an underrated gem in the MMORPG genre, for sure!

Ni No Kuni 2: Revenant Kingdom is a charming and entertaining JRPG that builds upon the wide success of its predecessor, Wrath of the White Witch. In it, players control the young king Evan as he sets out to build a new kingdom and unite the entire world.

The game features real-time combat with real online enemies, a vast open world to explore, and a wide variety of character customization options to choose from.

Fans of Genshin Impact will particularly enjoy the fast-paced combat system and colorful cast of characters that inhabit its world.

If you’re looking for a huge online world to get lost in for weeks at a time, look no further than Final Fantasy XIV. This MMORPG boasts all the lore and history of the classic series, combined with the ability to fully customize your character and experience.

Hosting a player base that is around 20 million strong, the game regularly receives updates such as 2019’s Shadowbringers which help expand the adventure even further.

Runescape is an infamous fantasy game set in the world of Gielinor. Now one of the oldest MMORPGs still in operation, the game has been around since 2001. We also included this gem in our list of games like Wizard101.

Players can choose to be a member of one of the game’s three factions and engage in various activities, including combat, crafting, and trading. The game features a wide variety of skills to train and a fantastic community to help test those skills.

If you like Genshin Impact, you’ll find a lot to love in the cartoonish and fun world of Runescape!

Immortals Fenyx Rising is a well-received action-adventure game set in the world of the Greek gods. Players follow Fenyx, a hero on a quest to save the gods from the evil Typhon.

Immortals Fenyx Rising is an incredibly ambitious title with inspirations taken, of course, from Genshin Impact but also from other renowned titles such as God of War.

Still, the game also gives you a lot of distinct features to play around with, such as the “godly powers” you can use to solve puzzles and defeat your mythical adversaries. It’s a whole lot of fun!

World of Warcraft is inarguably the world’s most popular MMORPG. Set in the high fantasy world of Azeroth, players choose to align with either the Horde or Alliance faction.

With how popular it is, it’s no surprise why the game is still getting regular updates and patches to this day, such as the well-received Dragonflight DLC late last year.

Explore the game’s expansive world, complete quests, and engage in player-vs-player combat. The game also features various WOW character classes and races, rich lore, and a complex WOW leveling system that fans of Genshin Impact can sink their teeth into.

Get World Of Warcraft

Tower of Fantasy is a game similar to Genshin Impact in ways more than one. However, it cannot be called a clone of the popular game, as it has its own unique features and elements that have helped it garner its own place in the genre.

In Tower of Fantasy, players take on the role of a newcomer in a post-apocalyptic, futuristic town and explore a chaotic yet beautiful environment. The gameplay is varied and will keep players engaged for months, with a surprisingly enjoyable grind factor.

Get Tower Of Fantasy

Based in a fantasy land called La Place, the main objective of Tales of Wind is to defeat monsters and trap them in soul cards, which can be used to level up your power. Just like Genshin Impact, the game features an engaging Gacha system.

Players can transform into monsters and use their abilities to take down enemies. In addition to fighting monsters, Tales of Wind offers a variety of casual modes such as shooting, quizzes, and racing.

If you need a break from the action, the game even has an auto-battle and auto-path system, as well as activities like maintaining a farm, partying with other players, and making your own team. What more could you ask for?

Get Tales Of Wind

Whether you’re a fan of open-world exploration, PvP combat, or character customization, you’ll find there’s a game on this list for you!