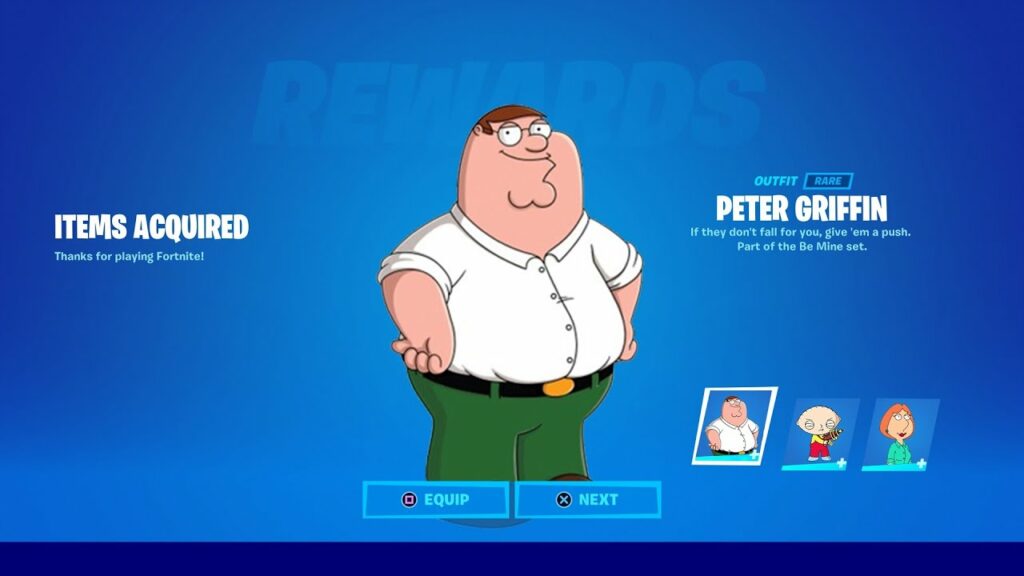 A leak suggests a potential Family Guy skin in Fortnite. You might be seeing Peter Griffin owning you in-game soon!

A fresh leak claims that Family Guy skins might be coming to Fortnite. Fortnite receives new content from Epic Games frequently. A new patch or piece of downloadable content will add to this sizeable online game almost every week. Each time a major update is released, the community’s leakers and data miners get on it as soon as possible to glean as much helpful information as possible.

A well-known Fortnite leaker discovered a back bling texture over two years ago. This decrypted file revealed an episode of Family Guy in which Peter Griffin, in pain from a recent knee injury, tries to confront the infamous colossal chicken. Because of this, some players speculated that Peter and other Family Guy characters would soon be available as Fortnite skins, which would be an unusual addition to the game.

It now appears likely that a Family Guy skin will be available in the Item Shop in the near future. The same leaker discovered a new cosmetic item with an ID in earlier leaks in the game files. Moreover, the name of the file is “CID TBD Athena Commando M FrenchFry,” which suggests a male skin with the FrenchFry code name.

Some fans are skeptical that this will ever become a real collaboration. Epic Games may put on a show to taunt the leak and rumor community. Previous leaks, however, have been accurate, and there are also fan-made predictions among famous streamers. Take a closer look at what the predictions are.

If this event turns up being legit, look for Icon Series skins and emotes to be available, as well as time-sensitive tasks that reward experience. Not to mention the upcoming Plague Doctor skin of Fortnite.