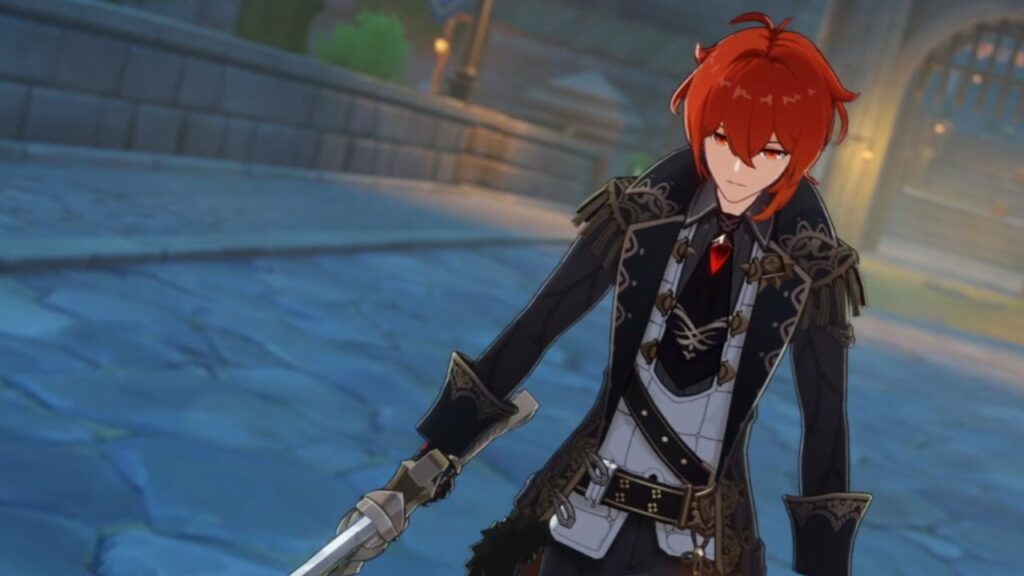 “Master Diluc is my senior, and I have the utmost respect for him. Though we have gone separate ways, I can sense we share the same strong commitment to protecting Mondstadt at all costs.”

Diluc is the owner of the Dawn Winery and a descendant of the Ragnvindr Clan. He is a 5-star Pyro character and a skilled swordsman who is one of the early main characters in the Mondstadt region.

Despite having a rocky relationship with the Knights of Favonius, he still cares about Mondstadt’s safety and saves it from external threats in his own way.

Diluc has one of the strongest DPS builds available in the game. Using his Elemental Burst will deal Pyro damage and trigger an elemental reaction. Diluc’s main DPS Build will help travelers in stacking ATK%, which is one of Diluc’s most important stats.

Read this guide to help understand his skills and deal significant damage to enemies!

How To Unlock Diluc in Genshin Impact

Diluc’s Normal attacks have him perform 4 consecutive slashes with his claymore. He can perform a charged attack and deliver a powerful slash. He can also perform an aerial plunging attack dealing AoE damage on impact.

Using Diluc’s Elemental Skill deals a Pyro DMG charged forward slash. Players can use this skill consecutively 3 times before it goes into cooldown for 10 seconds.

Diluc’s Elemental Burst will summon a Phoenix that will fly forward and deal Pyro DMG to enemies in its way. The skill also infuses Diluc’s weapon with Pyro.

The duration of Diluc’s Charged Attack is increased by 3s, and its Stamina Cost is decreased by 50%.

After using the Elemental Burst, the Pyro Infusion of Diluc’s weapon lasts for 4s longer, and he gains a 20% Pyro DMG Bonus during this effect.

Tradition of the Dawn Knight

Crafting Claymore-type weapons with Diluc refunds 15% of the ore used.

When Diluc takes damage, his ATK gets boosted by 10%, and his ATK SPD is also increased by 5% for 10s. This effect occurs once every 1.5s and can stack up to a maximum of 3 times.

Increases his Elemental Skill talent level by 3 and can be maxed up to 15.

Increases his Elemental Burst talent level by 3 and can be maxed up to 15.

Flaming Sword, Nemesis of the Dark

After using the Elemental Skill the next 2 Normal Attacks will have a 30% increase in their DMG and ATK SPD.

Wolf’s Gravestone is a 5-star weapon that is considered one of the best claymores in the game. Both its main and sub-stat are ATK which is what Diluc scales with.

When this weapon is used against enemies with less than 30% HP, it increases all party members’ ATK.

Players can obtain the Serpent Spine by leveling up the Battle Pass to Level 30 and purchasing the Gnostic Hymn. When Diluc is equipped with Serpent Spine, he will deal 6% more DMG and take 3% more DMG for every 4s he is on the field.

For free-to-play players, Prototype Archaic is the best weapon to use. Like Wolf’s Gravestone, it also has the main and sub-stats based on ATK%. Normal or Charged Attacks with Diluc have a 50% chance to deal an additional 240% ATK DMG to opponents within a small AoE every 15s.

Additionally, players can refine Prototype Archaic up to Rank 5 by creating identical copies at the Blacksmith’s station.

Since Diluc mainly deals Pyro damage so building him on Elemental Reactions and ATK% will boost his performance.

The 2-piece set bonus of this artifact increases Diluc’s ATK DMG by 18%.

You can pair the 2-piece Shimenawa’s Reminiscence with either the 2-piece Gladiator’s Finale or 2-piece Crimson Witch of Flames.

The 2-piece set bonus of this artifact increases Diluc’s ATK by 18%.

You can pair the 2-piece Gladiator’s Finale with the 2-piece Shimenawa’s Reminiscence or 2-piece Crimson Witch of Flames.

There are several teams that Diluc can contribute to, as a main DPS or Support role. Some of these teams are –

If players do not have Xingqiu, you can still make a Melt team using an Anemo character by using swirl with a Cryo character. If the enemy doesn’t move around much, Kaeya can be substituted with Rosaria.

An Overload centered party with Fischl delivering Electro can be useful against enemies who are protected by stone shields.

This F2P team works on triggering melt reactions for Diluc, using Kaeya as the Cryo applier. Noelle will offer the necessary shields to stay in the fight and serve as the party’s healer.

Diluc’s best builds help him play the role of a main DPS. Here is how you can build him to be compatible with both Pyro and Physical.

Diluc’s Best in Slot weapon for this build is the Wolf’s Gravestone or, alternatively, the Serpent’s Spine.

The best Artifact set for this build is the Crimson Witch of Flames, as it increases Diluc’s Pyro DMG bonus.

Main DPS Diluc is built on Elemental DMG and Elemental Mastery along with Pyro DMG bonus from the Artifact Set.

This allows the player to have team rotations and trigger Elemental Reactions like Melt, Vaporize, and Overload.

The best artifact set for this build is the Serpent Spine to increase Diluc’s CRIT Rate and Prototype Archaic as an alternative to increase ATK%.

Sub-DPS Diluc is built on ATK% and focuses more on Diluc as a Physical DMG dealer than an Elemental DMG dealer.

That’s all you need to know about Diluc in Genshin Impact and how you can optimize him to your best use. Diluc is a powerful Pyro DPS character with a fun playstyle focused on his combos. When built correctly, he can provide you with some of the highest DPS in the game. If you have any questions, make sure to ask them below!

How old is Diluc?

How Tall is Diluc?

Who voices Diluc in Genshin Impact?

Diluc is voiced by Sean Chiplock in English, Yang Ma in Chinese, Kensho Ono in Japanese, and Choi Seung-hoon in Korean.