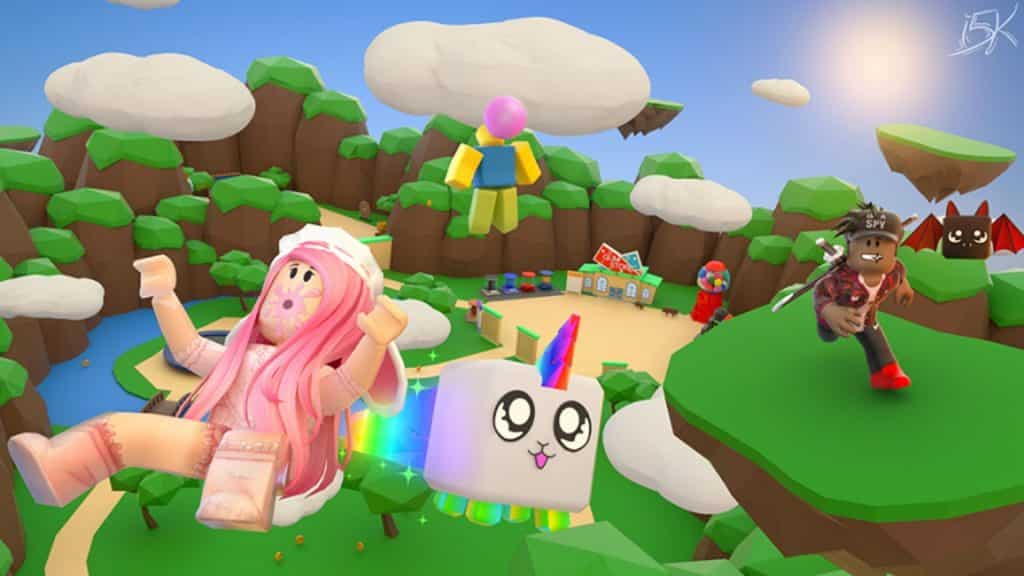 Roblox, an industry staple for game creation systems released 15 years ago with millions of players still logging on daily.

Recent numbers show that 43.2 million daily active users are logging in (2021.) Considering how old Roblox is, these are very impressive numbers.

Roblox is available on PC, iOS, Android, Xbox One and macOS. The game is also free to download and you can play a wide variety of user-generated 3D worlds and game types for free.

While there are micro-transactions in-game using their virtual currency “Robux”, you can still enjoy the game without spending any money.

With an overabundance of game genres to choose from, like FPS, adventure, management sims, horror, RPGs, and simulators among many more, there’s a lot to do in Roblox.

That, added to the MMO and social element of Roblox makes for a unique experience where the possibilities are endless.

While there are many game types to choose from, as well as developers (at least 9.5 million of them) making these games, there are some that stand out among the rest.

One of the more well-known places in Roblox would be Bubble Gum Simulator with a staggering 1.1 Billion visits.

Now, what is Bubble Gum Simulator (BBS or BGS)?

Well, we’re going to be going over what BBS is all about, some codes for Bubble Gum Simulator, and why you’d want to use them.

What is Bubble Gum Simulator?

The simplest I can put is that Bubble Gum Simulator is a game where players blow bubble gum as much as possible.

The more ‘full’ your bubble is, the more coins and collectibles you can earn.

Over time, you’ll get newer, bigger bubble gum along with several other collectibles like hats, pets, and eggs.

Get more coins, unlock newer, bigger bubbles, and you’ll be able to jump higher to new areas and islands in the sky.

At higher island levels, you can unlock rarer eggs, which have a higher chance of spawning even better pets at higher rarity levels.

But if you’ve ever played a simulator Roblox game before, you know that doing all this can get very tedious.

What are Bubble Gum Simulator Codes used for?

Bubble Gum Simulator codes are essentially buffs to various stats in-game. These are provided by the developers, so it’s not the same as cheating per se.

It’s just that playing BGS Roblox may be time-consuming for some, so there are these codes available to speed things up.

For now, most of the BGS codes will raise your luck, increase the chance for shiny pets, increase egg hatch speed, etc. And there are codes for free gems and coins, pets, or eggs.

They’re not game-breaking buffs, but it will make things much easier in Bubble Gum Simulator Roblox.

But something to keep in mind before using any of the codes is that they’re one-time use. If you use a code, you’re going to have to use another one if you want to extend or activate the buff again.

Not a big deal, but something to know before you end up activating all the codes at once.

Since there are new codes updated frequently, there shouldn’t be too much of a problem if you run out of Roblox Bubble Gum Simulator codes.

How To RedeemBubble Gum Simulator Codes?

It’s a pretty simple process to input these codes to get the buffs. However, there are a few things to keep in mind.

Some of these codes will stack. It’s mostly an additional time buff rather than a higher multiple.

Meaning, using three 2x Luck codes won’t get you 6x Luck but will increase the duration of the 2x Luck in-game by extra minutes/hours depending on the code.

To input these codes for Bubble Gum Simulator, follow these steps:

Now that you’re accustomed to what Bubble Gum Simulator codes are, here’s what you can use them for.

The value list is also managed by reputable traders/YouTubers in Bubble Gum Simulator Roblox, so you can trust the list. To access it, check out the link here.

The list highlights various pets, their values in four different currencies, pet rarity levels, and other important information to know.

And since pets in BGS Roblox will increase the number of bubbles you can blow per click, they’re important for farming currencies.

Pets will also increase currency multipliers so players can earn various currencies faster, depending on the pet.

So yeah, that’s pretty much all the latest Roblox Bubble Gum Simulator codes 2022 to help you play the game efficiently. Like I said earlier, they are not game-breaking buffs, but they’ll make things go that much faster.

You might feel like some pets and islands are unattainable, too far out of reach. But don’t give up hope and grind your way through the game with the Bubble Gum Sim codes we’ve provided above to make it a smoother experience.

Remember that these BGS codes are one-time use only. So keep track of the codes you’ve already used on the list, which we’ve formatted for easy tracking.

There are still plenty of Bubble Gum Simulator codes yet to release, so don’t worry about using a code or two. That’s what they’re there for.

Sure, it might feel a bit like cheating, but everyone can use some help every once in a while, right? I think?

Q. How do you get the Kraken in Bubble Gum Simulator?

The Kraken in Bubble Gum Simulator is a secret legendary rarity pet and can be obtained by opening the 400M egg. You can find the 400M egg in the Overworld for 125k gems.

The chance to hatch the Kraken is 0.0000153%, equating to 1 in 6.5 million, so it’ll be hard to hatch. But if you are desperately really looking for it, you can search for trade offers for the Kraken in-game and online.

Q. How do you get Dogcat In Bubble Gum Simulator?

The adorable Dogcat is another secret legendary rarity pet and can be found by opening a Jelly Egg. To get a Jelly Egg, you can find it in the Candy Land Start Area and can purchase the egg for 300k candy.

The chance to hatch the Dogcat is 0.0000125%, which equates to 1 in 8 million. Similar to the Kraken, looking for trade offers online is your best bet if you wanted the Dogcat.

But if you wanted to get the Jelly egg to hatch it yourself, check out these codes for some extra Candy: Candy and MoreCandy.

There are a few ways to increase your Luck in Bubble Gum Simulator.

One obvious way is by using the Bubble Gum Simulator codes for Luck that we’ve mentioned above.

You can also get the Double Luck game pass and then a 2x Luck from the Boosts menu.

There’s going to be a limit to how and when to increase your luck past x4. But if you keep these things on track, you should be able to reach 10x Luck in Bubble Gum Simulator.

Q. What is the code for the Egg in Bubble Gum Simulator?

The codes have been updated, and right now there are only two codes we’ve found that will give you an egg.

These codes are:
– SircFenner
– Spotted

These two codes will give you a Spotted Egg which can hatch a few pets up to the “Rare” category.

Q. What is the Rarest Pet in Bubble Gum Simulator?

While there are a few pets that are ‘rare’ in the sense that they were a part of an event, a developer’s pet, or just no longer obtainable, there’s debate on the ‘rarest’ pet in Bubble Gum Simulator.

In that case, I’d say the rarest pet is Sylently’s Pet or Issac’s Creation 2.0 since they’re exclusive to the developer and builder of the game.

But with pets that you can realistically attain, the rarest would probably be the Giant Robot. The Giant Robot has a 1 in 100 million chance of hatching or 0.000001%.