Call of Duty: Warzone- Boneyard Bunker Codes & How to Open 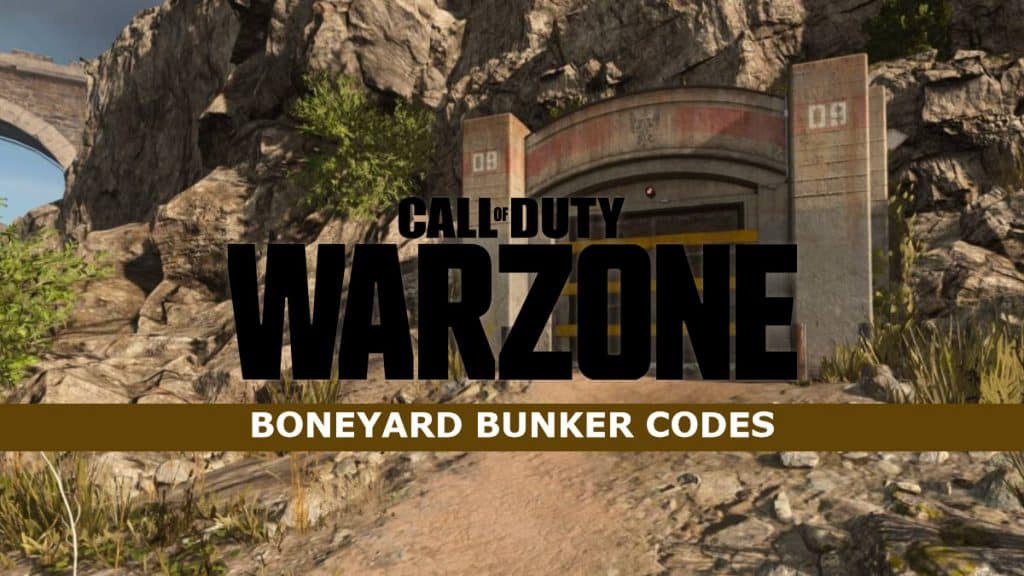 In Call of Duty: Warzone, you have to compete for possession of Bunkers to gain access to the gear inside. You may be startled to learn that even after keeping control of the point, most of these bunkers have a code to enter. Use our Boneyard Bunker codes to gain access to any vault and enjoy the loot in Warzone!

What are Boneyard Bunkers?

The bunkers in Warzone are mysterious vaults brimming with exquisite treasures, notable stacks of money. There are 11 bunkers in CoD near Boneyard, most are located along the map’s boundaries (map compliments of Reddit user u/bubblesandbattleaxes).

The good thing is that most are close to Verdansk’s key landmarks-bunkers near Boneyard- so you won’t have to walk far to find one.

If you’re hunting for god-tier loot to help you win in CoD Warzone, go for the bunkers scattered around Verdansk. Simply look out for their enormous steel doors with horizontal yellow stripes.

Warzone featured 12 bunkers scattered over Verdansk at any given time, several of which could only be accessed by entering specific Warzone bunker codes (Up to season 5). Bunkers are a popular element in Verdansk, with some requiring you to locate an access card rather than just inputting a code.

The new Warzone Season 6 bunkers, on the other hand, are much more similar to the Warzone Red Doors. To access a bunker in Warzone Season 6, you don’t need a code or a key.

There are holes hidden inside the containers that you may grapple down into. In addition, each Warzone Season 6 bunker has a backup walk-in entrance located nearby.

The bunkers in Warzone Season 6 have a World War II (WWII) motif, maybe as a nod to the future Call of Duty Vanguard release date.

The Boneyard bunker codes in Warzone are useful to have in case you ever require treasure on Verdansk’s extreme western outskirts. There are two bunker positions at the Boneyard POI out of the 12 bunker spots distributed throughout the outskirts of Verdansk.

There are 3 independent Boneyard Bunkers in the game, however, as of the latest update, only 2 of them are accessible. Both of which are simple to access with the appropriate passcode.

You may input codes on the keypad of Boneyard Bunker 01 as well as Bunker 03. Bunker 03 does not require any code.

Once you’ve reached either of the bunkers, you’ll discover that you can get inside, but the entirety of the bunker is blocked by a pin pad. This is where you’ll input the codes to get all of the goodies that are waiting for you inside.

How to Open Boneyard Bunkers

A Red Access Card is required to enter most bunkers. These appear randomly and maybe looted naturally – albeit infrequently – and though there is no way to ensure getting one, keep a watch out for Legendary crates – they’re far more likely to spawn in one of them.

You’ll also discover them on your opponents’ unlucky bodies, so don’t be hesitant to interact with other players — it could just pay off. Really.

Once you acquire your card, look at the map and head to the closest vault. If the keypad on the RHS of the door has a green signal, swipe the card on to gain entry.

There’s a lot of stuff inside! Legendary Supply Boxes, blueprints, and mounds of amazing cash have all yielded a bevy of great goodies.

Once you’ve cleared the area, don’t linger — opposing squads will be more than glad to free you of your additional cash, so hurry out as quickly as possible and spend it at a nearby purchase station.

Bunker 11 is still the most challenging vault to access. Check out the next section for more info and walkthroughs to gain entry.

Bunker 11 will take a bit more effort to unlock. While the other 10 bunkers can be unlocked with a Red Access Card, the vault near the military facility will take you on a crazy ride around Verdansk, where you’ll be forced to listen to telephone conversations and put your Russian abilities to the test. Yes, it’s true.

The first step, as described by this kind guy on Reddit, is to examine the map for telephones that will send you a hidden message. Once you’re in the proper area, you’ll hear a dialing sound, so keep testing all of these locations till you hear those on the other end of the line speaking Russian.

Here, it gets a little tricky. The three numbers will correlate to 10 telephones scattered over the map, with each reflecting one of the ten numbers.

To continue, dial the numbers in the order given to you by the Russian spy over the phone. Once you’ve arrived, engage with each telephone before moving on to the one that reflects the right figure in the series.

If you head to the incorrect one by accident, the puzzle will reset, but don’t worry; you will be able to re-spawn the assignment by heading back to the original number.

Heading to these telephones will as well supply you with digit suggestions in morse code, though you shouldn’t need to do anything else if you abide by the instructions above.

Once you’re at the 3rd phone, go to Boneyard bunker 11 & claim your rewards — well deserved! If the signal isn’t green, you’ve probably made a mistake, and the bunker entrance will not open. Simply return to the first phone and begin again.

There will be a bevy of treasure and money, but there will also be a rare blueprint for a Mud Drauber SMB, a hidden server room, and a mysterious nuclear bomb that you can’t do much with at the moment. But who knows what a future upgrade could bring?

There are several loot sources in Warzone, but none compare to bunkers. These secret spots, which are normally guarded with a code, are regularly disputed by other players since there’s a potential that incredible riches await you inside.

What is the biggest Warzone bunker?

Bunker 11 is one of the most prominent bunkers in Call of Duty: Warzone. The bunker is brimming with treasure, hence the largest of them all. The keypad for Bunker 11 has been restored with the latest Warzone 1.28 version. Use the keypad to enter Bunker 11.

Inside Bunker 11, you will discover lots of treasures, the Mud Dauber MP7 blueprint, and a secret nuke, which will most probably play a role in a bigger Easter egg. We recommend opening the bunker in Plunder mode because you’ll be roaming about the map a lot and respawning will help you access this Easter egg much faster.

What’s the code to the bunker near hills?

To enter Bunker 1 in Warzone, you must first: Navigate to B7 on the Warzone map. The bunker lies southwest of Boneyard & north of the Go-Kart Course. It’s off the tarmac, so it’s a fantastic place to go (with a keycard) at the Train Station, Boneyard, or one of the Promenades.

Once you’re there, walk the steps down to the end of the corridor to discover the bunker door. Input the Bunker 1 code 97264138 to access the bunker in Warzone.

How to open a Boneyard Bunker with No key card?

The strategy is to just drive an ATV towards the entrance with a buddy sitting in the front — they’ll be the one vaulting through the door.
Once the ATV makes contact with the door, the one in front will go in, and you should be able to blow through it and steal anything you need from the bunker.

What’s the bunker code for headquarters?

The code is rather straightforward to put together. You have three codes, one of which is only 2 digits long. Your completed bunker code for headquarters should appear as below:

The initial component of the code will be 3 digits or three digits followed by a dash. The center half of the code is always two digits, while the last section is a dash followed by three digits. Luckily, it’s as easy as that. You’ve already done enough to arrive here.