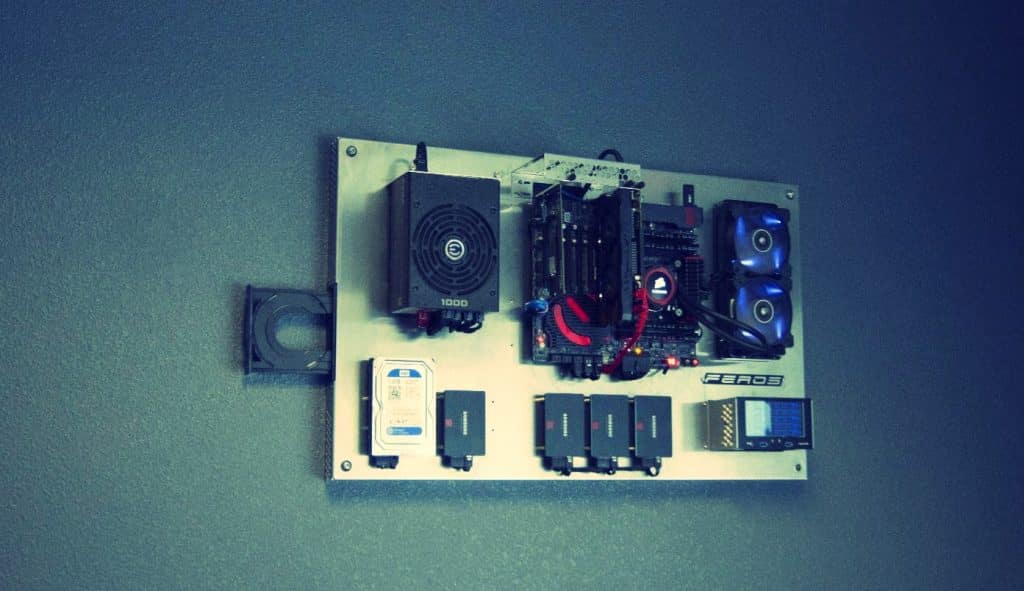 The idea of a wall-mounted PC isn’t new; it has been around for a decade now. Since PC building is truly an art and one of the purest ways of self-expression (It is), innovations in design and functionality are quite rampant.

But unlike insane PC builds, we’ve listed stuff you can get done, DIY PC builds.

Wall-mounting is just the one going through the revolving door right now. Computers and their housing have evolved in many ways, even more so now (Bitcoin mining can be an alternative source to keep warm).

We’ve had blocky cabinets and insufficient ventilation to absolute monster processors and graphics cards getting pushed to the limits using liquid nitrogen and behemoth wall mount PC cases with ample amounts of vents.

In this article, we’re going to go through –

This is not rocket science. If you find the idea of a wallputer enticing or simply do not have the desk space to accommodate a classical cabinet enclosure, then it’s actually a utilitarian option.

Depending on the kind of performance and sustainability that you want, wall-mounting requires a lot of planning and while worthwhile, can be expensive if not successfully micro-managed.

But hey, if you’ve spent the heavy dollars and are passionate about building a class setup, a wall-mounted computer can be a smart investment made.

With some basic carpentry knowledge, you can even make it a DIY day. Consult an expert if you want to go the distance and really make it one-of-a-kind, even Linus did.

Ideally, the kind of material that you will need will depend on the design preference that you have and the availability of said material.

Keeping that in mind, we have shortlisted three of those to make sure that you have all the optimal choices laid out in front of you.

The best part about designing a custom housing for your parts is that you also get to decide what pattern or alignment you want your parts in.

Of course, you will need the dimensions of your parts to get it done, but the entire setup will need more than that. The structure of your base material along with a good idea for the general construction behind it is a great start.

To start off, measure your mainboard along the wall that you’ll be mounting it to. Make a rough measurement, keeping in mind that your mainboard will need enough space for all of your parts to have proper breathing room, and the coolant tubing to run through (You will still need serious cooling.) Make sure that you leave at least 3-5mm of width on each side to account for error.

If you plan on placing your motherboard to the top left of your arrangement, take note that most of the wiring will run down the left channel.

If this isn’t something you’re looking for, we recommend shifting the position of the motherboard to the bottom left. Along with that, make measurements to drill holes for all your wiring that should ideally go behind and through the foundation.

To plan the distance of your studs, which is crucial once you begin the process of mounting, use a stud detector tool to measure the length that each will have. Now we can start the process of drilling.

After you’ve taken the basic measurements, we suggest accounting for additional components that you want to install, which will weigh down your overall build. Remember, the thicker, the sturdier.

If you want to have an RGB array, more tubing, or a couple of extra hard drives, make sure that your mainboard can support such requirements later on.

To start off, drill holes both into your wall and mainboard to line up exactly where they will mount. This goes without saying, but you won’t be able to do it after your setup is attached to your board.

Next, you want to measure and drill holes for your motherboard. This takes priority as any kind of error here will likely result in you ruining the main component. The formula here is to measure the thickness and size of the provided screws and drill accordingly.

After that, your PSU needs to be properly attached. Follow the same process although you may need custom screws and will most definitely require pre-drilling.

Your graphics card comes next. While normally the weight distribution of your card was offset and balanced by the enclosure you kept it in, here you’ll have to check your dimensions, invest in a vertical mount, and a riser cable for it to be connected to your motherboard.

Next on our list of priorities is cooling. Depending on what kind of cooling you invest in, the parts and final layout are going to be vastly different.

Some general tips to keep in mind are to use a heat gun to bend the tubes to your desired shape and reduce tube run length. Also, you don’t want your master liquid container anywhere near your GPU or processor or anything else that will heat up.

After the process of assembly is complete, take your mainboards, and begin mounting. You will need strong screws about 20-25mm longer than the length of the mainboard offset. At this point, line up the holes that you have drilled on your mainboard and your wall, and install the whole setup.

Afterward, check the whole build for stability, weight distribution, and measurement errors. And there you go! You now have a setup only a lunatic would go for, and we’re all for it.

Now that you’ve set up your own wallputer, let’s look at the wall-mounting of hall of famers across the internet.

I mean, we just had to talk about this one. Imgur user Marksmanguy showed off his custom build on the platform a few years ago. Just take a look at that beauty.

From the black and yellow Bumblebee aesthetics to the LED Transformers logo projector at the top, and the Stop/Start button to turn the PC on and off, to the sheer amount of dedication to craft such a marvelous masterpiece, everything about this build screams luxury, passion, and craftsmanship.

There’s an i7-5820k housed in an ASRock X99 mobo, 32 GBs of Corsair Vengeance sticks, the EVGA 1080 Founders’ Edition card, and yellow braided sleeves as tubing, this was as fancy as it got back when this was uploaded.

6. JalfreziJeff and the Blue Lagoon

Reddit user JalfreziJeff shared his custom wall-mounted gaming PC build on the internet, with plexiglass covering over the motherboard, the blinding blue lights, and the reflections off of the tubing, this is a masterpiece.

The build itself houses an i7-4790k inside a top-of-the-line Gigabyte mobo, with 2 sticks of Kingston HyperX Fury 16GB DDR3 memory

Along with that, the graphics horsepower comes from a Gigabyte 1060 6GB card. The power is supplied by a Corsair 650W RMx, and the cooling is with custom XSPC EX240 radiators.

The guys over at LTT never fail to amaze and inspire. With a custom-made hexagon alignment designed to be showcased at LTX 2017.

The initial LTT made design was perfected by BSMods and housed a beefy i7-7700k inside an ASUS Maximus IX Code motherboard, along with 64GBs of Corsair Dominator Platinum RAM and an ASUS Poseidon 1080ti graphics card.

Cooling was provided by EKBlocks and the power supply from a custom-made Corsair RM 1000x PSU fitted with a Thermaltake RGB fan. Absolute insanity.

A more modernist, high-end AMD build, Bitwit managed to make a metallic chic wall-mounted PC build that looks more like a Lambo than a PC.

Inside, he went for a Ryzen 9 5950x on a Gigabyte AORUS x570 AQUA motherboard, with a Phanteks Revolt Pro providing the power supply and the Radeon 6900XT graphics card.

System memory was provided by GSkill with their TridentZ Neo RGB 32GB setup and the cooling was obviously custom, along with a Black Ice Nemesis 480mm radiator sporting RGB Lian-Li fans and an Optimus Absolute Reservoir System.

All of this was housed inside a cabinet made for wall-mounting, the Thermaltake Core P5 TG Black Edition. Overkill.

As the man himself mentioned in the build video of this rig, JerryRigEverything is an enthusiast, and although this case is a little too outdated in comparison to some of our hall of famers, it’s still a great build that did its job, which according to him was for gaming and rendering.

He proved that not everything had to be top of the line for the entire setup to be absolutely gorgeous and powerful.

One of the oldest builds we came across was from Recoil P, with his TheRecoilMachine being mounted on a plexiglass plate. The blue theme with the light bouncing off the tubing and the clean black material is a thing of custom PC building beauty.

Possibly the cleanest wall-mounted computer setup out of all of these, FerosRigs designed multiple custom cases for their rig and settled on a rectangular mount with ‘wings’ sprouting from each side in a display of tech genius.

The build itself consisted of an Asus Rampage V Extreme motherboard with an unspecified Intel processor, 16GB DDR4 2400 Crucial Ballistix Sport memory, 2 GTX 780- EVGA SCs in SLI, along with the Asus OverClock panel, and EVGA 1300 PSU and Primochill cooling.

Well, there it is. Our wall-mounted PC build 101 on designing, building, and showing off your dream wallputer. We hope once the semiconductor drought is over and things go back to normal that there’ll be even better, crazier, and easier PC builds to get up and running! 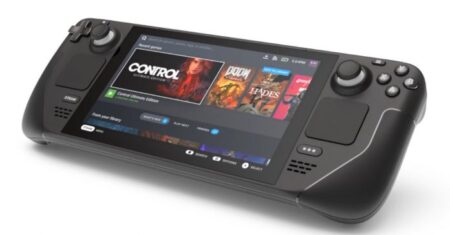 Steam Deck Gets Its First Transparent Shell Replacement by JSAUX