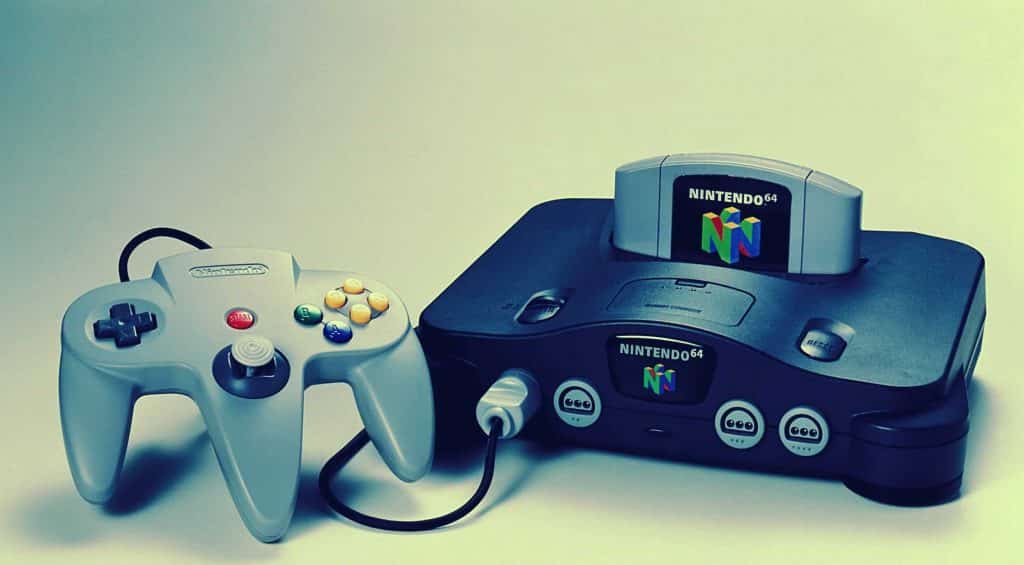 The Nintendo 64 is one of the most iconic and memorable gaming consoles in the history of gaming history. Released in 1966, the Nintendo 64 served as the company’s champion for the original ‘next-gen console’ wars.

This is right around where the video game industry started to change and evolve.

The console went up against the original PlayStation, now known as PS1, so it had tough competition right from the get-go.

Although the system always lagged behind its competition when it came to sheer numbers and sales, the Nintendo 64 was home to an array of classic games that left their mark on history.

We’re talking about Super Mario 64, The Legend of Zelda series, GoldenEye 007, Mario Kart 64, Paper Mario, and the first Super Smash Bros. These are some of the best N64 titles, and a number of these games later defined Nintendo as a company.

The Nintendo 64 is a rare sight in 2022. In its six-year lifetime, Nintendo shipped 32.93 million systems. To put that into perspective, Super Nintendo, the predecessor of Nintendo 64, shipped 49.10 million units. The PS1 sold a staggering 104.25 million units in its lifetime.

When you take those sales and the fact that the Nintendo 64 is over two decades old, finding one in pristine working condition is a tough task.

Even if you do find one, you’ll have to pay a hefty sum, not to mention the original cartridge games which are even more difficult to find.

Fortunately, the system is well-emulated, perfected over the years. A plethora of emulators for a multitude of systems allow you to play certain games, legendary games, such as Super Mario 64, Zelda, Donkey Kong 64, Turok & Goldeneye on pretty much any device.

The original specs of the Nintendo 64 are as follows-

As you can see, it’s exceptionally below what a modern computer packs inside. You don’t need any graphics card, huge RAM, or fancy CPU to run a Nintendo 64 emulator. In fact, you can emulate a Nintendo 64 even on Android devices.

A quick word on the legality of Nintendo 64 emulators, or any emulators for that matter. While building, hosting, distributing, and downloading emulators is perfectly within the bounds of the law, downloading ROM files and BIOS files is illegal.

Even though the original Nintendo 64 console has been discontinued for a few decades now, it still lives on with gamers who are looking for a more retro gaming experience.

One way to play games and get that fix is through emulators, and the N64 is one of the more well-emulated consoles out there allowing you to enjoy your favorite classic games on more modern machines like a PC or Android phone.

These emulators are going to give you the same experience playing the games that you love. Here’s a list of the best ones that will transport you back in time.

Project 64 is rated as one of the best N64 emulators around, easy-to-use, and operates with an open-source library.

Thanks to an active and dedicated community, Project 64 is regularly updated, making its name synonymous with Nintendo 64 itself.

The latest version of Project 64 is clean and free of bloatware. It uses a plugin-based architecture so you don’t need to reinstall the complete program just for one feature.

The emulator allows you to use USB controllers (which need to be mapped to an N64 controller), save drives that allow you to save your game files, and pick up right where you left off.

Some games even support high-resolution textures that allow you to play classic in high resolution.

One of the reasons why Project 64 is the best in the business is its multiplayer capabilities. All you really need to do is to plug in a controller and set it up on the configuration screen.

Since it has external controller support, you and a friend can play any game you like as long as you have the necessary ROMs BIOS files.

The best part of all is it’s a free version, so you don’t have to shell out money to get this emulator.

However, it’s not a smooth sail.

The only downside of the Project 64 emulator is its iffy audio experience, even with the latest version with multiple updates, it’s not as consistent as you would like it to be.

Although it’s something to be expected from an open-source software project, you’ll still get an excellent experience playing your favorite games on it.

It’s also not free from viruses, so just be careful whenever you’re going to download it. Just like other emulators. make sure to get it from a reputable source to save yourself from the headaches of dealing with unwanted malware and harmful files.

Project 64 is considered one of the best N64 emulators for PC and is also available on Android. At one point, it was listed on Google Play Store as well but swiftly taken down due to copyright issues.

You’ll need to download an APK for Android. However, the Android community isn’t as proactive as the Windows community, so there may be glitches and issues every so often.

As long as you’re on PC, Project 64 is an excellent N64 emulator with the latest updates.

Mupen64 Plus is another really good multi-platform N64 emulator. Installing and using it is a bit of a hassle as compared to Project 64.

But on the positive end, it delivers an uncompromised audio experience and fixes any small bugs that pop with Project 64. If a game doesn’t work on Project 64, the obvious solution is to boot it up on Mupen64 Plus.

It is capable of emulating most games, and it’s one of the reasons why it’s a popular emulator as you’ll be able to enjoy your favorite classic titles. Games run smoothly on it, there are a few that will work perfectly.

You get all the features that you need to run your favorite titles with an improvement in the audio experience.

The download and installation can get a bit messy since it doesn’t have any GUI or user interface. Instead, you need to use the command line.

You can install it on your own if you know your way around a command terminal, but the best way to install it without messing up is simply by following a tutorial.

That being said, it’s not the best when it comes to its front-end GUI as it’s a bit tricky to use compared to other emulators. You’ll have to deal with typing in commands rather than clicking on a mouse.

However, its compatibility with games is unmatched, if you can get through the tutorial, you’ll certainly be rewarded with one of the best emulator experiences.

Mupen64 Plus shines when it comes to cross-platform compatibility. While it’s the default option if you’re a Mac or Linux user, it’s a pretty good option for Android as well.

A quick shoutout to Mupen64 Plus FZ, the best Nintendo 64 emulator for Android. While Mupen64 Plus does work on an Android device, the FZ was built with mobile devices in mind.

The set-up is still a hassle, but once you’re past that, it’s a smooth sail onwards to the best Nintendo 64 emulator on Android. All the plug-ins and installations are also available.

Built on the Mupen64 Plus, the MegaN64 is the most popular N64 emulator on Android with over 1.5 million downloads. Where it differs from Mupen64 Plus or Mupen64 Plus FZ is its UI.

MegaN64 is easy to install and use and allows you to play Nintendo 64 games without any fuss. The loading times are extremely short and the whole experience feels snappy.

It’s also a free version so you don’t have to pay for anything if you feel like you want to play your favorite N64 game.

One of the strong points of the MegaN64 emulator is its compatibility with just about any game on the Nintendo 64 system. As long as you have the ROM files for it. Whether you want to play Super Mario 64, Mario Kart 64, or Tony Hawk ‘s Pro Skater 3, you’ll be able to run them with this emulator.

It’s not quite as feature-heavy as compared to the competition and lacks any external plug-ins. The pop-up ads are a nuisance as well. Support ceased a few years ago, but it’s still a good emulator to whip out some casual titles on the go.

When the support ceased, the game was taken down from the Google Play Store but it’s still available on the internet in the form of APK.

It is one of the best N64 emulators for Android out there, so if you’re looking to play your favorite retro games on your Android device, this is the one you should get.

You may have guessed by now, RetroArch is available on several platforms. You name it, they’ve got it! RetroArch is technically not an emulator.

Rather, it’s a front-end GUI where you can download many emulator cores to play a wide range of games.

Among one of those cores is libretro, a Nintendo 64 emulator based on Mupen64 Plus. RetroArch is extremely easy to use and navigate, with a UI reminiscent to that of the last-gen PlayStation interface.

Furthermore, there are a ton of unique features as well such as overclocking and more customization features that can’t be found on any other emulator. Overall, RetroArch is the best software if you use several emulators.

RetroArch comes with basic emulator features and it’s also packed with advanced ones that others don’t have. It comes with gamepad support and automatically configures it so you can play right away.

RetroArch is also an emulator that comes with a more polished user interface so you don’t have to waste time on it but allows you to simply play games. It also has blind accessibility features so just about anyone can enjoy playing their favorite games by downloading ROMs BIOS files.

On top of its N64 emulator capabilities, the free RetroArch emulator can also double up as one of your Nintendo DS emulators. Now you’ll be able to play your favorite Nintendo game on just about any device that you can run RetroArch on.

You can even install it on an Android phone by simply getting it from the Google Play Store as it’s still currently listed there. In fact, it’s considered one of the best N64 emulators for Android.

Nintendo 64 gifted us with a ton of memorable games that made our childhood a brighter time. The Nintendo 64 emulators are easy to re-experience those simpler times and enjoy the games that shaped the industry.

Fast forward to today, you’ll still be able to enjoy these wonderful games. They didn’t come up with newer versions of the N64 console.

But with emulators, you’ll be able to relive those times when you would simply sit down and start exploring new worlds with your games.

If you want to game with the best N64 titles, there’s no question that you’re going to need to get one of these emulators. It’s the only way to do it, especially if you don’t have your old machine running, and it’s also perfectly legal.

Since the console wasn’t quite heavily specced, it can be easily emulated on any PC or even mobile for that matter. So go ahead, get one of these as these are the best N64 emulators, and play along!