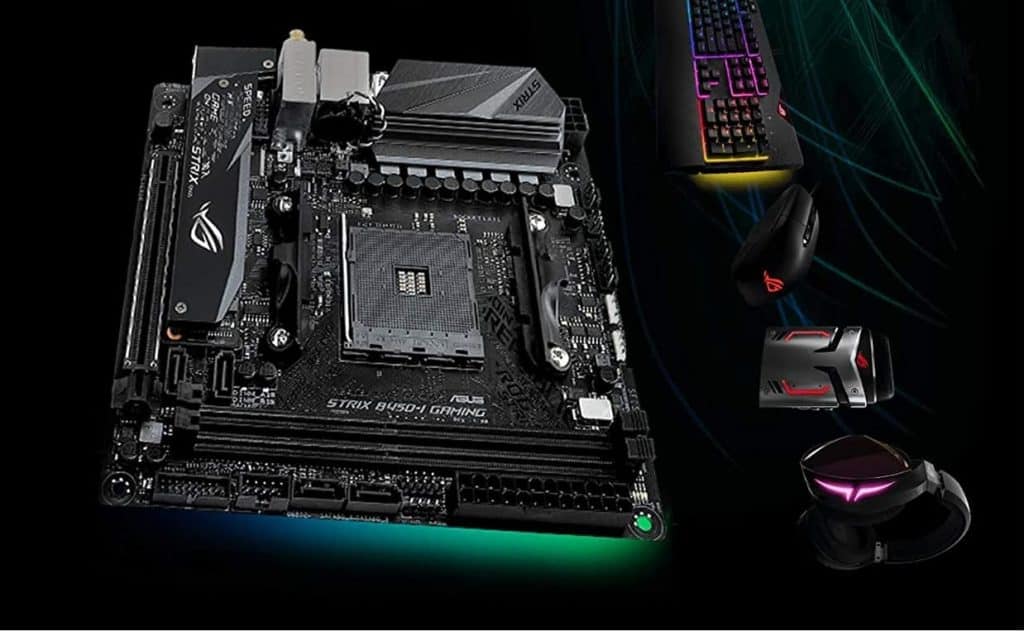 AMD has introduced the B550 and the more expensive X570 chipsets for their Ryzen line of gaming processors. However, for budget-oriented PC builders, B550 motherboards are currently not financially feasible. On the other hand, B450 motherboards remain an attractive and affordable option.

For this very reason, if you plan on building a new desktop on a limited budget, we recommend going for the B450 motherboard that suits your needs.

To help, we’ve decided to round up the 9 best motherboards with the B450 chipset.

Scroll down below to find out what we think is the best B450 motherboard for a particular budget or preference and why. The best budget B450 motherboard for ITX builds, the ASRock Fatal1ty B450-ITX/ac packs a lot of performance in its minuscule frame.

While most ITX motherboards usually either have to give up a lot to be affordable or otherwise be far too expensive than most people can afford, this ITX motherboard is able to compete with even more expensive X470 and X570 motherboards in terms of overclocking support and other features including built-in Wi-Fi and more.

Naturally, there are a couple of compromises. In this case, it’s the number of USB ports available on this board.

Then again, if you’re building an ITX desktop but don’t necessarily have a lot of cash to spare, you’d be hard-pressed to find better options.

Easily the best budget B450 motherboard on our list, the Gigabyte B450M DS3H doesn’t really skimp on features despite its affordable price point.

For system builders on a tight budget, the B450M DS3H gives you 4 DIMMs that support up to 64GB of DDR4 RAM to play with, along with two PCIe slots and a plethora of USB ports, including support for USB 3.1 and even PCIe 3.0 for NVMe SSDs.

You might not get Wi-Fi nor Bluetooth functionality, as well as other useful added features, but at its asking price, you can’t really ask for much. This is especially true when you’re already getting a lot.

You’d be forgiven for thinking that the Asus ROG Strix B450-F motherboard has an X470 or X570 chipset. It certainly does look the part. But, believe it or not, it’s a B450 motherboard with a B450 price.

Mind you, this B450 isn’t just all looks. The VRMs and chipset heatsink that you see are all very effective at what they do. They might look great with the lighting effects, but when overclocking, you can rely on them to keep everything cool and performing well. Also, thanks to XFR and AMD’s Precision Boost, overclocking with this motherboard is easy and convenient.

For all of your audio needs, the motherboard has SupremeFX audio to keep audio free from distortion. To guarantee clean and clear audio output, it’s also equipped with Nichicon audio capacitors.

All in all, this is the best AMD B450 motherboard for gamers who plan on upgrading their set-up in the future.

Sold just for a little more than Gigabyte’s entry-level offering we recommended earlier lies the Gigabyte B450 Aorus M, which is a micro-ATX motherboard that looks and plays the part of a high-end motherboard.

True to this, it supports 2-way AMD CrossFire, as well as support for M.2 SATA SSDs and a PCIe Gen3 x4 NVMe SSD.

More importantly, this motherboard comes with tons of features courtesy of being a part of Gigabyte’s gaming-centric Aorus line of motherboards. This includes functions like RGB Fusion support, as well as Gaming LAN. It even comes with 8-channel onboard audio, an M.2 heatsink to keep M.2 SSDs cool, and even EFI Dual BIOS for overclocking.

While we definitely don’t recommend the Aorus M for system builders looking to push the limits of their processors, it’s not hard to recommend this for people who want to build a nice-looking micro-ATX rig on the cheap.

Getting the MAX treatment gave the popular MSI B450M Mortar an increased bios size and a much better bios UI. However, that’s not the only improvement it received, because its VRMs have also been improved, and it comes with as many as 14 USB ports, with 8 USB 3.2 ports in total available.

For all of your RGB lighting needs, the MSI B450M Mortar MAX supports MSI Mystic Light.

All in all, the Mortar MAX is a decent offering for those looking for a decent motherboard for overclocking Ryzen 3 up to Ryzen 9 processors.

If you’re building a full-on RGB mini-ITX build and don’t really plan on overclocking much, the ASUS ROG Strix could be the best B450 motherboard you can have.

Feature-wise, you get plenty on this small motherboard solution. This includes RGB lighting, dual M.2 slots, plenty of power delivery available for your processor, on-board Wi-Fi and even SupremeFX audio circuitry.

The lack of heatsink cooling and the single SOC phase are reasons why we don’t recommend this for overclocking.

Outside of this, the B450-I is an easy recommendation for system builders who have the budget.

Offering many features usually only found on the more expensive X470 motherboards, the motherboard has a host of useful functionalities. This includes Wi-Fi, plenty of RGB lighting with a LED extension cable included along with the package, and excellent VRMs for optimal overclocking performance.

Paired with a proper cooling solution and this B450 motherboard will let you push your processor to its absolute limits at a more reasonable price point.

When it first released, the ASRock B450m Steel Legend was considered a steel. Months later, the price has gone down, and its value has only gone way up.

How so? Well, for starters, it’s affordable, and, as far as AMD CPUs go, it’s one of the few that can actually OC its memory up to 3533+Mhz, allowing you to squeeze the most performance out of your Ryzen CPU.

This fact alone is enough to warrant an inclusion on our list.

Of course, this is not all that the B450M Steel Legend does. It supports AMD Quad Crossfire technology and has a sleek design with just the right amount of silver accent with a dash of RGB lighting.

Memory overclocking isn’t the only thing that the B450M Steel Legend has going for it either. You’ll enjoy overclocking your Ryzen CPU with it just fine too, allowing you to build a powerful Ryzen-based gaming PC without punching a hole in your wallet.

The MSI B450 Gaming Plus Max is essentially a stripped down version of the Gaming Pro Carbon AC.

Looks-wise, it’s more simple. The RGB is not as prominen and it doesn’t have a DisplayPort nor Wi-Fi. But, it does keep the more important parts, including a decent heatsink and VRMs for overclocking performance. This is especially useful when the motherboard supports memory overclocks up to 4133Mhz.

For AMD processors, memory performance is king, and with support for up to 4133Mhz, this is the best B450 motherboard for overclocking.

MSI B450 Gaming Plus MAX Features

Even today, not all B450 motherboard ship with a BIOS that supports Ryzen 3000 processors right out of the box. Most do, but you’ll want to confirm with the merchant just in case. Also, if it so happens that you receive a motherboard with an older BIOS, you can update the BIOS yourself by taking advantage of your motherboard’s BIOS flashback feature.

If, however, the motherboard doesn’t have this feature, you’ll have to find an older supported Ryzen CPU so you can update it yourself.

A reputable local shop can also help you out with this for a small fee.

Are B450 Motherboards and Ryzen 9 Processors Compatible?

If you really insist, we suggest getting the best B450 motherboard, like the MSI B450 Pro Carbon AC or the MSI B450 Gaming Plus Max, both of which should support Ryzen 9 processors just fine at stock speeds.

Again. Emphasis on the stock.

To get the most out of your Ryzen 9 processor, we recommend matching it with an equally capable motherboard, preferably of the X470 or X570 chipset.

The B450 chipset remains king for value-oriented AMD builds and things are likely to remain that way for the foreseeable future. The jump from PCIe 3.0 to PCIe 4.0 doesn’t yield noticeable real-world performance results just yet for the average user to benefit from them, especially since they come at a premium.

With that said, buying the best B450 motherboard based on your budget and preference remains the best course of action right now.

Hopefully, you’ll put our tips and recommendations to good use. This way, you won’t end up wasting your money on a B450 motherboard that doesn’t have the features that you want, or more importantly, need.