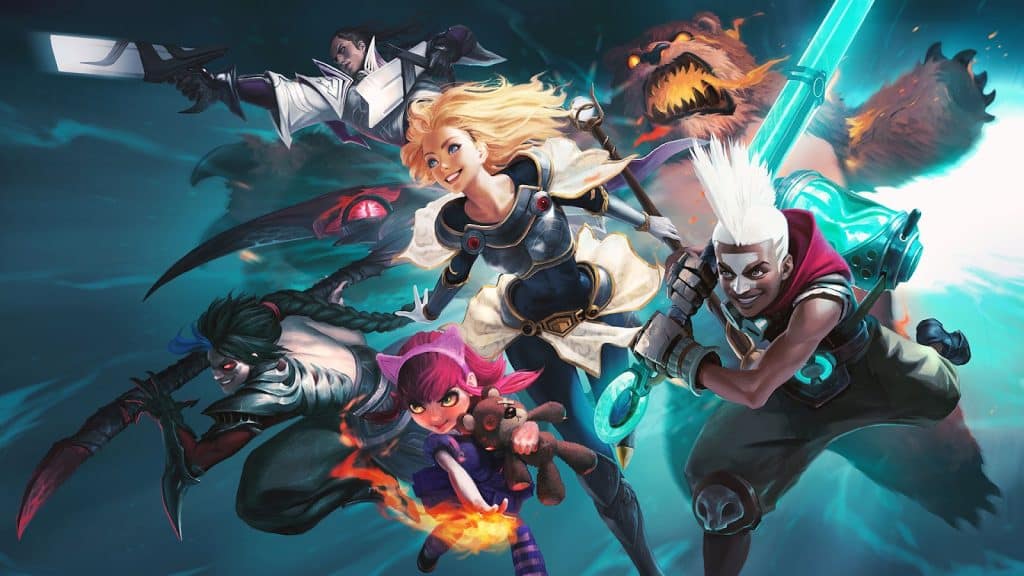 Ultra Rapid Fire or more commonly referred to as U.R.F (or ARURF) is a beloved game mode in League of Legends (LoL) and it’s finally available again on the PBE.

Initially introduced in 2014 as an April Fool’s event, U.R.F turned into one of the most successful modes in LoL.

Many players have been waiting patiently to get back into U.R.F with all its weirdness, quick-paced action, and utter chaos in the Rift.

And since U.R.F is back in the game rotation, it’s time to rank all the best Champions with our League of Legends URF Tier List.

We’ll be showcasing all Champions in URF and where they rank in the latest meta on a scale of S+ to D. All the champions will be ranked according to their stats including Win Rate, K/D/A, Pick Rate, and Overall Viability.

But before finding the most OP URF Champs, for newcomers to URF in League of Legends, here’s a quick rundown on the key differences to the standard 5v5 mode.

In short, U.R.F is everything you want in a League match without having to trudge through long 40-minutes  to 1-hour matches, and a twist. One of the biggest differences in URF is the shorter matches, ranging from 20-25 minutes.

URF also has two variations of game modes, either an All Random or Blind Draft. But what makes URF truly special are the adjustments in-game and how they greatly differ from the standard 5v5 mode.

All players receive a modified aura which throws in a few unique features into the mix. Two of the most noticeable modifiers include a 300 Ability Haste which gets your skill/item cooldowns a significant 75% reduction and -100% energy and mana costs when casting spells/abilities.

Just with these two modifiers, URF in League of Legends transforms itself into a fast-paced MOBA brawler with none of the downsides. You can do things in URF that would never be possible in a standard 5v5 and that’s what makes the game mode so fun to play.

But there are a few more additional Buffs in LoL URF that shakes things up including:

There are a couple of other buffs, but these are the most important in the overall gameplay. As you can tell, all these features will undoubtedly give you a change of pace in LoL while keeping to its core gameplay loop.

Plus, it makes some Champions just so much better to play.

And now that you know what you’re getting into with URF, let’s get straight into our LoL URF Tier List!

With each patch that LoL gets, the meta is ever-evolving with new buffs/nerfs to the whole roster. A Champion that ranked highly in a URF Tier List 9.21 (e.g.) will probably not match up to top contenders in the latest patched-up LoL URF Tier List.

And while certain characters are bound to be ranked highly as the best URF Champ, some Champions make the cut in our S/A-Tier list purely for being fun URF Champs to play.

But for our S+-Tier, you can be assured that these are the best of the best in URF right now. As mentioned earlier, we’ll be taking into account 4 key factors in the Tier List:

We’ll rank Champions according to an S+ to D scale, with D being the worst heroes to pick in URF. But don’t worry, even if your favorite Champion happens to rank lower in the Tier List, that just means they’re not as popular in the meta right now.

If you’re good enough with a B/C-Tier Champion, you could beat out a newbie S-Tier for sure. It’s just harder to do that with a B-Tier vs an S-Tier who’s mastered the character thanks to their viability with buffed skills/item builds/etc.

S+-Tier Champions are the best of the best in U.R.F right now. All of the Champions listed have very high win rates, pick rates, and high K/D/A ratios. Not to mention they’re some of the most played Champions in U.R.F as well as the most banned.

Zed and Fizz in particular have over 50% ban rates and goes to show how ridiculously overpowered these Champions are right now. If you were looking to take things seriously in U.R.F playing and learning one of these Champions is a sure-fire way to victory.

If you manage to pick them, that is.

The S-Tier Champions are the best of the rest; not as overpowered as S+, but much better than A/B-Tier. These Champions are powerful and are greatly benefitted from the modifiers in U.R.F. If none of the Champs in the S+-Tier tickled your fancy, I highly suggest picking from one of these characters to master.

They’re dependable, powerful, and can pull off downright dirty plays. You’ll have quite the time facing off against tougher, more skilled S+ Tier players but you’re at least able to hold your own with these Champions.

The A-Tier Champions still have plenty to offer with useful abilities/skills in U.R.F but are lacking in some ways. These characters may not be as powerful as higher ranked S+/S-Tier Champs but should be more than capable of fighting off lower-tier characters.

But if you were highly skilled with these Champs, you’re still capable of dominating matches if the situation’s right. The A-Tier is still considered better than average in terms of Win rates (around ~55%), average K/D/As, and pick rates making them popular in U.R.F.

You could do better, but there’s still plenty to work with here.

The B-Tier Champions are run-of-the-mill and are average in most cases. They’re okay to use but will struggle against better, higher-tiered characters. Their win rates also border on mediocre, with most staying around the 50% win rate range.

You could do worse but don’t expect anything too special. You’ll be able to pull off some cool plays but might get stomped by an S-Tier relatively easily.

They’re not bad but not very good picks either. In most cases, these Champs aren’t faring as well in the current meta and mostly have better counterparts. If you do end up getting one of these, I’d suggest trying your luck with a Reroll.

The C-tier of characters are some of the harder ones to recommend because they’re not entirely horrid, but they’re close to it. These are some of the most underperforming Champions in the U.R.F game mode right now and it’s best you avoid them if possible.

Most characters in the C-Tier average a 45% win rate and fairly low K/D/A ratios. They’re not very powerful or versatile so they’re not ideal picks in U.R.F.

Not to mention some characters here just don’t take advantage of the in-game modifiers well enough, ranking them lower.

The D-Tier Champions are the worst in U.R.F and should be avoided without question. They perform very poorly in the game mode and aren’t viable at all. Some Champs on this tier have a win rate as low as 35% which is just not going to cut it for most players.

Almost, everything about the Champions is lacking from their power, overall versatility in situations, less powerful builds, etc. You’re better off leaving your keyboard and taking a walk than winning with these characters.

If possible, reroll immediately and aim for anything better than a B-Tier character if you plan on winning any games.

And that’s our Tier List of all Champions in U.R.F right now. An important thing to keep in mind before blindly choosing a champion just because it ranked highly; they’ll play only as well as you’re able to.

Just because S+/S-Tier characters are the best in the game right now, if you’re not familiar with their builds, skills, playstyle, or role (Solo, Mid, Jungle, Bottom, Support) you’re probably not as effective in-game as other players.

But luckily, U.R.F is a great mode to learn new characters thanks to the quick 20 minute matches. Take the time to learn up new Champions you haven’t played before and take them to U.R.F. I promise you’ll have a laugh or two.

Now that we’ve gone through the Tier List, here’s a handy little list of some Champions and builds for U.R.F. Just in case you’re looking to try something new and aren’t sure what items they should be using.

Ahri is one of the S+-Tier Champions in U.R.F and for good reason. She’s also one of the most recognizable LoL characters so this doesn’t come as much of a surprise. Ahri excels at being a high burst damage mage with solid escape capability.

In U.R.F, Ahri’s skills are very powerful thanks to the lowered cooldowns resulting in multiple spammed skills in a matter of seconds. You can chain attacks easily by Charming, using Fox-Fire for auto-target attacks, and Orb of Deception for the kill.

All her skills (except for her Ult) will cool down in about 2-3 seconds in U.R.F which makes Ahri deadly.

It’s also super easy to clear creeps thanks to almost limitless Orb of Deception casts making her suited for the Mid lane. But she’s capable of going Bottom as well if the situation calls for it.

For her item build here’s what we recommend –

You can substitute some of these items depending on your preference with the Void Staff or Banshee’s Veil but this is one of the better builds for Ahri right now.

Tryndamere is an A-Tier Fighter in U.R.F and it’s easy to see why. His skills are well-suited for quick-paced skirmishes and he’s a well-rounded fighter with good survivability.

With U.R.F’s modifiers, Tryndamere is basically a Beyblade with a 3-second cooldown for his Spinning Slash. Rush enemies with the Spinning Slash,  use Mocking Shout to lower enemy attack damage, and use Bloodlust to heal and get back in the fight.

If you play him right, you’re practically invincible.

In terms of his item build, it’s best to focus on increasing Attack Speed, Damage, and Crits (Chance & Damage). Here’s a solid item build for Tryndamere –

Miss Fortune is an A-Tier Marksman in U.R.F with solid damage output and chase down capability. I’d say her skills aren’t the best for U.R.F but has plenty of utility when you’re in the thick of it.

In U.R.F, Miss Fortune will be casting Double Up relentlessly, making her annoying to guard against in a group fight. Set a trap with Make It Rain, chase down with Strut’s movement speed and attack speed bonuses, and Double Up when necessary.

Miss Fortune in U.R.F should typically follow this skill order – Double Up > Make It Rain > Strut. But depending on your playstyle and the situation, Make It Ran and Strut are interchangeable.

Warwick is another A-Tier Fighter/Tank combo who can be devastating in the late-game thanks to his innate healing capabilities and defense.

His skills are attuned to killing enemies and staying in the fight as long as possible. Find enemies with low health with Blood Hunt, use Jaws of the Beast for additional damage, and get reduced damage from Primal Howl in group fights.

Chase down the retreating Champions with Infinite Duress and you’ll be good to go.

Warwick’s skills should be upgraded in the following order – Jaws of the Beast > Blood Hunt > Primal Howl.

For his items, you should focus on maximizing Health, Armor, Ability Power, and Attack Damage. Here’s a great build to follow –

And that’s all folks! We’ve gone through the whole roster of Champions and found out exactly which ones work in the esteemed U.R.F mode. Take the time to learn these Champs to have a better shot at victory in U.R.F!