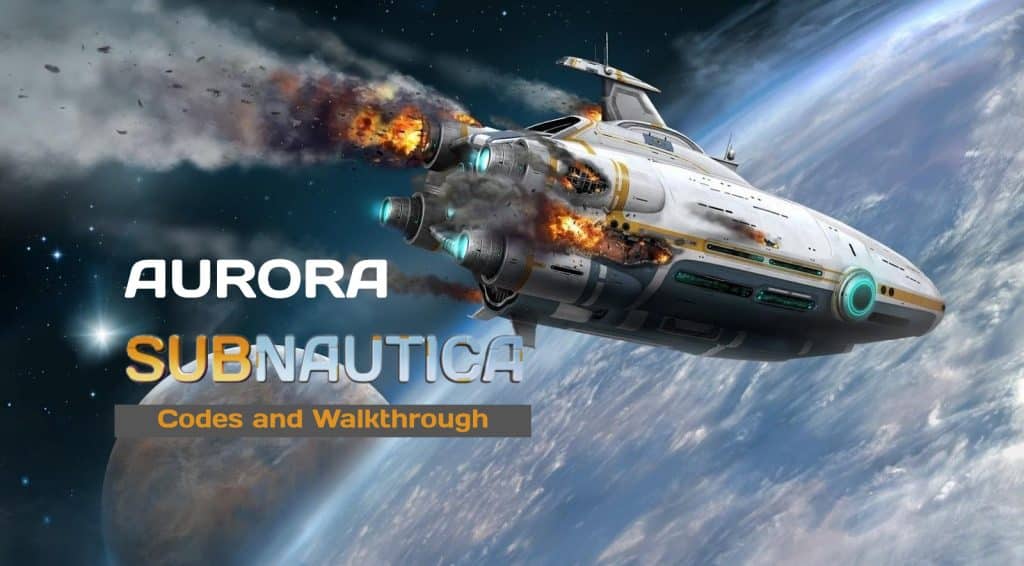 Subnautica begins with the player character crash landing in the endless oceans of Planet 4546B.

When the door of Lifepod 5 pops open and the player first peaks outside, they are greeted with miles upon miles of shimmering blue.

And one landmark. Their crashed ship, the Aurora.

As soon as I gained control of my character, all I wanted to do was head straight towards the Aurora.

It’s huge, it’s cool looking, and it’s tantalizingly close and yet just out of reach.

I’m sure the first time many players experience death in Subnautica it’s trying to head to the Aurora before they’re ready.

Thankfully, the Aurora doesn’t have to stay out of reach for too long.

But you will need to be prepared.

So, carry on for our Subnautica Aurora codes and walkthrough with everything you need to know before you board.

What Is the Aurora?

The Aurora was a newly built Alterra Long-Range Capital ship. It was later sent to build a new PhaseGate in the Ariadne Arm.

Unbeknownst to most of the crew, it was also on a secret mission to look for any survivors of the Degasi crew.

At the beginning of the game, the Quarantine Enforcement Platform which protects planet 4546B shoots the Aurora out of the sky.

The crew tried to escape but only one was successful, Ryley Robinson. It would appear all other hands were lost.

So, the door codes in Subnautica, what are they?

For these doors, you’ll need Subnautica key codes. They can be found in PDAs in the wider world and in Aurora itself.

But let’s face it, finding these Aurora codes can be a major pain.

Luckily, you can find all Aurora’s codes below:

But stop right there! Before you rush in, you need to prepare yourself!

With the number of hoops you have to jump through just to get inside, you might ask yourself if it’s worth even going to the Aurora.

After all, it’s basically just a high-tech graveyard now, right?

First, the Aurora is a treasure trove of game lore.

You’re going to be spending a lot of time playing Subnautica so it would be nice to know what’s going on right?

The Aurora is full of PDAs that flesh out the world of Subnautica. You’ll find out more about Alterra corporation and what life is like in the future.

The ship is also full of clever world-building through environmental storytelling. Especially once you get to the crew’s quarters.

Plus, many of these PDAs contain Subnautica key codes, like the Subnautica Captain’s code.

The Aurora is chock full of loot. You will be doing more than one trip back and forth if you want to loot everything.

There are equipment and vehicle fragments everywhere. These include –

How useful you find these depends on how far into the game you’ve gotten. You’re likely to have the Seamoth and, perhaps, the Propulsion cannon already.

However, you’re unlikely to have the Cyclops or Prawn Suit yet.

The Aurora also has a handful of useful upgrade modules lying around.

The Aurora is also full of useful everyday items. It is littered with crafting materials, batteries, and consumables. You’ll probably find yourself doing repeat trips to grab everything.

Third, the Aurora has quite a few cool cosmetics you can use on your base. The minimalist/ hyper-modern style can make player-built bases feel a little stark.

Thankfully, you can loot some cool posters and decorations from the Aurora that you can use to brighten up your base.

Fourth and perhaps most importantly, visiting the Aurora is vital to finishing the game.

The Aurora is obviously out of commission, so you’ll be needing a spaceship.

The blueprints for the Neptune Escape Rocket can be found in the Captain’s room.

Don’t think visiting the Aurora is opening up the end of the game, though.

You’ll still need to build the rocket (not easy) and disable the Quarantine Enforcement Platform (definitely not easy.)

As mentioned earlier, many players want to rush straight to the Aurora.

However, doing so unprepared is pretty much a guaranteed way to become fish food.

It’s not just a matter of finding the Aurora Subnautica codes and diving straight in.

You’re going to have to slow down and wait a while.

When the game first starts, the Aurora is mostly intact, but the engines are leaking radiation.

Unsurprisingly, radiation is harmful to you. So, you won’t be getting close until you find a way to protect yourself.

Even worse, the Aurora is a ticking bomb. After a few in-game hours, it goes boom.

If you’re anywhere near it when this happens, you’re quite literally toasted.

Some players worry that the countdown given to you by the PDA means you only have a limited amount of time to get onto the ship and loot it before everything is lost.

Fortunately, the opposite is true. The game is giving you a few days to get used to the game mechanics and gather everything you’ll need for your excursion to the Aurora.

We would advise you to have the following items –

​​Subnautica: How to Get Into The Aurora

First, you’re going to have to wait for the ship to explode.

If you attempt to cheat your way on board with Subnautica codes, it won’t work. Teleporting to the Aurora before she blows will just trap you in a buggy hellscape.

There are two roots inside.

You can approach the torn-up front section on the right side of the shore area. There is a gap behind a floodlight you can enter through.

It’s blocked by crates, so you’ll need the Propulsion Cannon. This leads you straight to the laboratory.

Or you can use the ramp and enter through the main corridor. This is my preferred route.

Just be aware that Leviathans patrol the exterior of the ship.

If you don’t have the Stasis Rifle, you’ll have to creep past.

A good tactic is to sneak up to the ramp with the seamoth and then park in such a way that the moth is blocking the ramp.

This should stop you from getting any unwanted Leviathan visitors.

There are caves, alien monuments, crashed pods, and bases all over the place ripe for exploration.

But personally, my favorite area is the Aurora. I just love it for its environmental storytelling. And of course, loot.

It can be a bit of a maze, and unfortunately, there is no Aurora map in Subnautica but exploring is half the fun.

Hopefully, you find the above guide useful so that you can get exploring as soon as possible.