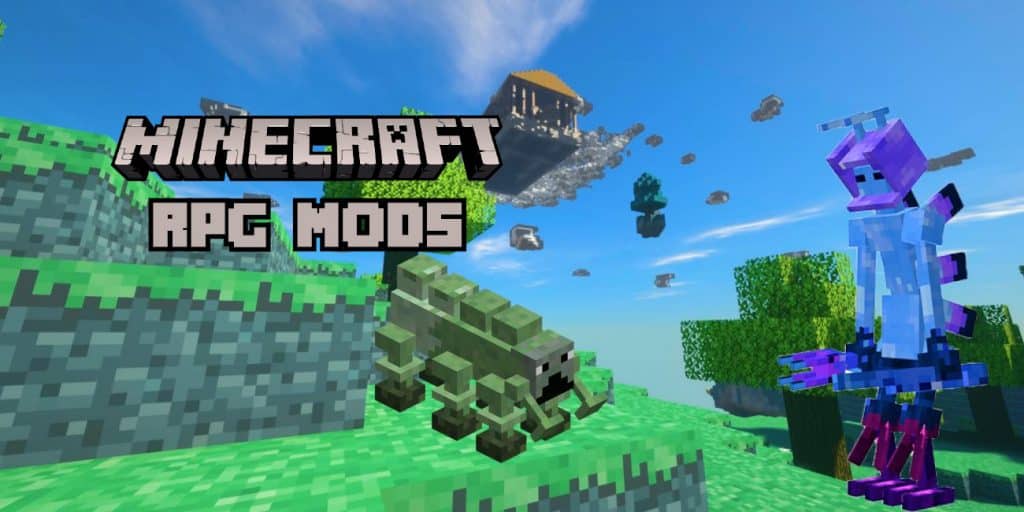 Minecraft is a sandbox survival game with a little bit of adventure and RPG style blended into it.

With the help of many Minecraft mods, you can fully experience the RPG aspect of Minecraft just by a few simple steps.

In this article, we will cover the top 10 best RPG mods for Minecraft.

First on the list is the Dungeon Crawl mod. You may know the term Dungeon in Minecraft and they’re poorly designed with just square rooms, a spawner, and some chests with loot, that’s it.

But how about epic Dungeons with many more spawners, traps, and better loots?

Dungeons in this mod are mainly in the tower shape exposed on the ground. But the more you go down, the more dangerous it becomes, and of course the better the loot is.

And not to tell the way dungeons are generated is supernatural since they blend in with the surrounding terrain. Also, Dungeon Crawl is compatible with other mobs so you can have a dungeon with custom creatures as well!

If you’re bored of Minecraft content, Apotheosis can help you by adding several new contents and focusing on improving the Minecraft vanilla experience. Content is divided into 6 different categories such as Enchantment, Deadly, Garden, Potion, Spawner, and Village modules.

This is one of the rare Minecraft mods that has an in-game manual book that you can craft with a book and a gold ingot. It’s easy to follow every single new block and item with it.

Also, Apotheosis can be installed with Enchantment Descriptions and Just Enough Items (or Not Enough Items) mod if you prefer a better way to keep track of the new items.

Ever thought of civilization in Minecraft? Although Villagers in Minecraft is getting updated frequently, there is something still missing. What if you can interact with the villagers and build a relationship with them?

MineColonies improve the villager by classifying them into different classes like Builders, Farmers, Foresters, Miners, Fishers, Bakers, Guards, Cooks, Couriers, Composters, Animal Herders, and a lot more! With their abilities, they can help you to build a great empire!

Not only add new villagers, but MineColonies also contain new items and blocks that you can use to decorate your town or use as a workplace for the villagers. With that being said, in this mod, the limit is your imagination!

It’s not an RPG game when you don’t have any kind of magic and spell, right?

Ars Nouveau solves that problem by adding several new spells to the game, which you can craft and use on your enemy. With this mod installed, magic is fully customized under your hand!

Ars Nouveau also has a lot of great features like magical artifacts, rituals, book guides, custom baubles, and trinket slots. With enough power and mana, you can just destroy an entire chunk all the way down to bedrock, or just simply light up the cave.

Most famous RPG mod of all time, with over 37 million downloads, Ice and Fire: Dragons is a must-install mod if you’re looking for an RPG mood in Minecraft.

While wandering around the world, you can find dragon nests with chests and gold all over them. It’s not easy to get since there will be dragons around.

Currently, you can find Fire, Ice, and Lightning dragon in this mod. Dragons in Ice and Fire: Dragons have custom models and animation. They can also fly high up in the sky and throw fire/ice at you so it will be a tough battle.

If you manage to defeat a dragon (or find a dragon corpse), you can collect their breath and bones to craft powerful and cool-looking armor and weapon!

If you’re a fan of third-person perspective in Minecraft, you know how bad it is when you press F5 and it just only changes your camera angle.

With Epic Fight Mod installed, you can experience the fighting style of a true warrior, just like Dark Soul and other RPG games.

The control in this mod is fully customizable and easy enough to learn. It also provides new abilities to weapons and armor such as stun, weight, or armor ignore. And do not forget about the combo and new weapons such as the dagger, greatsword, katana, knuckle, longsword, spear, and the Tachi.

PlayerEX is an important mod for RPG experience in Minecraft since it adds attributes, skill points, and a new leveling system to the game. You will have five different attributes: Constitution, Strength, Dexterity, Intelligence, and Luckiness.

You can open your character panel to see your level, available skill points, attributes, and a lot of other stats like health, armor, damage, lifesteal, evasion, gravity, resistance, movement speed, and more! The only limitation of PlayerEX is it only available on Fabric.

As its name, the RPG-Hud mod completely revamps the hud of Minecraft to make it feel more RPG. The health and hunger bar is now moved to the top left corner of your screen, along with your face.

Buff and inventory are now more visible since they’re bigger and have a transparent background behind them.

RPG-Hud also makes the armor durability visible on the screen so you can easily keep track of them. Another great feature of this mod is you can understand other mobs by providing a new GUI when you’re looking at them. This new panel contains the mob name, model, and even a health bar count.

Mowzie’s Mobs add several new boss creatures into Minecraft with unique models, textures, abilities, and even rich AI that can make the game way harder than before.

Until now, this mod has only 8 new creatures but still, they’re well developed and can improve your RPG experience in Minecraft significantly.

You will face a big guy with tough armor and a big axe called the Ferrous Weoughtnaut, a dangerous plant name Foliaath, or the dangerous creature in the ice biomes – Frostmaw.

Enough on land feature for an RPG game, right? It’s time to add some news mobs and content to the underseas!

First of all, Aquamirae add one new biome called Ice Maze to the game. This biome has unique terrain, ambient, music, sound, and even custom particles within it.

If the deep ocean in Minecraft is too easy for you, this mod adds 6 new unique creatures to the game like the Anglerfish, Maw, Mother of the Maze, Tortured Soul, Golden Moth, and a boss mob – Ghost of Captain Cornelia.

Each of them has a unique model and ability that can make your underwater life become a nightmare. Besides mobs and biome, Aquamirae also provides a bunch of new armor sets and items that fit so well together.