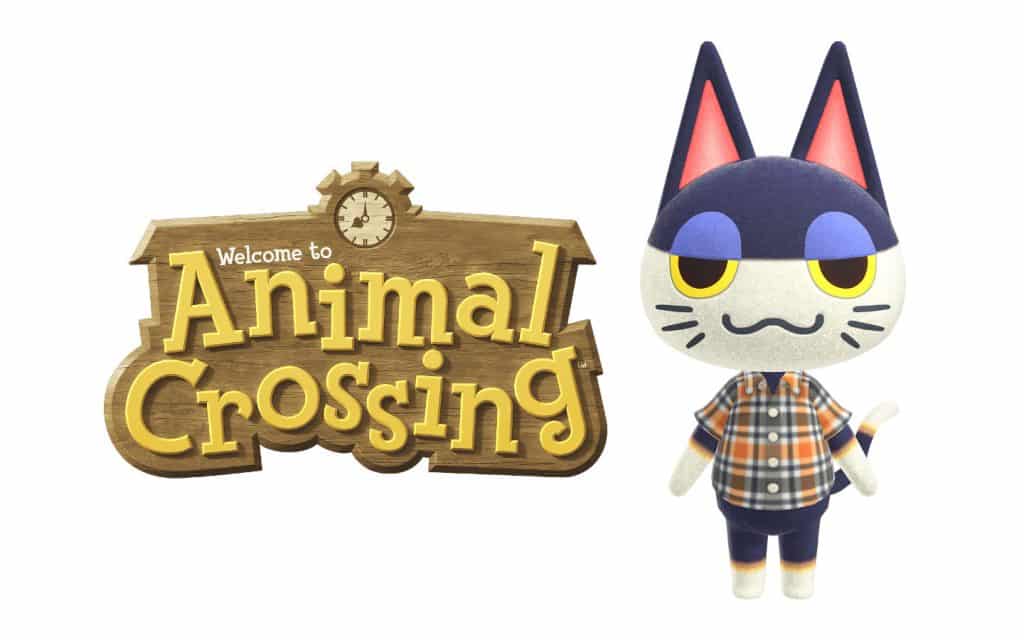 From his expression, what do you think he’s thinking? Cat things, probably.

If you want to know more about Punchy, then today’s Punchy Villager Guide is for you. Ready the cat treats and pats!

Who is Punchy in Animal Crossing?

Punchy is a cat villager with a Lazy personality. He was in the first localized Animal Crossing game and has been in all the games since then, with the exception of Doubutsu no Mori.

His recent appearance is in New Horizons.

He celebrates his birthday on April 11th, and thus has Aries as his star sign.

Punchy’s English and Japanese names have curious meanings and origins. His English name, Punchy, might come from the fact that you look a bit dazed or groggy after getting punched. Binta, his Japanese name, means “a slap in the face”.

I guess you’ll look a bit muzzy like Punchy when you get hit. But who would even try to hit this precious cat?

Punchy’s cat fur is mostly dark blue and white. His head is divided horizontally into two colors, with the top half and the ears colored blue and the bottom half in white.

His body is also blue, with white tips on his arms, legs, and tail. There’s a thin dark mustard yellow color between the blue and the white, however. This makes his body fur look like clothes.

His eyes are half-closed, giving him a laid-back vibe. His eyes also have bright yellow scleras and his eyelids are a purple color. His mouth is in a typical curled cat mouth expression, with notable whiskers.

Punchy’s outfit has changed a lot over the years. In the first Animal Crossing game, he wore a Cherry Shirt. In the next couple of games, he sported a Gray Tartan shirt. In New Horizons, his default outfit is a Madras Plaid Shirt.

His catchphrase is a bit silly. He says “mrmpht” a lot, and it sounds like random cat noises made when licking or trying to cough up a hairball. Whatever it is, it suits Punchy’s silly Lazy villager personality!

The defining traits of Lazy villagers are their love for snacks, fondness for bugs, and their preference for taking the easy route and napping.

When he’s hungry, he’d definitely tell you, he won’t hesitate to share what his bug friends whispered to him last night, and you’ll definitely find him napping somewhere!

A lot of players have used the time they caught their Punchy napping outside as a perfect photoshoot opportunity.

Look at how peaceful he is. Punchy definitely knows a thing or two about cat naps.

Punchy’s interaction with the player will mostly be sweet as well. They will always be happy to see you, will tell you that they saw you in their dreams, and will cry if they haven’t talked to you for a long time.

Lazy villagers are the male counterparts of Normal villagers, so they are sort of the same with the sweetness and pleasantness, but with an added funny twist for Lazy personalities.

Make sure to check their letters to see their delightful and goofy sides!

Punchy is always curious about the thoughts and opinions of their neighbors. When they find something cool, they will immediately fawn over it and ask for a quick lesson.

They’ll ask their Big Sister friends how to do certain things, like be cool or intimidating.

But because Lazy villagers can be a bit silly, Snooty, or Cranky villagers might get a bit upset after talking with them.

Vivian, it’s not Punchy’s fault that he doesn’t know what J is in PB&J! Give this cute cat a break!

Punchy’s house exterior has a simple modern-looking design. The top is a Gray Striped Roof, with Cream Panel Siding walls, and a White Wooden Door.

Punchy lives a simple lifestyle as well, as shown by his interior design choice. His walls are plain blue with the Blue Simple Cloth Wall.

His floor looks like a playmat with Jointed Mat Flooring, which shows his playful side. Despite it looking simple and plain, Punchy sure keeps his place tidy!

Because he’s one of the originals in this game, Punchy has a notable fan base in different Animal Crossing communities. Thanks to AnimalCrossingPortal’s constant polls, we know where he mostly stands.

He’s pretty popular! You’ll see lots of fan art and fan-made merch of him. A quick peek at Nookazon will show you his current demand.

How To Get Punchy in Animal Crossing?

Whether you try Mystery Tours or the Campsite method, Punchy might not be that easy to get. Out of the 23 cats that we have in New Horizons, three are Lazies.

So if your game rolls for cat and Lazy, you have one in three chances to get Punchy through tours. For the Campsite, there are a total of 63 Lazy villagers.

What to Gift Punchy?

Giving gifts to Punchy will increase your friendship with him!

You can gift him items in blue or aqua, since those are his favorite colors. A running joke among fans is to give cat villagers litter boxes or cat towers. I’m sure Punchy would appreciate it!

For clothes, you can give him ones with a Simple style, like this Dress Shirt he’s wearing. Other suggestions are an Energetic Sweater and Flannel Shirt.

Or give him a shirt with his face on it. Double the Punchy, double the smug!

Punchy in the DLC

Try giving him a Cat Tower. He can play with it!

What kind of villager is Punchy?

Punchy is a Lazy villager.

Is Punchy a good villager?