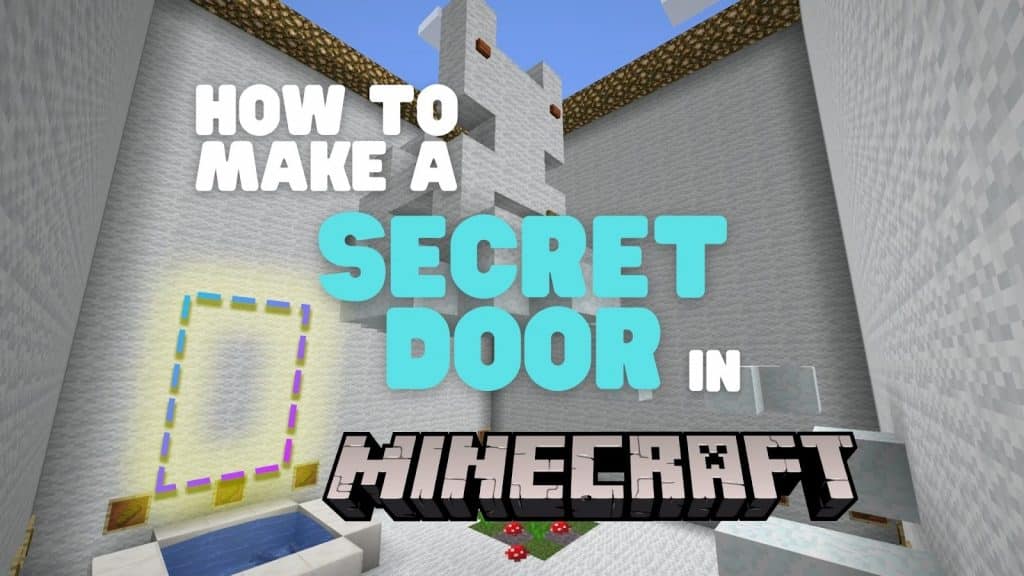 Home security is a real problem in some PvP Minecraft servers. So much so, in fact, that many players will invest a lot of time into building traps that keep sneaky thieves out.

But in a game like Minecraft, traps can only do so much; with enough time and creativity, any trap can be circumvented.  In this article, we’ll show you how to make a secret door in Minecraft that’s hidden so well that any would-be thief will walk right past it.

Here are a few clever ways you can use the environment to create a secret door to your hidden vault.

This horror movie classic is about as simple as secret doors get. All you have to do is build a hole that leads to your secret stash then cover up the entrance with a painting.

Not only does it keep your goods hidden away from potential thieves, but the painting also helps you find the location of your stash. Depending on the theme and style of your home, the right painting can also add to the decor and atmosphere.

The only downside to the painting trick is that it’s so popular. Minecraft veterans will instinctively test any paintings for secret entrances.

If you’re really concerned about security, you’ve probably already considered an underground vault. You don’t need any fancy materials or complex Redstone circuits to make one (it’s basically a fancy hole in the ground).

All you have to do is close up the entrance with some blocks that match the ground around it. Voilà! A simple vault with an invisible entrance.

Of course, this simple construction requires you to break and replace the entrance blocks every time you enter and exit your vault.

For those who want something a bit more elegant, YouTuber Fed X Gaming has a nifty tutorial on how to make a button-activated entrance that’s powered by Redstone.

Whether you’re going with simple blocks or want that fancy door, just remember to close your entrance when you’re not in the vault. After all, what’s the point of a secret vault if you’re always leaving it exposed?

Using the power of Redstone, you can build a secret door in the middle of a lake of lava. This ultra-secure hideaway entrance is also a potential hazard to your health. Just take care where you put your feet, or you may end up burnt to a crisp.

The hardest part is finding a lava pool on the surface. Lava occurs naturally everywhere underground but only spawns in the Desert biome on the Overworld surface.

The Desert biome isn’t exactly a great place for your headquarters since many of the best crafting materials are impossible to find there.

One option is to create your own lava pool. Fill a bucket up with lava, dig up an area about the size of a pool, then pour your lava in to make it a pool.

This has its own drawbacks, however. While it’s cool to have a lava pool in, say, a Snowy biome, since lava doesn’t naturally occur on the surface, you’re pretty much signaling to other players that you’ve got a base hidden there.

Creative Minecraft YouTuber Wiederdude has an awesome tutorial on how to make a piston-powered secret door in the middle of a lava lake.

An underwater base is only second in “coolness” to the lava stash above, with the added benefit of not potentially bursting into flames with a single misstep.

When you’re underwater, the reduced visibility and maneuverability also help to keep your aquatic cove hidden away from potential intruders.

As with the lava, when you’re dealing with water, you have to take care not to let the water flow into your base. YouTuber Wiederdue goes over a simple trick using Redstone torches to prevent water from flooding your underwater base.

How you close and open the door is up to you. Lecterns, concealing levers, piston-powered doorways — there’s a host of options to pick from.

If you play Minecraft online with other players, it’s always a good idea to have a special place where you can hide your most valuable items. After all, you never know where prying hands can get into when you aren’t around.

We hope this short guide has inspired you to try something new with your Minecraft base. Good luck.