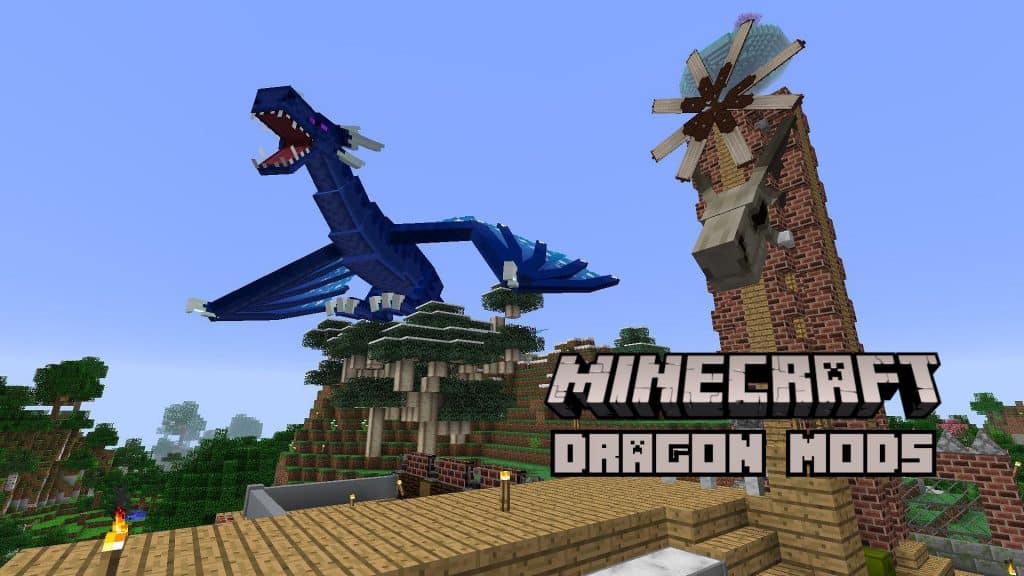 Every Minecraft player at one point has probably fantasized about riding the Ender Dragon, but currently, in Vanilla Minecraft this has not been possible for the past 10 years.

Well, a few dragon mods on this list allow you to do this, as well as give you the opportunity to add helpful machines and tools that can make you become as powerful as a Drake using the Draconic-inspired ore.

8 distinct species of dragons are included in the Dragon Mounts mod. They’re all tamed and rideable.

Though you’re going to need to adventure in the depths of your world to find their lucrative dragon eggs, which can only be spawned in loot chests in Mines and Dungeons.

This mod makes getting around your Minecraft world far more interesting than simply walking, riding a horse, or using your elytra.

The only real downside to this mod is that the dragons do not actually breathe fire, rather the mod is to be installed in your world if you’re looking for a unique way to get around.

If you’re looking to become an actual Dragon in Minecraft, you’ll want to check out the Dragon Survival mod. This mod allows you to gain all the abilities of a dragon, including flight, fire-breathing, and strength.

In order to become a dragon, you’ll need to find and collect dragon scales. Once you have enough, you can then use a Dragon Transformation Scroll to turn into one of these powerful creatures.

There are multiple different types of dragons included in this mod, so you’ll have plenty of choices when it comes to deciding which one you want to transform into; from size to color to even the color of your dragon breath.

This is a mod pack that isn’t really about dragon flying but rather becoming as powerful as one. The mod pack adds new ore blocks, powerful tools, machines, and items to the game so you can become seriously OP in your Minecraft world.

Of course, it’s not just about dealing with damage. The items also help you to be more efficient in the way you play Minecraft, so that you can build and mine much faster, allowing you to finish large-scale projects much faster, whilst having the added fun of playing around with the Draconic Evolutions mod pack.

If you’re looking for a mod that truly recreates the feeling of being a powerful dragon in Minecraft, you’ll want to check out Ice and Fire: Dragons.

The biomes in which ice and fire dragons may be found are determined by the temperature. Lightning dragons can be found in the Savanna, Badlands, and Jungle biomes, respectively.

However, be cautious underground since there’s a little chance of stumbling on one of these dragons in their own dragon cave.

The dragons you find across your world, the ones that are trying to kill you, are not tamable. The only way to get your very own Dragon is if you find and kill an adult female – simple enough, right?

Well, that is definitely easier said than done. You’re going to have to bring your best Netherite Gear if you want to stand even a chance at taking one of these powerful Dragonic creatures down.

Wyrmroost is a mod that focuses on the dragon-taming aspect of Minecraft. It allows you to tame dragons, have them fly you around, and even breathe fire.

There are different types of dragons to tame, each with its own abilities and looks. Not all dragons are tamable, but when you do find one that is, it will offer unique benefits.

Some dragons, for instance, help you to clear grass and dirt blocks much faster, whilst others’ expertise lies in helping you mine cobblestone, stone, and other stone blocks.

So if you’re looking to add dragons to your world that you can fly, tame, and that will actually be useful outside of exploring your world, then this is the mod you’re going to want to install.

World of Dragons is another Minecraft mod that focuses on dragons and dragon abilities. It allows you to tame and control a wide range of dragons, from baby to ancient, each with their own unique abilities and skills.

Not only this, but your entire Minecraft world is going to be dominated by Dragons. They are not going to be rare spawns like the other mods, you are living in their world once you install this mod pack.

What does this mean for you? Well, you’re going to have a treacherous time even if you simply want to cut down a tree. But if you manage to harness their power, you’ll be able to become powerful and be the ruler of the Dragon world.

If you’re on a not-so-great PC and you want Dragons in your Minecraft world, the previous mods are definitely going to be too much for your system.

But this final entry, Less Tech More Dragons, helps to get around the bad tech of a user, and allows anyone, regardless of PC specs, to add dragons to their world.

Another great part of this mod pack is that it is simply just dragons. No weird tools, machines, or anything else like that – it sticks to the medieval feel of just having dragons in your world, without all the added stuff the other mod packs bring to the table.

So if you’re on a low-end PC or you just want a simple dragon mod, this is it.

And there you have it, the 7 best Minecraft dragon mods. Whether you’re looking for a mod that focuses on just dragons or one that completely changes your world to be dominated by these creatures, there’s definitely something here for you.

So install one of these mods and start your journey to becoming the ultimate dragon trainer in all of Minecraft. Good luck!